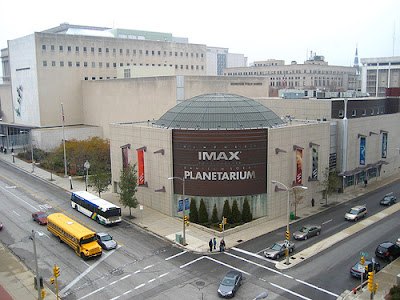 Milwaukee, WI, USA — Milwaukee Public Museum has announced today that it has received a $1.6 million gift from the Daniel M. Soref Charitable Trust for revitalization of its dome theater. The project will feature digital upgrades that will allow the Museum to show immersive 3D shows, as well as provide for the eventual replacement of the theater’s current film projection system.
The project will be implemented in phases over the next three to four years, with the first phase, the upgrade to 3D capability, being completed by October of this year. In conjunction with this endeavor, MPM has also entered into a partnership with National Geographic to provide 3D content for the theater.

“As the technological hub of the Museum, it’s key that the theater feature the best systems available today. We’re proud to help make this possible and to continue our support of this vital community resource,” said Audrey Strnad, trustee of the Daniel M. Soref Charitable Trust.
Once the 3D upgrades are completed, the theater will be renamed the Daniel M. Soref National Geographic Dome Theater & Planetarium. The Trust also funded the development and creation of the original Daniel M. Soref Planetarium in 2006.
“This theater revitalization project is a great thing for the Museum, and will be the first of many technological upgrades we hope to make here at MPM over the next several years,” said Jay Williams, president and CEO of the Milwaukee Public Museum. “We’re grateful to the Daniel M. Soref Charitable Trust for helping to make this great endeavor possible.”
About the Milwaukee Public Museum
The Milwaukee Public Museum is a human history and natural science museum located in downtown Milwaukee, Wisconsin. The museum was chartered in 1882 and opened to the public in 1884. MPM has three floors of exhibits that encompass life-size dioramas, walk-through villages, world cultures, dinosaurs, a rain forest and a live butterfly garden, as well as the Daniel M. Soref National Geographic Dome Theater & Planetarium. The museum houses more than 4.5 million objects and hosts nearly half a million visitors each year.
The MPM is operated by Milwaukee Public Museum, Inc., a private, non-profit company, and its facilities and collections are held in trust and supported by Milwaukee County for the benefit of the public. The MPM is located at 800 W. Wells St. Admission, hours and event details on the web at www.mpm.edu.

Joe Kleimanhttp://wwww.themedreality.com
Raised in San Diego on theme parks, zoos, and IMAX films, InPark's Senior Correspondent Joe Kleiman would expand his childhood loves into two decades as a projectionist and theater director within the giant screen industry. In addition to his work in commercial and museum operations, Joe has volunteered his time to animal husbandry at leading facilities in California and Texas and has played a leading management role for a number of performing arts companies. Joe previously served as News Editor and has remained a contributing author to InPark Magazine since 2011. HIs writing has also appeared in Sound & Communications, LF Examiner, Jim Hill Media, The Planetarian, Behind the Thrills, and MiceChat His blog, ThemedReality.com takes an unconventional look at the attractions industry. Follow on twitter @ThemesRenewed Joe lives in Sacramento, California with his wife, dog, and a ghost.
Share
Facebook
Twitter
Linkedin
Email
Print
WhatsApp
Pinterest
ReddIt
Tumblr
Previous articleLeaders from Giant Screen, Digital Dome, and Exhibit Design to Speak at Jackson Hole Symposium
Next articleComedienne and Actress Phyllis Diller Dead at 95