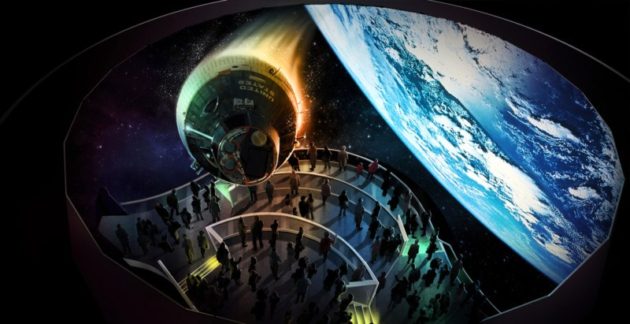 Designed to be the first stop upon entering the complex, Heroes & Legends will use the early years of the space program to explore the concept of heroism, and the qualities that define the individuals who inspired their generation. The 20,000-square-foot, retro-fitted building will marry cutting-edge technology with mesmerizing special effects, priceless artifacts and thought-provoking exhibits. The overall experience is meant to instill a renewed sense of pride and a more in-depth understanding and appreciation of the qualities of heroism represented by NASA’s pioneering astronauts.

A schedule of public events follows:

November 11-13: Complimentary admission will be offered for active and retired members of the military, as well as veterans. Family members will receive up to 3 tickets at a 50 percent discount.

Friday, November 11: All guests are invited to join more than 25 NASA astronauts, including Buzz Aldrin and Jim Lovell, as well as the children of Neil Armstrong, Alan Shepard and others, to celebrate the grand opening of Heroes & Legends featuring the U.S. Astronaut Hall of Fame presented by Boeing. The program will begin at 10 a.m. and guests will be welcome to experience the new attraction after the program.

Saturday, November 12:  Two different Tell Me a Story…Live! shows will take place in the Astronaut Encounter Theater. Space shuttle astronauts Rhea Seddon and Mary Cleave will discuss the topic of Women in Space at 11 a.m. At 1 p.m. Apollo astronauts Al Worden and Walter Cunningham will share memories of the historic Apollo program.

Saturday, November 12:  Astronaut Scholarship Foundation will host the Astronaut Autograph & Memorabilia Show from 10 a.m. to 4 p.m. Entry to the event is included with admission to Kennedy Space Center Visitor Complex. Signing fees will apply for autographs.

Heroes & Legends featuring the U.S. Astronaut Hall of Fame presented by Boeing, designed by Falcon’s Creative, will not only bring to life the enthralling stories of America’s pioneering astronauts, but also invite guests to vicariously experience the thrills and dangers of America’s earliest missions through high-tech elements and special effects, including simulated holograms and augmented reality.

The highlight is a 3D omnidirectional theater, designed to make guests feel as though they are floating in the vastness of space. Stunning images will envelope them as legendary astronauts, including Alan Shepard, John Glenn, Jim Lovell and Neil Armstrong, invite them to join in their epic journeys into the vast unknown.

Joe Kleimanhttp://wwww.themedreality.com
Raised in San Diego on theme parks, zoos, and IMAX films, Joe Kleiman would expand his childhood loves into two decades as a projectionist and theater director within the giant screen industry. In addition to his work in commercial and museum operations, Joe has volunteered his time to animal husbandry at leading facilities in California and Texas and has played a leading management role for a number of performing arts companies. Joe has been News Editor and contributing author to InPark Magazine since 2011. HIs writing has also appeared in Sound & Communications, LF Examiner, Jim Hill Media, and MiceChat. His blog, ThemedReality.com takes an unconventional look at the attractions industry. Follow on twitter @ThemesRenewed Joe lives in Sacramento, California with his fiancé, two dogs, and a ghost.
Share
Facebook
Twitter
Linkedin
Email
Print
WhatsApp
Pinterest
ReddIt
Tumblr
Previous articleGateway Ticketing to Offer Three Unique In-Booth Educational Sessions During IAAPA Attractions Expo
Next articlePGAV Destinations Creates New Exhibits for Becky Thatcher House at Mark Twain Boyhood Home and Museum