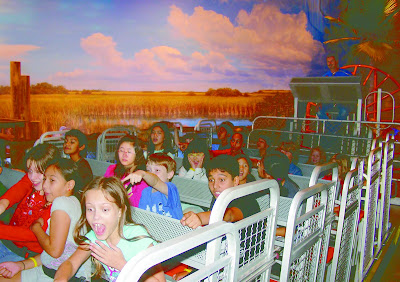 This is Part Two of a two-part article.
Click here for Part One: Edmonton’s Capitol Theatre

“It is the first apparatus ever used, or constructed, for synthetically demonstrating movements…photographed from life, and in its resulting effects is the prototype of all the various instruments which, under a variety of names, are used for a similar purpose….”
—Film Pioneer Eadweard Muybridge on his invention, the Zoofraxitrope, 1898

The day before Eadweard Muybridge passed away, opening day visitors to the 1904 Louisiana Purchase Exposition were astounded as they entered a railroad car with a rear-projected screen on one end and with lugs moving on a conveyer belt under the car to create the illusion of a train in motion. Hale’s Tours, created by a former Kansas City fire chief, would eventually become popular attractions at more than 500 locations worldwide. Almost exactly 13 years later, French silent film director Abel Gance amazed audiences at the Paris Opera when two additional screens were added to the sides of the one on which they had been watching his five-hour epic, Napoleon. This triptych designed for the film’s finale, utilizing three synched projectors, created a new widescreen aspect ratio of 4:1… 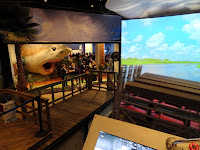 Research In The Swamp
Ensing recalled researching the attraction: “I had been on several airboats just for fun, and then took Mark [Hogan of Mad Systems, who programmed the software for the attraction] and Serguei [Kozlovski, Project Manager for Mad Systems] so they, too, got a feel for how an airboat moves. We went on one of the larger boats, but I felt that it didn’t adequately convey the right kind of movement that we wanted for this one. We wanted to give it the feel of a much smaller boat: The larger ones do not tilt much from side to side, and that would have made the ride a lot less exciting. “We therefore hired a much smaller boat, a six-seater, with a very experienced driver who took us into the swamps for a couple of hours to give us the right ‘seat of the pants’ type of feeling that we would need to program the unit. The lesson involved rapid acceleration, steep cornering and even spins. At one point, we executed a beautiful spin and found ourselves traveling backward. The session we had with the smaller boat had a significant impact on how we programmed the ride.”
“We hired a six-seater boat, with an experienced driver who took us into the swamps to give us the right ‘seat of the pants’ feeling to program the unit.”
Matching The Pattern
Once inside the theater, hand-painted dioramas by local artist Rob Evans surround the motion simulator, which is designed to look like an airboat parked at a dock. According to Ensing, “The motion base is situated four feet below ground level in order to give the effect of the boat floating on water.” The dock is comprised of wood-covered, steel- framed retractable bridges that allow visitors to enter and exit the ride vehicle over the pit for the six-degrees-of-freedom (DOF) motion base. The fan and operator control platform, both mocked up as part of the boat, remain static at the rear while the 20-passenger seating area, attached to a Moog pneumatically assisted electric motion base, splits off from the rear and center parts of the vehicle. The boat set piece was fabricated by 1220 Exhibits while the structural moving bridges and controls were designed and built in-house by Mad Systems.
“We often use a programming waldo for programming, but decided to use a different method for this unit,” said Ensing, “We found a device that normally is used to give 6-DOF control to a CAD operator when using software such as AutoCAD or 3D Studio Max, and Mark wrote the necessary software to use that as an input device. It took quite a bit of filtering to get the feel of the unit right but, after a few iterations of different software filters and filter settings, Mark got the unit to work perfectly for me to be able to program the ride.” 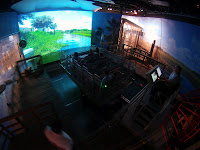 Safety, Safety And Safety
With humans riding the 5800-pound payload motion base and a four-foot pit, safety is of utmost importance. Safety components and inclusion sensors are placed throughout the space, including on each of the bridges, forming a dual- layer security screen. If a single sensor or safety device is penetrated, the boat will stop completely. In addition, the ride operator has a monitor hooked up to four infrared cameras above the boat. If something out of the ordinary appears to be happening, the operator can easily hit an emergency stop button bringing the ride to a full stop. The main operator’s console is located in front of the driver’s seat.
According to Ensing, “It is simplified as much as possible to allow the operators to have access to basic functionality without overwhelming them with anything they don’t normally need. To the right is a touch monitor that actually shows  a plan view of the theater with status of safety devices and various functions laid over that map. “The available functions are set up so they are only the relevant functions that they need for any given phase of the ride. There is a microphone on the console, an E-stop button and the main ride control interface comprises two buttons that are lit when they are valid: the green ‘start’ and the yellow ‘stop’ button. The ‘stop’ button would cause a normal termination of the ride; the base is taken gently to the home position, and the decks are driven in to allow visitors to exit/enter the ride vehicle.” The attraction’s second, and much larger, console is rack-based and ties in directly with the PLC.
The film was directed and shot by cinematographer James Neihouse, who taught NASA astronauts how to shoot in space with IMAX cameras.
Close And Tight
The film is projected from a ceiling mounted Panasonic DP-12000U fitted with an ET-D75LE zoom lens and pushed close to the 25-foot-wide 16:9 curved screen to prevent screen shadow from the motion base. The Airboat Adventure film itself was directed and shot by Florida native James Neihouse, a cinematographer with many space films to his credit, who taught NASA astronauts how to shoot in space with IMAX cameras. According to Cavendish, “The shoot was a pain. There was a drought at the time and we were not allowed to film in the places we needed: places where airboats go.” 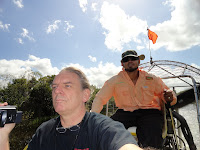 Mad Systems worked closely with Neihouse to make sure the film perfectly matched the motion of the ride base. When entering the theater, a video plays on the screen evoking the sense of being on a docked boat. Once the safety spiel begins and the bridges retract, there is s slow progres sive buildup from the initial dock, curving through the swamp to the final destination, an approximately four-minute ride in all.

The film is supplemented by wind and spray effects, which come from above the boat using devices fabricated by 1220 Exhibits and tied into Mad Systems’ DMX. Ensing added that Mad Systems’ staff “did not go on any of his shoots,” but did coach Neihouse on how the ride film had to work to ensure continuity of motion during the ride. “The basic information that we gave him was to ensure that there would be no discontinuities between cuts: no change from a right turn cutting into a left turn and issues like that because you can obviously not come up with a credible motion to convert between the two. In fact, one of the huge things with motion base programming is to make sure that you follow the horizon in a credible fashion to avoid motion sickness, something that I always spend a lot of time on.”

Audio runs through a QSC DSP Basis 66 Sound & Communications 922az, while the entire show is controlled by proprietary software from Mad Systems, including its Tea Party system and Dash video server. Sound design was mastered to prevent contamination of the adjoining galleries. It all starts with 20 small Bose FS3 speakers mounted be hind the seats on the motion base, two Bose 402 speakers at the front of the theater and eight Bose linear array loudspeakers, split into two clusters overhead in the theater. Mad set the system up to use the Haas (or “precedence”) effect, with the two front speakers creating the low volume primary audio wave. Overhead, eight Bose MA12 linear array speakers are grouped into two fixtures, each about 12 feet wide and pointing straight down, dampening at the screen and the rear of the motion base. Installed behind each seat rest are 20 Bose FS3 speakers, which are slightly delayed to allow the primary sound source to come from the front and overhead speakers. For bass, 10 Butt- kickers are installed within the motion base while a Bag End bass speaker is installed under the operator’s seat. With this creative design scheme directing audio directly to the riders, sound levels can reach 100db at the riders’ ear levels, while simultaneously creating no more than an additional 3db over background noise levels in the adjoining gallery. 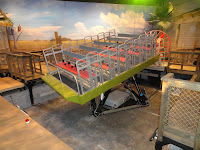 In the preface to his 1898 book, On Animal Motion…, Eadweard Muybridge speculated about moving pictures where people could be heard speaking onscreen, and about three-dimensional images that would be viewed through special binocular glasses. Had he met David Willrich and Maris Ensing, he would have learned how immersive audio can surround a listener and help guide a story and how three dimensions can be created without showing a 3D film. In order to successfully complete the challenges presented to them, Willrich and Ensing (who used to be business partners some years ago) have taken on roles beyond that of traditional systems integrators. They are also integrating ideas of creativity and technology, fusing them, as their predecessors did more than a century ago, into experiences that educate and enthrall their audiences… and also pointing to where AV integration in general seems to be headed: a convergence of many technologies and disciplines.
This is Part Two of a two-part article.
Click here for Part One: Edmonton’s Capitol Theatre

Judith Rubin
Judith Rubin ([email protected]) is a leading journalist, publicist, strategist, blogger, content marketing specialist and connector in the international attractions industry. She excels at writing about all aspects of design and technical design, production and project management. Areas of special interest include AV integration and show control, lighting design and acoustics, specialty cinema, digital video and world’s fairs. Judith has ties to numerous industry organizations. From 2005-2020 she ran communications, publications and social media for the Themed Entertainment Association (TEA). In 2013, she was honored with the TEA Service Award. She was development director of IMERSA, and co-chair of the 2014 IMERSA Summit. She was publicist for the Large Format Cinema Association in the 1990s, now part of the Giant Screen Cinema Association (GSCA) and has also contributed to the publications of PLASA, IAAPA and the International Planetarium Society. Already making her mark as a magazine and book editor, Judith joined World’s Fair magazine in 1987, which introduced her to the attractions industry. Launching as a freelancer in the mid 1990s she has contributed to dozens of publications and media outlets including Funworld, Lighting&Sound America, Sound & Communications, Urban Land, The Raconteur and The Planetarian. She joined InPark in 2010. Judith earned a Bachelor of Fine Arts from Pratt Institute. She has lived in New York City and the San Francisco Bay Area, and now makes her home in Saint Louis, where she is active in the local arts and theater community.
Share
Facebook
Twitter
Linkedin
Email
Print
WhatsApp
Pinterest
ReddIt
Tumblr
Previous articleAdler Planetarium Premiering Real Time Tour of the Universe in 8K x 8K Resolution
Next article4D Comes of Age, Part One: Edmonton’s Capitol Theatre