At nWave, success has many dimensions

Light. Colors. Still images moving at 24 frames per second across the screen (or 30 frames…) telling a story of adventure to families, to young and old, in a 15-minute time frame. This is the attractions market – a market nWave has led in production and distribution since the early 1990s. In business for over 20 years with success among amusement parks, aquariums, science centers, zoos and the cineplex – nWave shares some of the secrets to the company’s long-term success.

Do one thing and do it well. In our case, that’s 3D

3D content is and has always been Ben Stassen’s passion and the signature product of nWave. The company only accepts acquisitions that have been filmed and created for the 3D screen. Even though the TV market failed in creating a viable business model for 3D, the attraction market still thrives with films distributed in 3D as an effective, immersive storytelling medium. nWave films have made more than $250M worldwide and the company has been called “the European Pixar.”

Lately, we have been asked whether the waning of 3D in commercial cineplexes as well as the home market will make us de-emphasize 3D in the attraction market and the Giant Screen industry. From our point of view, the primary reason 3D did not move forward in commercial markets has to do with quality. Too many opted for the easier route of creating 3D behind the screen as opposed to in front of the screen. This diminished the visual effect and immersive quality, and this is why consumers have come to resist paying more for 3D over 2D – they don’t see

any outstanding value there. Our 3D is still in front of the screen maintaining the truly immersive quality that keeps our 3D films successful and clearly differentiated from a 2D experience.

nWave began in the simulation market providing ride films, then expanded into the Giant Screen sector with 3D films, then enthusiastically jumped into 4D attractions, where we had immediate success with the film Pandavision. We have maintained a continuous, high level of business success in all three markets over three decades – even in the face of continual change.

Markets change over time – technology is a leading factor – and the companies that change with the market are companies that stay successful. nWave foresaw and foretold many of the changes that have affected our markets. It’s important to be observant, to listen to clients’ concerns, and to be prepared to adapt to change. Throughout, the one thing that we work hard to keep constant is quality.

These days, there is a lot of buzz about Virtual Reality (VR) and Augmented Reality and how they might fit into a specialty producer’s overall scheme of multi-platforming and content creation. These are some of the new platforms for cinematic content that keep popping up, thanks to digital technology.

Again, the consumer drives the industry, and the consumer notices quality. Many companies are diving in head-first to provide first VR themed installs at amusement parks and museums; however if the content quality isn’t there, then the market will die quickly. There are challenges to VR in particular: the quality of the resolution is not as good as theater systems, it is not a shared experience, the headset is expensive, hygiene is a potential issue. Costs will come down as the technology advances, so VR could find a lasting place, for instance in simulation experiences – if designers and operators can solve the challenges of monetization and throughput. 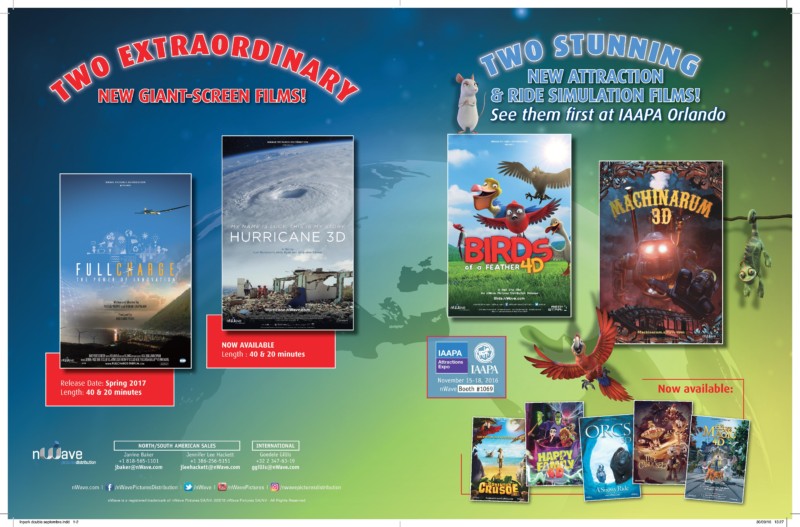 Be truly international; be versatile; know your consumer

nWave is an undisputed leader in the production and distribution of content for rides, attractions and Giant Screen cinema. We maintain a large worldwide client base and in doing so naturally encounter challenges in serving a wide variety of countries with diverse business cultures.

These challenges and differences make us stronger as a company because they teach us about the nature of the markets we serve. With offices and staff around the world, we use the company’s in-house international diversity to support this. Our teams review the films submitted for distribution and give feedback on what will or will not work in each territory. We have a lot of Moms on our distribution team which helps us look at films from the point of view of the primary decision maker on the consumer end. Ours is one of the very few distribution teams that is female populated and gives us an advantage of insight into the market.

Be adaptable to change – always – and keep them coming back

We couldn’t do any of the above if we didn’t follow this maxim. No matter how established your company, how many years in business, how big your client list, stagnation can creep in. New companies form and compete with you. New clients enter the market who never heard of you. Your client list can shrink – a company goes out of business or is acquired; there are changes at the top and you lose your best contacts; a competitor courts them and succeeds; your product no longer fills the needs of the market…

In addition to being adaptable to change, it’s important to gauge it. A new platform doesn’t necessarily displace an established one. A new platform represents opportunity. VR and AR will not be replacing the 3D experience or the Giant Screen theaters any more than 4D replaced simulation. VR is an experience that, if done well, can add value to the guest’s stay and complement other media experiences. The key is in knowing how to effectively plan a content program so that each experience unfolds in a satisfying way that motivates the customer to come back for more. Generally, the difference between whether something is a novelty or fad versus a long sustaining business comes down to marketing and content. The consumer will naturally be drawn to try something new that stimulates the senses but it is the high quality of the content and valued experience that will keep that same consumer returning again and again. Meet the expectation and then go beyond for the audience to want to pay for it again and recommend the experience to friends.

The House that Ben Built

Our diversity of voice and style in storytelling with our producer partners adds to the versatility as well as the different topic choices for our clients in the various markets. In addition, our films are for families and school groups while keeping to current topics and high resolution that audiences expect. Quite frankly, if the theater and film don’t live up to or surpass the Ultra High Definition that you can see in your home, no one will pay for it.

Believe in your product and industry

I believe the people I work for are extraordinary human beings. They are driven, they believe in hard work and they inspire me to achieve. I have been with this company for almost 10 years which is a long time in any company. I believe in the product and the people. I believe in my clients who are also passionate about what they do. I am not interested in working with people who punch a time clock and are all about the money. I love the people of passion who believe in a dream – this is the magic that drives anyone towards success.

Meet us and see nWave content at IAAPA Orlando

In the nWave exhibit booth at the 2016 IAAPA Attractions Expo in Orlando this November, we will be showing our recent release Robinson Crusoe, which continues to be very successful. We will also showcase two new ride films and one new attraction film as well as two that are in production and several in development. Coming in 2017 we have two new Giant Screen titles and well as one in development. nWave will also have a VR film on display at the IAAPA Attractions Expo this November in Orlando.

Our model has always been to continually release new films every year as well as continually develop for the future while looking to new platforms for distribution. We will always distribute in 3D – and for multiple platforms – in the highest quality possible. • • •

Janine S. Baker, SVP nWave Film Distribution ([email protected]) began her entertainment career working in licensing for EMI Capitol Records. She began her attraction career after joining Simex-Iwerks film department in 2002 then joined nWave Pictures Distribution in 2007 as Senior Vice President of Film Distribution & Development where she successfully oversees the Giant Screen, 4D attraction and ride film market for nWave Americas. She has been on various panels speaking on distribution and has been a judge for the Jackson Hole Wildlife Film Festival.

Joe Kleimanhttp://wwww.themedreality.com
Raised in San Diego on theme parks, zoos, and IMAX films, InPark's Senior Correspondent Joe Kleiman would expand his childhood loves into two decades as a projectionist and theater director within the giant screen industry. In addition to his work in commercial and museum operations, Joe has volunteered his time to animal husbandry at leading facilities in California and Texas and has played a leading management role for a number of performing arts companies. Joe previously served as News Editor and has remained a contributing author to InPark Magazine since 2011. HIs writing has also appeared in Sound & Communications, LF Examiner, Jim Hill Media, The Planetarian, Behind the Thrills, and MiceChat His blog, ThemedReality.com takes an unconventional look at the attractions industry. Follow on twitter @ThemesRenewed Joe lives in Sacramento, California with his wife, dog, and a ghost.
Share
Facebook
Twitter
Linkedin
Email
Print
WhatsApp
Pinterest
ReddIt
Tumblr
Previous article
eca2: Lighting up the night
Next article
THE PRODUCERS GROUP: Pairs of Aces