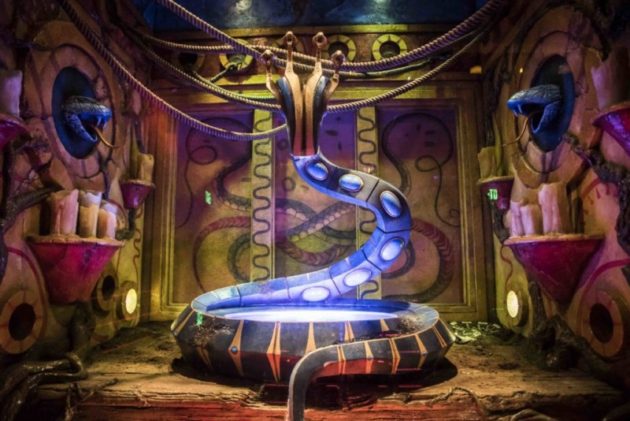 by Judith Rubin and Joe Kleiman

Los Angeles-based The Producers Group (TPG) recently completed work on a pair of roller coasters for SeaWorld Parks & Entertainment and on two high energy shows for Dubai Parks & Resorts. TPG bills itself as “international attraction production specialist” and the company fulfilled that role on these four unique, highly integrated projects, that presented specific challenges in technical design and production management.

The SeaWorld pairing: sharks and cobras

SeaWorld Parks & Entertainment is actively growing its portfolio of thrill rides that tie into SeaWorld wildlife conservation and education programs. TPG was recruited to help create two, new themed roller coaster experiences that opened in Florida in summer 2016 – Cobra’s Curse™, a unique, family oriented spin coaster at Busch Gardens® Tampa; and Mako™ at SeaWorld Orlando, the new hypercoaster within the new realm of the sharks. On both projects, TPG was part of an external team working with SeaWorld’s in-house creative arm. SeaWorld educational and zoological teams were also involved.

The backstory of Cobra’s Curse is an ancient Egyptian archeological mystery. The ride takes riders 70 feet up on a vertical lift where a cobra statue of equal height looks back at them, fangs bared, and delivers the “curse” that sets them spinning along a track above the park’s Serengeti Plain. Detailed theming and storytelling details and effects begin with the facades and queue and continue throughout the ride.

According to Edward Marks, co-CEO of TPG, “One of the highlights of Cobra’s Curse takes place in the queue, where a relief of the Snake King comes alive through projection mapping. We spent a lot of time and research on that, creating 3D models and maquettes. Guests are in close proximity to the wall, so the effect is right on top of them. To make it effective, we found a way to hide a series of short-throw projectors in the area so that guests can’t place their hands in or block the projection cones. The effect has been very popular since opening day.” 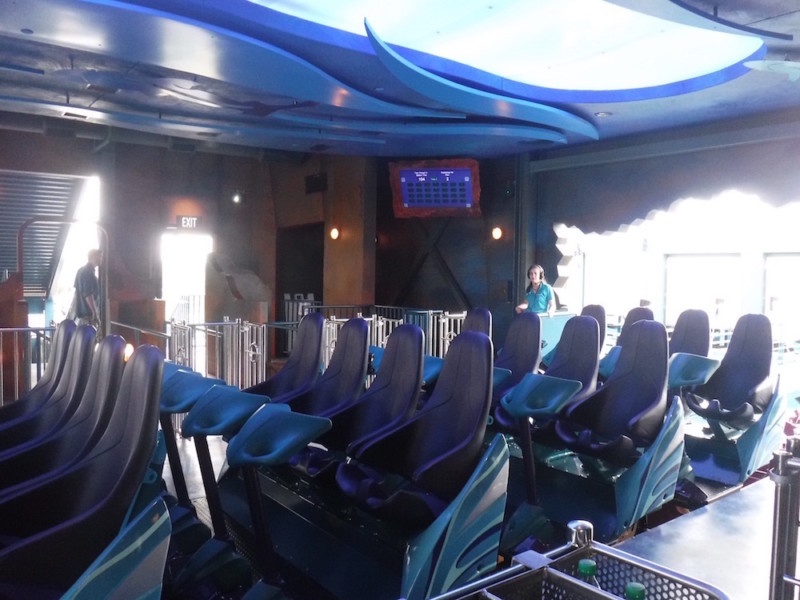 The 200-foot-tall Mako™ hypercoaster was designed to be the tallest, fastest and longest coaster in Orlando, and to move in ways that evoke its namesake creature. Mako sharks or “blue pointers” are known for their speed and ability to quickly change course. The coaster anchors the two-acre Shark Wreck Reef which includes the Shark Encounter attraction, interactive learning exhibits and retail. Said SeaWorld Orlando President Donnie Mills: “Our guests now have a whole new underwater world to explore – and a thrilling new ride to conquer.”

The SeaWorld internal team included Morrow (creative director/project manager), Michael Spencer (project manager), Denninger (ride design and install), and Hornick (regional director for the company’s attractions in Florida). “Bringing in top outside specialists is good for our company,” said Morrow. “It allows us to be most efficient, to find the best talent for individual projects and build the best possible team. It allows us to be fast, nimble, and to make the best choices at any given time in the marketplace and for the type of project.”

“Our work on Mako was geared more towards development of the overall realm and the Shark Wreck Reef, including the queue, rather than the ride itself,” said Marks. “It’s a really remarkable coaster and we wanted to complement that in the new realm. The lighting has an underwater vibe, giving you the impression of walking along the bottom of the ocean. We achieved a seamless effect, concealing the lighting fixtures within scenic elements.”

As guests board the Mako train, an overhead screen shows a school of sharks swimming above, which increase their speed as the train departs towards the lift hill. Marks says, “The ceiling has proven to be very effective in helping keep guests immersed in the experience. We had to take into account that since the station is open to the outside, daylight changes the type of images that are visible. But that was part of the challenge that we were able to meet with the entire project – making sure that all lighting and scenery work properly under all conditions.” 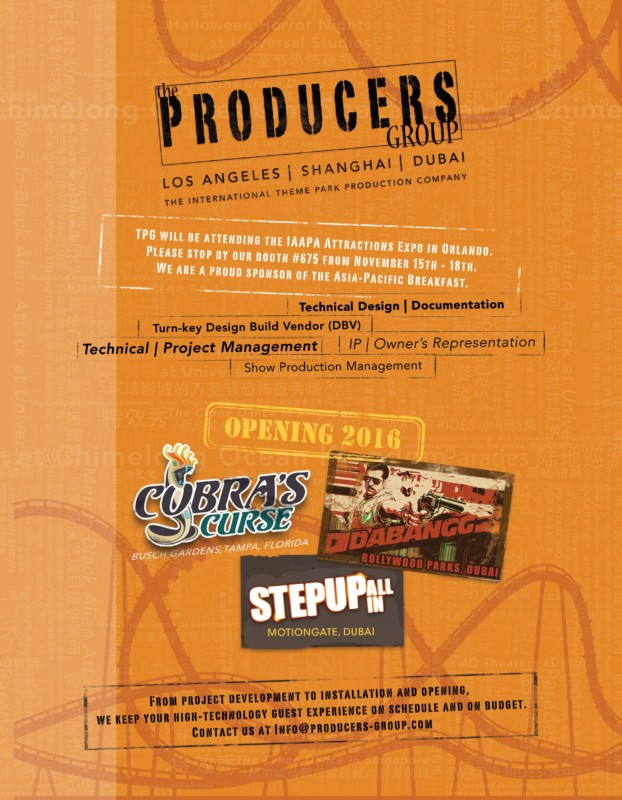 For two projects at Dubai Parks & Resorts, (DPR) TPG brought its battery of tech and production skills to help realize two live shows. Each is based on a contemporary movie franchise with a large international following: Dabangg (Arbaaz Khan Productions) and Step Up (Lionsgate). Both shows are slated to open in late 2016 within the region’s largest integrated theme park destination, which when complete will include motiongate™, Bollywood Parks Dubai, Legoland, a Six Flags park and a waterpark. Each of the parks has its own, separate internal design team. 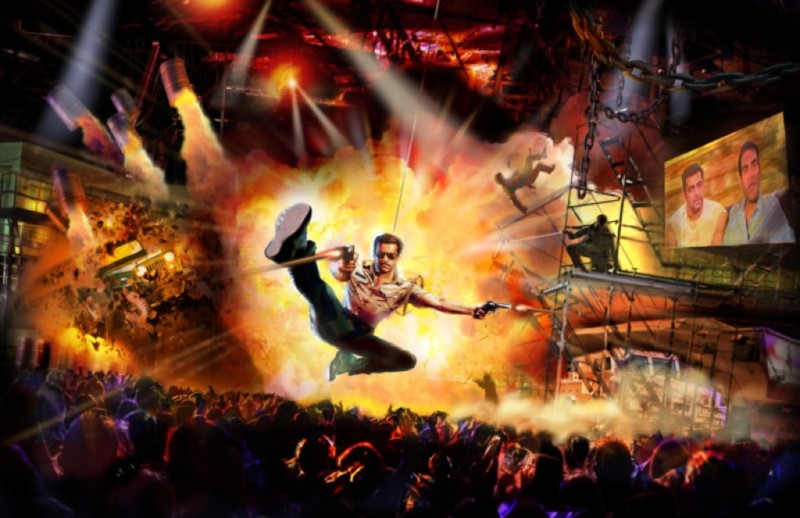 The first Dabangg movie, a hugely popular action film, was released in 2010. Its protagonist, Chulbul Pandey (played in the films by international superstar Salman Khan), is a bold, athletic police officer. (Dabangg 3 is currently in the works.) DPR has announced a mid-December opening for the Dabangg stunt show at Bollywood Parks Dubai. TPG is providing show production and equipment for the show which, to be true to its namesake, demands an elaborate combination of live stunts and effects. “Bringing Dabangg movie stunts to a live show is a challenge requiring precise choreography of live actors with high-end gear, special effects and complex technical integration,” said Dubai Parks & Resorts Chief Technology Officer Matthew Priddy.

According to TPG co-CEO Bob Chambers, the Dabangg show structure takes some inspiration, loosely speaking, from the style of Universal’s popular Waterworld stunt show, with its approach to non-stop action and audience involvement. “We say ‘loosely,’ because in every way, this is a very Indian show,” Chambers said. “There’s a dance number in the middle of it [in the movies themselves, Dabangg and the villains will occasionally pause battle for a bit of dancing]. Even the stunts are very Bollywood – with a fantasy action feel to them. We did quite a bit of rigging to achieve those effects.”

The robust Lionsgate Step Up franchise is currently five movies strong with number 6 on the way. Step Up was born in 2006 with the first movie starring Channing Tatum as a troubled high schooler who finds his path (and love) through becoming a dancer. Subsequent Step Up movies have all played on this basic theme in diverse ways that have far reaching appeal.

The live show that is scheduled to open in mid-November at motiongate™ Dubai, in a 1,000-seat theater in the Lionsgate zone, will feature singing, dancing and acrobatics and is based on the two most recent titles in the series, Step Up: All In and Step Up: Revolution. Unlike Dabaang, where TPG, as show producers, are handling all aspects of the show other than providing performers and stunts, the company is taking on a more limited, but still pivotal role with Step Up, providing a design/build package for the sets, rigging, and lighting, all completely designed to meet the producer’s vision for the show.

In 2016, TPG again expanded. The company established an office in Dubai and moved its Shanghai office to Puxi. “Our old Shanghai office was closer to the Shanghai Disney grounds, which served us well at the time,” says Chambers. “Puxi places our staff of four in better accommodations and closer to corporate and client developer offices.” TPG is also adding staff at its headquarters in Los Angeles.

TPG will soon be able to announce more details of some upcoming projects, which include three contracts recently signed with a Chinese entertainment developer, in addition to being under contract to provide work on a major, global theme park in Beijing. The company also has new projects in Eastern Europe and the Americas. • • •

Joe Kleimanhttp://wwww.themedreality.com
Raised in San Diego on theme parks, zoos, and IMAX films, InPark's Senior Correspondent Joe Kleiman would expand his childhood loves into two decades as a projectionist and theater director within the giant screen industry. In addition to his work in commercial and museum operations, Joe has volunteered his time to animal husbandry at leading facilities in California and Texas and has played a leading management role for a number of performing arts companies. Joe previously served as News Editor and has remained a contributing author to InPark Magazine since 2011. HIs writing has also appeared in Sound & Communications, LF Examiner, Jim Hill Media, The Planetarian, Behind the Thrills, and MiceChat His blog, ThemedReality.com takes an unconventional look at the attractions industry. Follow on twitter @ThemesRenewed Joe lives in Sacramento, California with his wife, dog, and a ghost.
Share
Facebook
Twitter
Linkedin
Email
Print
WhatsApp
Pinterest
ReddIt
Tumblr
Previous articlenWave: 4D revealed
Next articleEXPO 2017+BEYOND: World’s fairs, planned and proposed