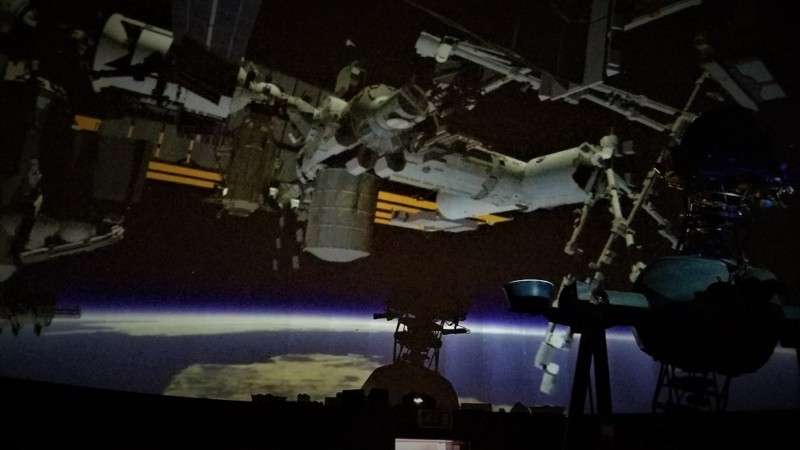 The South Downs Planetarium at the Sir Patrick Moore building in Chichester, Sussex, UK, reopened following a technology upgrade and installation of a new media server and show control system from 7thSense Design.

The upgrade of the 100-seat star theatre was led by Brighton-based immersive experience experts TEQ4. Working closely with TEQ4, 7thSense integrated a single Delta Nano Media Server and show control system as a cost-effective yet powerful solution for the two-channel fulldome display. 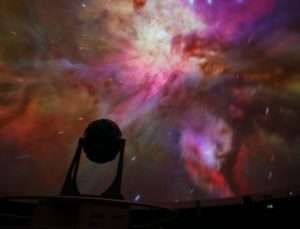 Martin Howe, founder and managing director of TEQ4 commented; “Delta was the obvious package for this project. It can play uncompressed images straight from Fulldome content without the time-consuming slicing that is often necessary. Also, the enhanced User Interface feature allows the operators to control the entire system from a browser running on a tablet. This all-in-one solution avoids the cost and effort it would take to build and configure a separate control system. The team at 7thSense once again demonstrated their partnership approach even though this was a relatively small project, developing new GUI features to suit the specific requirements of this client, which I’m sure will benefit others too. The results on screen are stunning, it’s a bright, sharp colourful display. I’m really pleased that we were able to bring this solution to the South Downs Planetarium. It’s given the theatre a whole new lease of life for a very modest budget.”

7thSense has delivered its Delta software to some of the most prestigious digital planetariums and fulldome theatres worldwide and is renowned as a specialist provider of technology for dome systems, with end-users including the Morrison Planetarium at California Academy of Sciences, the UK’s National Space Centre, the Hayden Planetarium at the American Museum of Natural History and the National Military Museum in the Netherlands.

Richard Brown, CTO at 7thSense explains. “Delta has a virtual 3D dome model internally and a special feature that allows the positioning of multiple projectors in this 3D space. It’s designed to meet challenges presented by dome displays with ease and helps produce the very best display performance on screen.”

“There’s a huge amount of content management and control functionality within this installation – our development team customised the management interface so that any of operators or presenters can lead a show without any training or technical support.” Brown continues. “Inside the theatre, a wireless touchpad allows for easy, intuitive theatre control and instant show management. For a small, relatively simple setup it packs a lot of punch!”

After a seven-year fundraising campaign led by the project’s late Patron Sir Patrick Moore, the Planetarium first opened in June 2001 and has since welcomed hundreds of thousands of visitors through its doors.

Joe Kleimanhttp://www.themedreality.com
Raised in San Diego on theme parks, zoos, and IMAX films, Joe Kleiman would expand his childhood loves into two decades as a projectionist and theater director within the giant screen industry. In addition to his work in commercial and museum operations, Joe has volunteered his time to animal husbandry at leading facilities in California and Texas and has played a leading management role for a number of performing arts companies. Joe has been News Editor and contributing author to InPark Magazine since 2011. HIs writing has also appeared in Sound & Communications, LF Examiner, Jim Hill Media, and MiceChat. His blog, ThemedReality.com takes an unconventional look at the attractions industry. Follow on twitter @themedreality Joe lives in Sacramento, California with his fiancé, two dogs, and a ghost.
Share
Facebook
Twitter
Linkedin
Email
Print
WhatsApp
Pinterest
ReddIt
Tumblr
Previous articleMichele Ferreira Joins Electrosonic as Director of Sales – West Coast
Next articleThe Presidio Visitor Center Opens with AV Support from WorldStage San Francisco