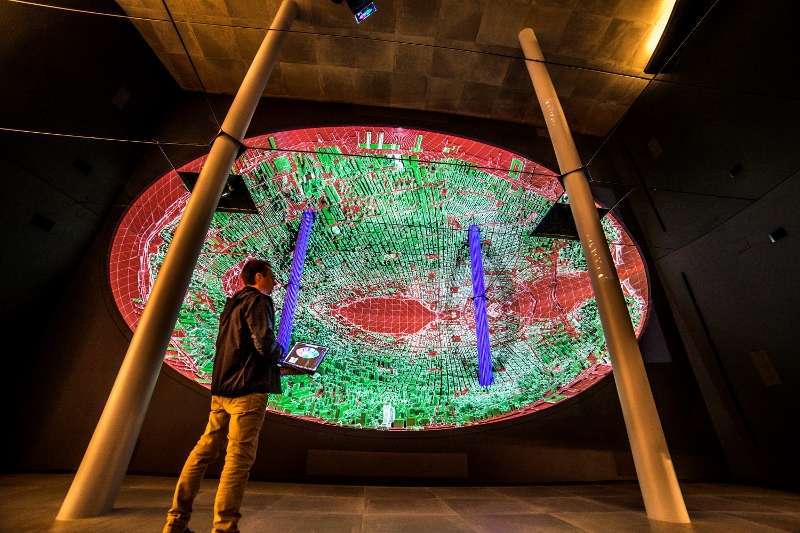 The “XI Gallery” has recently opened in New York’s Meatpacking District – a hybrid art installation and showroom for architect Bjarke Ingels’ luxury residences and a hotel under construction at “The XI” (pronounced The Eleventh) building a few blocks away. Its feature commanding most attention, from both invited guests and the street, is a curiously-shaped, 33-ft wide model of Lower Manhattan, comprised of more than 10,000 miniature 3D-printed and hand-cut buildings. Technology West Group installed and commissioned 7thSense Delta Media Servers to bring projection-mapping life to “The Egg”.

Es Devlin – renowned for her stage design for theater and artists such as Beyoncé and Kanye West, her pieces at Victoria & Albert Museum and Art Basel, an Olympics closing ceremony, and most recently a projection-mapped story at the Cannes Lions Festival of Creativity – is the artist behind The Egg and two other pieces in the gallery.

Devlin’s Manhattan is warped and fitted inside a quarter ovoid shape, using relative scaling tricks to force a unique perspective of the cityscape (including an unashamed emphasis on The XI building). This butts to a mirrored ceiling – a motif employed throughout the gallery – completing the appearance of an egg cross-section.

Ken Showler, Experience Director at 7thSense Design explains, “It takes a team with a lot of respect for accuracy to get a clean mapping result on an object this detailed. A little ‘off’ in the 3D model goes a long way. DBox and Farkas Falop have done an amazing job producing this model and content, positioning TechWest and my crew to produce an alignment we are proud of. Very little traditional 2D pixel warp was used beyond the 3D calibration stage here, and so the accuracy of 3D parallax was minimally compromised.”

“Blending projectors is also a significant challenge on a model like this. For each given pixel of the 3D surface texture, there are a bunch of factors that should drive the decision of how much light is best to take from each projector, to achieve a uniformly lit result using the best quality available pixels. Some model surfaces have one projector hitting them, while others have two, three, or four. Each lens will be a different distance from each given surface, and each lens may have a different field of view, resulting in differences in brightness across the model. Each lens also has a depth of field, and an incident angle at which it hits each given surface, resulting in brighter and less smeared pixels on one surface versus the next. This decision process is managed by an emerging Autoblend tool that will become available officially with our next generation software release. We used an early implementation of this on The Egg with great results.”

Brad Cornish, Principal at Technology West Group adds, “With the detail of the client’s vision and the unique surface that we were working upon, we felt that the Delta Media Server platform was the only choice for a reliable and configurable server for this creative project. The team at 7thSense helped deliver a solid and reliable system, whilst also keeping a flexible platform for the artists to work upon.”

All AV systems were installed and commissioned by Technology West Group (www.techwg.com). 3D model and content production were managed by DBox (www.dbox.com)

The XI Gallery is located at 25 Little West 12th Street and opened to the public on 14 May.

Joe Kleimanhttp://wwww.themedreality.com
Raised in San Diego on theme parks, zoos, and IMAX films, Joe Kleiman would expand his childhood loves into two decades as a projectionist and theater director within the giant screen industry. In addition to his work in commercial and museum operations, Joe has volunteered his time to animal husbandry at leading facilities in California and Texas and has played a leading management role for a number of performing arts companies. Joe has been News Editor and contributing author to InPark Magazine since 2011. HIs writing has also appeared in Sound & Communications, LF Examiner, Jim Hill Media, and MiceChat. His blog, ThemedReality.com takes an unconventional look at the attractions industry. Follow on twitter @ThemesRenewed Joe lives in Sacramento, California with his fiancé, two dogs, and a ghost.
Share
Facebook
Twitter
Linkedin
Email
Print
WhatsApp
Pinterest
ReddIt
Tumblr
Previous articleWorld’s first VR paragliding experience opens in UK
Next articleMAXON debuting newest version of Cinema 4D at SIGGRAPH 2018