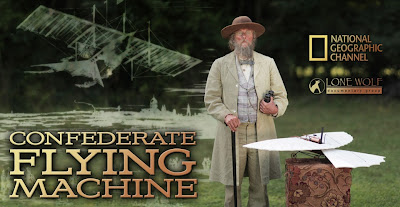 (May 3, 2012) — The conquest of air and space has changed the world.  The diminishing time traveled between great distances has increased the exchange of ideas and development of technology.  Air has changed the footprint of war, and as seen in WWII, expedited its end.  What if history had taken a different path?  What if the airplane was invented fifty years before the Wright Brothers’ historic flight?  And what if it had been flown by Confederate pilots, who used them to bomb and decimate Union troops?

In the mid-1860’s, Dr. Roderick O. Davidson had such an idea.  It is said he tested a steam powered flying machine tethered to a train roaring down the tracks.  And when he approached Confederate leaders with the idea to produce a fleet of 500 bombers, he was given $1500 in Confederate currency and 12 weeks to build a working prototype.  After a windstorm destroyed what he had constructed, the idea was lost to history.

150 years later, National Geographic approached Mad Systems, an a/v integration and themed entertainment technology company whose clients include SeaWorld, Landrys Restaurants, and Chicago’s Museum of Science and Industry, to build a duplicate of the plane in three months, using as close to the original materials as possible, with the modern equivalent of Davidson’s 1864 budget.

Did they succeed?  Find out May 10 at 8:00 pm on the National Geographic Channel and follow a live twitter discussion @madsystems during the broadcast.

Joe Kleimanhttp://wwww.themedreality.com
Raised in San Diego on theme parks, zoos, and IMAX films, InPark's Senior Correspondent Joe Kleiman would expand his childhood loves into two decades as a projectionist and theater director within the giant screen industry. In addition to his work in commercial and museum operations, Joe has volunteered his time to animal husbandry at leading facilities in California and Texas and has played a leading management role for a number of performing arts companies. Joe previously served as News Editor and has remained a contributing author to InPark Magazine since 2011. HIs writing has also appeared in Sound & Communications, LF Examiner, Jim Hill Media, The Planetarian, Behind the Thrills, and MiceChat His blog, ThemedReality.com takes an unconventional look at the attractions industry. Follow on twitter @ThemesRenewed Joe lives in Sacramento, California with his wife, dog, and a ghost.
Share
Facebook
Twitter
Linkedin
Email
Print
WhatsApp
Pinterest
ReddIt
Tumblr
Previous articleAttendance at National WWII Museum Reaches Three Million
Next articleThe United States at Korea’s Ocean-Themed World’s Fair