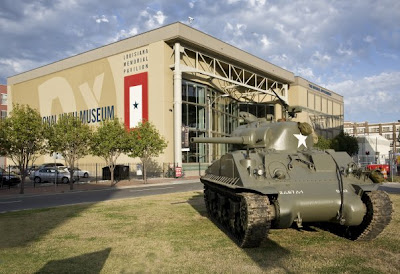 New Orleans, LA, USA (May 2, 2012) /PRNewswire/ — May Day arrived with fanfare at The National WWII Museum as the popular institution celebrated the three million mark in paid visitation since opening in 2000. John and Patricia Carver, from Ann Arbor, Michigan, were greeted by Museum President and CEO Dr. Gordon H. “Nick” Mueller, Chairman of the Board Herschel Abbott, and Museum staff, marking the important milestone.

“We’re thrilled to reach this milestone,” said Mueller. “Like the Superdome and other famous attractions, The National WWII Museum has become a significant economic driver for the city of New Orleans. Increased visitation means more hotel bookings, more restaurant meals and more employment for our city. It’s adding up to a strong recovery, and we’re glad to be helping our hometown.”

The Museum has been building furiously on its six-acre campus, located in the historic Warehouse District. Its latest exhibition space, the US Freedom Pavilion: The Boeing Center, is scheduled to open in January 2013, shortly before the Super Bowl is played in New Orleans. Work has also begun on another new pavilion, Campaigns of Courage: European and Pacific Theaters, which will open a year later.

All of this comes on the heels of the Museum’s 2009 addition, a complex with three major features: the Solomon Victory Theater, where the 4-D cinematic experience Beyond All Boundaries is shown; Stage Door Canteen, home of the famed Victory Belles singing trio; and The American Sector, a John Besh restaurant. These attractions and the new Kushner Restoration Pavilion and Soda Shop, which opened in 2011, have strengthened the Museum’s appeal.

The pace hasn’t let up since with steel rising on new construction sites, in line with a Museum campus master plan.

“We’re not doing it for us,” said Mueller. “We’re doing it for them – the veterans of World War II and the rest of the Greatest Generation. They are leaving us at the rate of 680 veterans a day. We want to complete the campus so those who are left can be welcomed to this marvelous tribute the American people built to honor the men and women who fought and, in many cases, died for our precious freedoms.”

The final phase of the Museum’s master plan calls for the construction of The Liberation Pavilion (scheduled for 2014) and an expansive special exhibits gallery. A proposed hotel, conference center and a parking structure, if built, will finish out the expansion.

The National World War II Museum tells the story of the American experience in the war that changed the world – why it was fought, how it was won, and what it means today. Dedicated in 2000 as The National D-Day Museum and now designated by Congress as America’s National World War II Museum, it celebrates the American Spirit, the teamwork, optimism, courage and sacrifice of the men and women who fought on the battlefront and the Home Front. For more information, call 877-813-3329 or 504-528-1944 or visit www.nationalww2museum.org. Follow us on Twitter at WWIImuseum or visit our Facebook fan page.

Joe Kleimanhttp://wwww.themedreality.com
Raised in San Diego on theme parks, zoos, and IMAX films, InPark's Senior Correspondent Joe Kleiman would expand his childhood loves into two decades as a projectionist and theater director within the giant screen industry. In addition to his work in commercial and museum operations, Joe has volunteered his time to animal husbandry at leading facilities in California and Texas and has played a leading management role for a number of performing arts companies. Joe previously served as News Editor and has remained a contributing author to InPark Magazine since 2011. HIs writing has also appeared in Sound & Communications, LF Examiner, Jim Hill Media, The Planetarian, Behind the Thrills, and MiceChat His blog, ThemedReality.com takes an unconventional look at the attractions industry. Follow on twitter @ThemesRenewed Joe lives in Sacramento, California with his wife, dog, and a ghost.
Share
Facebook
Twitter
Linkedin
Email
Print
WhatsApp
Pinterest
ReddIt
Tumblr
Previous articleEdgeWalk Opens For Second Season of Thrills On Outside of CN Tower Roof
Next articleA Confederate Bomber in Mad Systems’ Court