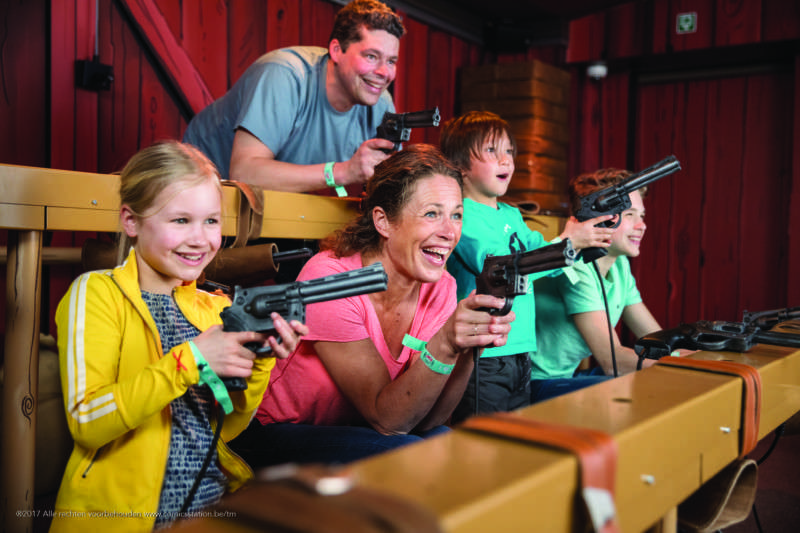 Alterface looks at the evolution of dark rides

For more than one hundred years, dark rides have been a staple of visitor attractions, utilizing special effects and theatrical techniques to create scenes that immerse guests into an imaginary world. During the 19th century, amusement rides like old mills or tunnels of love, where two riders in a boat floated through a man-made canal, were precursors to the dark rides and attractions we experience today.

One of the first technologies to be integrated into dark rides was a gun concept that borrowed heavily from popular shooting galleries. A beam of light from the gun activates targets within the scenery. Sally Corporation presented the concept at IAAPA in 1986, later building their first interactive dark ride, The Great Pistolero Roundup, at Family Kingdom in Myrtle Beach in 1997.

The traditional shooting gallery also inspired us at Alterface. In May 2006 park visitors could mount a saddle at the Desperados interactive theater and shoot at characters on a large screen. Installed at several parks, the Desperados attraction allowed people to sit together and have fun, competing in a saloon-like cartoon environment.

The benefits and options of the modern dark ride

Many parks start seeing the many advantages of interactive dark ride attractions as they can be easily fit into smaller footprints, including repurposing existing spaces. Additionally, they are impervious to weather, shielding guests from temperature swings and rain.

The modern interactive dark ride is perfectly suited for IP theming and storytelling in a customized way for the park and local culture. Most rides are also designed as a team or family experience, but with individual scoring, everyone is included in the fun; everyone gets a chance to compete.

Although the majority of these attractions rely on the concept of shooting items or characters on the screen, it doesn’t have to be that way. Other non-shooting rides will keep the device but configure it for an activity such as taking pictures of animals with a camera, fixing a problem with a wrench, or casting a spell with a magic wand.

These are great alternatives for parks appealing to smaller visitors or those avoiding violence. Nonetheless, the hero narrative is timeless, and guests gravitate to attractions where they can defeat the villain and save the day. A great example is Justice League: Battle for Metropolis at Six Flags, which places visitors in the middle of the action, with interactive and state-of-the art gaming elements developed by Alterface.

Looking ahead, there are many routes the next generation of dark rides may take. While VR and AR integration is one possibility, we see higher potential gain in creating more natural experiences for guests, and incorporating dark ride ideas into other types of attractions.

One thing we at Alterface have been focusing on for years is what we call “natural interactions,” the kind of things people do under certain conditions without instruction. We started with human gesture detection and found out that things as simple as ‘finger pointing’ could result in many different results, even among a homogeneous population.

Whether interacting with your hand or with a device, once you turn away from the simple “click & shoot” you enter a gigantic territory of unexpected behaviors. Therefore, triggering people to do something becomes as important as detecting the very action they perform. This is the reason why Salto!, Alterface’s interactive show control system, has so many vision-based sensors to detect both activity and behavior. If you want to get more sophisticated reactions of the player, you need an even more sophisticated system to track those actions and keep players focused and entertained, all the way through the attraction.

Similarly, we see great potential as dark rides get blended into other attractions as well as opportunities to showcase the ride to guests outside of the building. One elegant case study can be found at Europa-Park with the Arthur ride. The attraction, designed by Mack Rides, incorporates a suspended family coaster with the articulation and programmability of a dark ride. Although most of the attraction takes place indoors, several short segments take the ride outside and over the heads of riders waiting in line. A similar concept just opened at Dubai Parks & Resorts in Motiongate park. We suspect that the dark ride + coaster combination is just getting started in the industry, and we will see more “teaser” moments like those provided by Arthur. Provided there is the right balance between thrill and media, this is a recipe for dark ride success in the coming decades. • • •

Anja D’Hondt is based in Belgium and handles PR strategy and media outreach for Alterface.

Joe Kleimanhttp://wwww.themedreality.com
Raised in San Diego on theme parks, zoos, and IMAX films, InPark's Senior Correspondent Joe Kleiman would expand his childhood loves into two decades as a projectionist and theater director within the giant screen industry. In addition to his work in commercial and museum operations, Joe has volunteered his time to animal husbandry at leading facilities in California and Texas and has played a leading management role for a number of performing arts companies. Joe previously served as News Editor and has remained a contributing author to InPark Magazine since 2011. HIs writing has also appeared in Sound & Communications, LF Examiner, Jim Hill Media, The Planetarian, Behind the Thrills, and MiceChat His blog, ThemedReality.com takes an unconventional look at the attractions industry. Follow on twitter @ThemesRenewed Joe lives in Sacramento, California with his wife, dog, and a ghost.
Share
Facebook
Twitter
Linkedin
Email
Print
WhatsApp
Pinterest
ReddIt
Tumblr
Previous article
Regional Parks Entice Season Passholders with New Attractions and Events
Next article
Pirates, Treasure & WDI’s Luc Mayrand