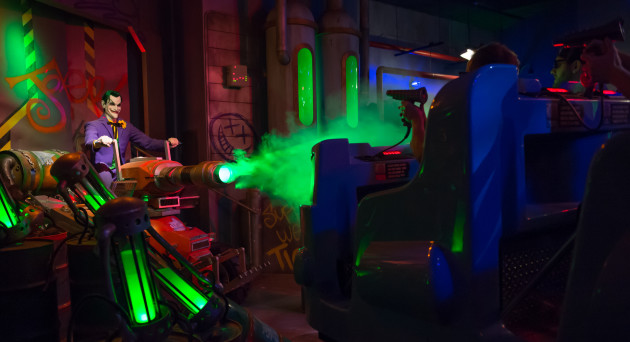 Even superheroes need some time to build a theme park attraction. According to Sally Corporation CEO John Wood, the idea for developing JUSTICE LEAGUE: Battle for Metropolis for Six Flags had been percolating for over a decade.

“We had been talking to Six Flags about using the JUSTICE LEAGUE IP in an attraction for at least ten years, but things really started to move when we approached Six Flags in early 2012,” explains Wood. They talked about the JUSTICE LEAGUE: Alien Invasion 3D attraction Sally was in the process of building at Warner Bros. Movie World in Australia, which opened in September of 2012.

JUSTICE LEAGUE: Alien Invasion 3D is a leisurely paced dark ride that combines a score-based shooting attraction and the JUSTICE LEAGUE theme. Although there is no formal connection between Movie World and the Six Flags parks, Six Flags does have access to the DC Comics IP (which is owned by Time Warner) and park executives knew they wanted an attraction based on the DC Comics characters.

The Australian attraction was an important step forward in the evolution of dark rides. Sally had been installing shooting-gallery style dark rides for many years. Starting in the late 1990s, destination theme parks began adding high-end projection-based media dark rides with motion base vehicles. Alien Invasion was a step towards bringing those concepts and technologies together.

“For the Six Flags ride, we all wanted a new story and ways to integrate the technology to involve visitors more in the show action,” says Wood. “We really felt we were superheroes of the attractions industry, on a mission to bring high-end attractions to life at the smaller parks.”

Six Flags liked what they saw in Australia and saw the potential for more. In 2012, Wood brought in Rich Hill, Creative Director for Sally, to work with Tom Iven, Senior Vice President of U.S. Park Operations, along with Les Hudson and Sam Rhodes, Six Flags Corporate Design, on developing a storyline and concept.

According to Wood, JUSTICE LEAGUE: Battle for Metropolis differs from the Australian version in several significant ways. First, it was important to Six Flags to have a dynamic vehicle that could spin, accelerate quickly, and move in sync with the projected media.

While the park wanted the attraction to appeal to the family market, they also wanted the ride to meet the needs of their thrill seeking population. The second major improvement came courtesy of the Unreal 4 game engine (sourced and integrated by Pure Imagination), which allowed for real-time game play and Alterface Projects’ laser and camera scoring system. This meant that the ride designers could designate anything as a target, and players could rely on the knowing who the “bad guys” are rather than seeking out a specific target shape. Action on the screens reacts to what players shoot at, so the ride becomes much more realistic and intuitive. The powerful game system, coupled with advanced animation and projection systems, elevates the guest experience of this regional park attraction to rival that of a destination park.

Six Flags opted to open two versions of JUSTICE LEAGUE: Battle for Metropolis, one at Six Flags Over Texas (Arlington, TX) and Six Flags St. Louis (St. Louis, MO). Both sites selected were existing buildings that were retrofitted. In Texas, the ride was going into an old theater, with an additional building added on over the reservoir for the park’s rapids ride. In St. Louis, the ride took over space from “Scooby Doo’s Haunted Mansion” boat ride (also a Sally creation), which required filling in the former boat troughs to create a level floor. Both rides contain the same scenes and show elements. The St. Louis version has more space and has more ride track between the scenes.

Developing the ride and storyline

Sally’s Rich Hill gets the superhero’s share of credit for bringing JUSTICE LEAGUE to life. As lead designer on the project he led the ride from concept through installation to opening.

Guests enter the Hall of Justice and learn that several members of the JUSTICE LEAGUE have been captured. They need everyone’s help to find them, free them, and then capture the Joker and Lex Luthor. Guests move on to Cyborg’s lab where they learn about the ride vehicles being provided and the technology riders will use to stun villains and free the heroes.

Guests then grab 3D glasses and enter the six-passenger ride vehicle. According to Hill, the ride was always designed with 3D media in mind. “We wanted the characters and scenes to pop out at guests, and the best way to do that is with 3D,” explains Hill. The team selected RealD for the 3D projection system.

Sometimes it is simple technology that can have a big impact. Hill pointed out that the doors dividing scenes are new sliding doors created by Besam and manufactured by Door Control Inc. A traditional dark ride door swings open, which takes a longer time than a sliding door and uses a lot more real estate. Ride vehicles have to travel forward past the door arc so the doors can close. With sliding doors, the vehicle can turn directions much sooner, freeing up the layout significantly. Hill says he got the idea on a visit to the local grocery store, and has been really pleased with how they have blocked light and sound between the different scenes.

The ride layout takes vehicles through a series of fabricated sets and CG environments. “We worked hard to mix the practical with the virtual,” says Hill. “Tangible effects make a difference. And for the CG portions, we took a lot of care to make it look like virtual vistas, as opposed to just sitting in front of a TV screen.”

During the trip through Metropolis players can shoot at targets both on the screens and in the real environment. The second half of the ride takes place in a series of immersive curved screens designed to cover players’ field of sight. At the end, scores are calculated and displayed, along with a photo of each
player taken earlier in the ride.

A new vehicle for fun

The six-passenger vehicles for the attraction are Oceaneering’s Evo-6™ product. The JUSTICE LEAGUE attractions were the first installation of the Evo-6 ™, which is derived from an 8-passenger vehicle called Evolution, first debuted in 2005.

Each vehicle has a full motion base capable of 360-degree spins (yaw). The vehicle also contains onboard lighting and audio. Onboard audio playback comes from an Alcorn McBride AM4 Digital Audio Machine. Audio amplification comes from Alcorn’s AmpTraXX amplifier. Both of these units are mounted together using a special bracket that Alcorn designed to save space in the ride vehicle. For both Six Flags attractions, the vehicles also contain a strobe light used sparingly throughout the ride.

The maximum speed for the vehicles is six feet per second, although they rarely go that fast. Oceaneering’s Nathan Marks, project manager for the Evo-6™ vehicles says the gaming element requires slower movement. “When players are aiming at targets, we don’t want to spin them around or move them too quickly along,” explains Marks. “In St. Louis, we had more space between scenes so we are able to take the vehicle up to full speed several times during breaks in the game.” 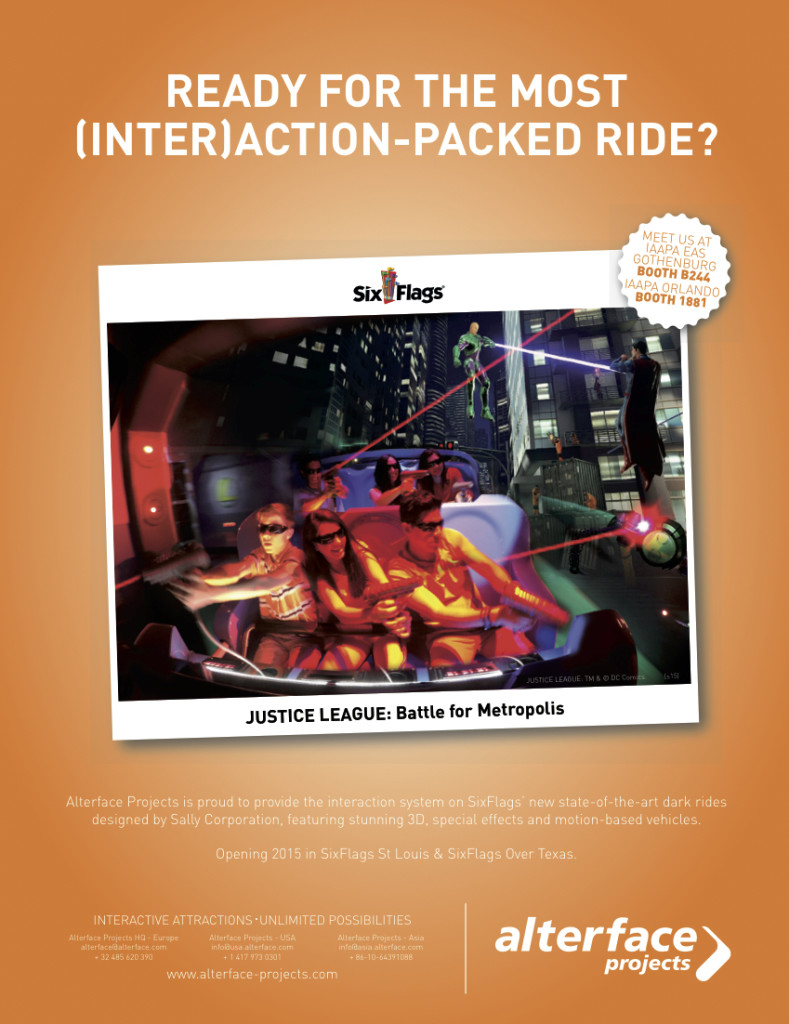 The gaming system is a core element of the attraction. Alterface Projects developed the patented interaction system, which is based on laser and camera detection technology. According to Alterface Projects CEO, Benoit Cornet, “This system avoids putting fragile components into the interactive devices, which means simpler and cost-effective maintenance.”

Each vehicle wirelessly transmits scoring data to a central computer located backstage. This isolates the sensitive equipment from the vibrations and movement of the ride vehicle, enhancing reliability.

The gaming system is noticeably different from the Australian attraction. “The system is largely invisible to the guest,” says Benoit. “The camera and laser system allows virtually anything to become a target.”

In the case of JUSTICE LEAGUE the team took the technology one step further and created moving targets on a fog screen. When Alterface and Sally were working on the Australian ride, they ended up with an extra projector and during the install they used it to try and project 3D onto the fog screen in that attraction. When it worked, one of the Alterface crew set up the gaming system by the fog screen to see if it would read the scoring. It proved to be effective, but it was only temporary. As Rich Hill likes to say: “It was a little secret we kept in our back pocket until the Six Flags projects happened.”

Now, guests round a corner and see a fog screen in front of them with an army of Lex-Bots (small menacing robots sent to protect the villains) appearing to move toward the vehicle. As players shoot at the fog screen the Lex-Bots respond. As the vehicle breaks through the fog screen riders suddenly find themselves in an entirely new scene. The moment is startling and powerful; an effective deployment of existing technologies in an entirely new format. That, in essence, is what makes JUSTICE LEAGUE a success.

With such a dynamic ride environment, the show control systems might be complicated. Not so, says Sally’s Technical Director John Stegall. “Three main systems are able to operate the whole attraction,” says Stegall. Sally utilizes four Weigl show controllers that run all of the show elements, including the preshow and load area monitors.

Both attractions have received impressive reviews from fans in St. Louis and Texas. And according to John Wood, it’s only the beginning of a dark ride renaissance.

“There are a lot of things contributing to the resurgence of dark rides today,” says Wood. “Technology is one of those things, but it’s also time. There is an increase in demand worldwide that wasn’t there in past
decades.”

Six Flags CEO Jim Reid-Anderson seems to agree. At the IAAPA Asian Attractions Expo Leadership Breakfast, when asked about the success of the attraction, he hinted that more are in the pipeline: “[Interactive dark rides] are probably a fundamental part of our plan going forward.”
• • •