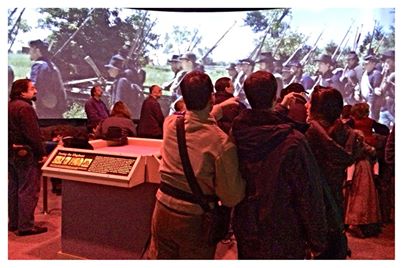 Cyclorama:  a panoramic painting on the inside of a cylindrical platform, designed to provide a viewer standing in the middle of the cylinder with a 360° view of the painting. The intended effect is to make a viewer, surrounded by the panoramic image, feel as if they were standing in the midst of an historic event or famous place.

When the Kenosha Civil War Museum was in development, Museum Director Dan Joyce knew he wanted to create an experience to help visitors understand what it was like to be a soldier during the Civil War by immersing them in the environment of the battlefield.

Development for the museum began in 2005, with the doors first opening in 2008. Although a cinema experience was part of the vision and the facility design, its realization was put on hold until the next phase.

According to Curator Doug Dammann, Joyce was inspired by the old cyclorama paintings, and wanted to create a “living, breathing cyclorama.”

A round theater was constructed but the original exhibit consisted of a laser map presentation that broke down by state and year the battles in which Midwestern troops fought. Beneath the presentation, exhibit cases showcased period artifacts. 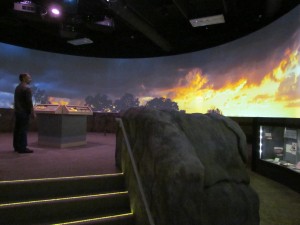 The Museum decided to upgrade to a 360-degree cinematic experience, and issued an RFP in February 2013. After selecting Boston Productions Inc. (BPI), the team assembled in March of 2013 to begin developing the script and treatment. Filming took place in June, with post-production starting immediately until the new film opened in January 2014, less than a year after starting the process.

“We chose BPI because of their experience with living history actors,” explained Dammann. “BPI also was very detailed in explaining how the film would be produced, installed and maintained.”

Initially the museum had imagined a three-minute film. BPI suggested including characters throughout the story to add empathy and a personal touch. And so, the film introduces guests to three soldiers who each explain what they believed battle would be like, their experience during a battle, and the aftermath. The finished film is 11 minutes long, about the maximum length for a standing theater.

Authenticity was integral to the production. All the character dialog was based on information that the museum found in letters, diaries or memoirs written by Civil War soldiers. The film’s battle sequence was based on the Iron Brigade’s first battle in Gainsville on August 28th,1862. The film is titled Seeing the Elephant and references a phrase commonly used among soldiers who had experienced battle for the first time.

Because the museum had planned for a circle film since its inception, most of the infrastructure was already in place. The raised platform was designed with access and power to be able to add equipment beneath. During the film installation process, an small lift was added to the platform to increase accessibility.

Additionally, the power needed for the projectors had already been installed above the platform, requiring very little additional construction work. 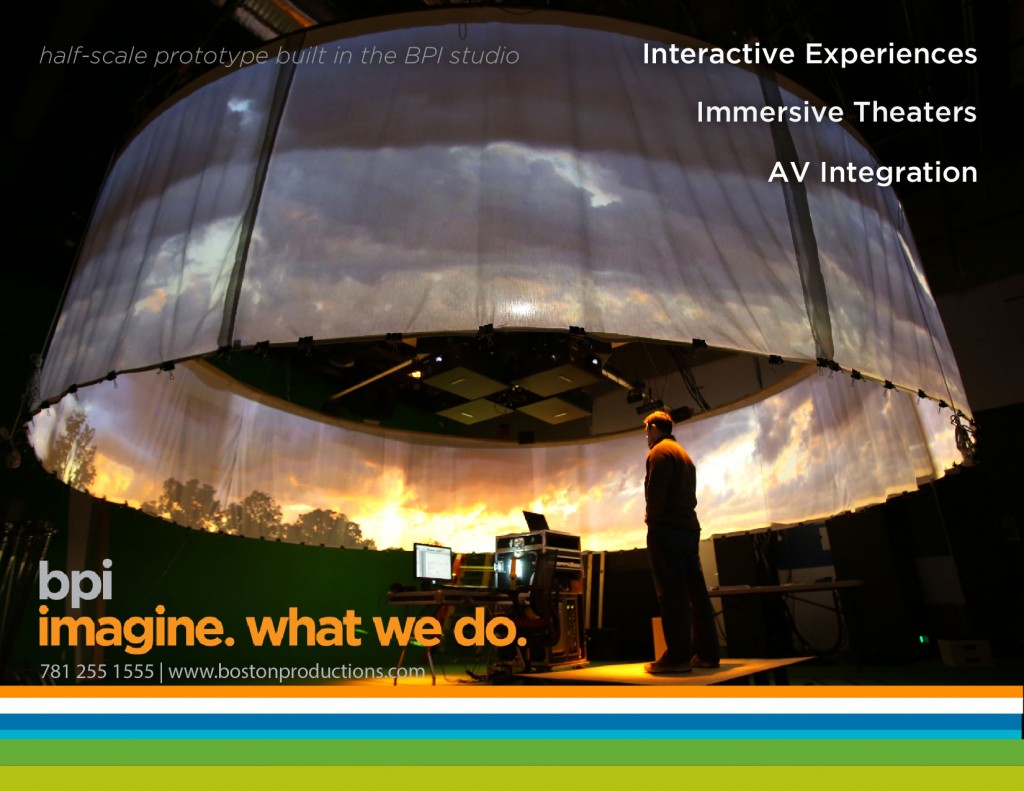 The 11-foot high walls of the 45-foot diameter room were painted with four coats of Screen Goo to create a seamless projection surface. The theater can accomodate about 75 adults standing.

To achieve the 360-degree film, eight Digital Projection Inc. HIGHlite Cine660 projectors are hung off a rig over the center of the platform. Each projector displays a 1920X1080 Mpeg-2 image on the screen, with edge blending to create the seamless image.

Naturally, a curved space creates a lot of echoes. The team discovered that by pointing the speakers down and in, the echoes are greatly reduced. They also installed acoustic ceiling tiles and foam above the screens to help deaden the sound.

From an artistic point, the 360-degree design presents a unique challenge in telling a story to guests, who may have their attention drawn to any of the images surrounding them. Dammann likes to say that the circular speaker array helps guests to “let their ears guide their eyes.” As sound moves to the speaker above the area the director wants to feature, guests naturally focus in that direction.

BPI wanted the experience to be immersive, but to not overwhelm guests with special effects. BPI’s Chief Creative Officer Bob Noll asked, “What can we use to enhance what is happening on the screen?” Noll and VP of AV Integration/Sr Systems Designer Chet Kaplan looked for ways to build upon the mood of the film.

Five colored LED light fixtures above the platform are enhanced with a campfire lighting effect, strobe lights during the battle scene, and an air cannon conceived by BPI and built by 5Wits Productions blasts guests with air as cannonballs whiz by on the screen.

The control room for the show is housed on a different floor in the museum. EAW DX1208 DSP’s are used for sound processing and matrix mixing of the audio signals and five QSC CX-302 amplifiers send audio to the various speakers.

An AMX system was used for all aspects of show control which includes overall daily power schedule, and providing different modes of operation via a Modero NXD-700i touch panel. Additional show elements are controlled by two Dataton Watchout systems which control all lighting cues and effects. The show is set to run automatically every hour, although museum staff can run the show on demand as needed.

The $1.3 million project has already shown results for the museum.

“We are on pace to exceed our annual attendance figure of 75,000 visitors,” said Dammann. “And most of that is due to this 360-degree film experience. It truly is a cyclorama brought to life.” • • •