“We need to do a better job communicating to the public our mission of conservation and saving animals from extinction,” said Jim Maddy, president and CEO of the Association of Zoos & Aquariums (AZA) at the 90th annual AZA conference in Orlando. He was introducing a new coordinated conservation effort uniting stakeholders with the common goal of saving species from extinction.

Zoos and aquariums today are re-examining both method and message. As wild creatures and wild places become scarcer and the world grapples with the attendant issues, zoos and aquariums are actively stepping up their positioning as leaders in conservation. At the same time, there are new design approaches, technologies and media being incorporated to enhance and intensify the guest experience as well as that of the animals, often intertwining the two in unique ways.

The recession and staycation trends have supported attendance at local zoos in the same way as at regional amusement parks and museums. In his opening address, Maddy pointed out that no AZA members had been forced to close during the recession and that employment is up in the sector. He also stressed the importance of positive experiences in staying close to the hearts and minds of the public: “You are trusted by guests and by the general public.”

“We are the real activists; we are the real animal advocates. Stand proud and stay the course,” said Bill Wolden, outgoing president of IMATA and Director of Training and Development at Dolphin Quest. IMATA, an international organization, represents 1,800 trainers, researchers, educators and vets.

In a brief opening statement, Brad Andrews of SeaWorld, referred to a “tough year,” adding, “rough is good for you.” 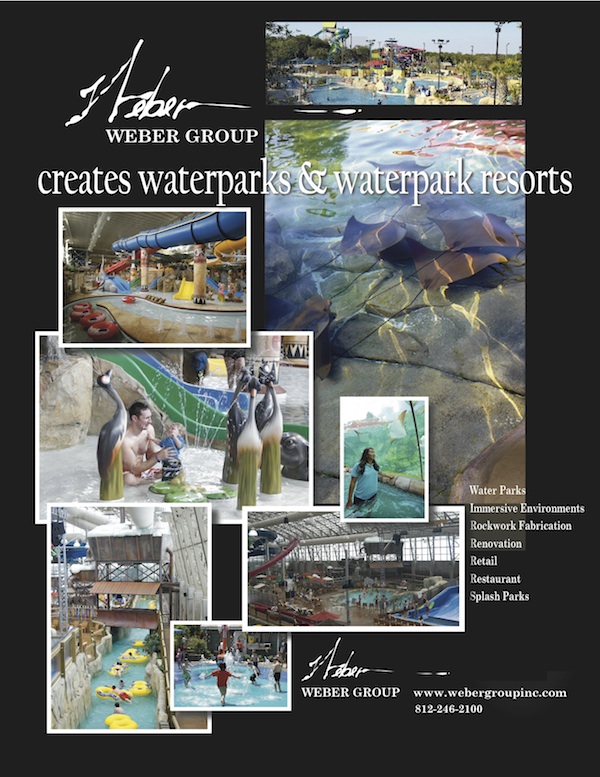 Keynote speaker Cristián Samper, president and CEO of the Wildlife Conservation Society, overseeing what is said to be the world’s largest collection of urban parks including the Bronx Zoo and New York Aquarium, shared sobering figures about human population growth, development, extinction and the loss of natural resources. Samper pointed out that the 50% of the world’s 7 billion humans who live in cities are likely to experience nature only through zoos and aquariums, calling on conservationists to work with city planners and the agriculture sector, and to connect field conservation with the work of zoos and aquariums. According to Samper, zoos and aquariums are investing $160 million per year in conservation, “more than any government entity.” Citing 2,978 conservation projects in 127 countries, about half of those in North America, he indicated a need for rebalancing – that the projects emphasize mammals and birds when in fact turtles, primates and amphibians are the more endangered species.

Samper described the 96 Elephants project – a campaign that includes over 100 AZA-accredited zoos and aquariums, working to shut down the ivory markets and call attention to escalated poaching that is devastating the African Elephant population. He called on all AZA members to join the effort and to spread awareness stemming other, unsustainable rates of loss in animal populations.

Numerous conference sessions addressed these issues in more detail, including “The Elephant Poaching Crisis: How Action Can Turn the Tide,” “Join the Fight to Keep Giraffes in Africa,” “Conservation in our Backyards,” “Partnerships to Enhance Conservation Impact,” “Collaborative Zoo and Aquarium Regional Conservation,” and others.

But while the AZA and IMATA communities fervently pursue their mission of conservation – and that mission has never been more urgent – they face considerable public relations obstacles. As Brad Andrews said, it’s been a tough year. In the panel discussion “Public Opinion Shapes Your Story,” Jill Allread, president of Public Communications Inc. exhorted the community to be more pro-active and take action quickly to reframe the debate. She pointed to the influence of the controversial documentary Blackfish and activist websites such as thedodo.com, and Millennials’ reliance on social media for their information. “You must address the issues,” she said, recommending the use of “simple, compelling messages,” “technology that connects,” and “making it personal.” As an example to illustrate her point, she described the turnaround in public sentiment that was helped by a refocusing in the same-sex marriage controversy. Harping on equality was replaced by an emphasis on love, family and children. Zoos and aquariums can and must, Allread said, “enter the discussion and own it. You have a better story.”  • • •

Sessions about new and upcoming projects, and conversations on the AZA trade show floor, revealed a wide range of intriguing design approaches. Here are some highlights.

Joe Rohde of Walt Disney Imagineering showed concept art for the Avatar land (4) set to open in 2016 at Disney’s Animal Kingdom, the park for which he was a primary creative force. Noting that “a lot of Disney stories revolve around the relationship of humans to animals,” Rohde shared Director James Cameron’s intention that Avatar be a cautionary tale regarding conservation, a “broad and vivid metaphor to push to the real work and actual planet we have: Earth.” The new Avatar land will not have any live animal exhibits.

Pacific Visions, the new wing of the Aquarium of the Pacific, is devoted to animals that are too big to keep in an aquarium, or too small to see with the human eye. In her design presentation, Ursula Currie of EHDD Architecture described a high-tech, media-rich approach in a similar vein to BBC and Sega’s Orbi in Yokohama, Japan. The primary attraction of Pacific Visions, opening in 2017, will be a 320-seat, 4D, immersive, multi-purpose theater with a 30-foot high screen and 180-degree field of view. The building’s biomorphic shape suggests a whale, and its non-translucent glass façade will be projection-mapped.

Mark Reed, executive director of the Sedgwick County Zoo in Wichita, Kansas, presented Elephants of the Zambezi River Valley (1). Opening in 2016, the $10.6 million, 7 acre exhibition includes an 18,000 square foot elephant barn with six stalls (to house the Zoo’s current pair, Cinda and Stephanie, and add four more). It is being touted as the third-largest elephant exhibit in the US and will have the further novelty of boat rides that put visitors in the same water as the elephants. Design is by Wichita’s GLMV Zoos. 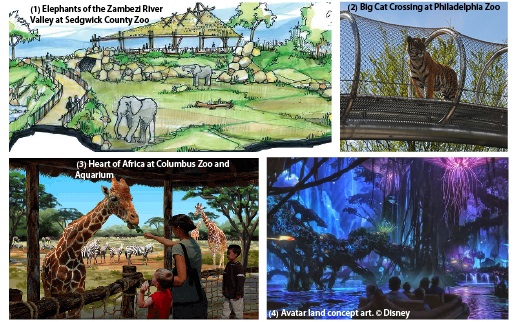 On the exhibit floor, Janine Baker of nWave Pictures talked about 4K having emerged as the new standard of digital video. “You’ve got to have it,” she said. “It’s a must for any producer or distributor, and the consumer demands it.” Whether one is presenting current or vintage material, she said, “Everything needs to look new and ‘wow’ all the time no matter what it is.” nWave’s recent wildlife titles include African Safari 3D, Great Apes 3D, Galapagos 3D: Nature’s Wonderland and Penguins 3D.

Kate Magnusson of SimEx-Iwerks reports that Frozen Planet, the company’s new attraction film in partnership with BBC, is playing at the Cincinnati Zoo and Botanical Garden and opens in February at the Vancouver Aquarium Marine Science Center. Rio 4D premiered about a year ago at the San Diego Zoo and will soon open at other locations. SpongeBob SquarePants 4D: The Great Jelly Rescue, is going strong at theaters around the world. And it’s the 10th anniversary of Polar Express, which Magnusson reports has become an established family tradition, at some theaters running from November 1 through early January to meet popular demand.

Penny Peavler of The Weber Group Inc., a design, construction and specialty fabrication company based in Sellersburg, Indiana, was very busy with clients at her AZA booth. She talked about recent work in collaboration with Thinq Design on the International Orangutan Center for the Indianapolis Zoo. Weber Group’s many projects in the zoo sector include the National Aviary in Pittsburgh,  the Louisville Zoo (Glacier Run), the Sedgwick County Zoo (1) (above-mentioned elephant exhibit) and the Indianapolis Children’s Museum (National Geographic Treasures of Earth). Weber Group emphasizes what Peavler calls “true design/build” or “integrated project delivery.” The company is also a key member of the creative team directed by George Wade for the new Crayola Experience (slated to open in 2015 in Orlando), with Callison Global.

Melissa Ruminot and Stephen Dodson of The Nassal Company, a fabricator and producer based in Orlando and well-known in the themed entertainment sector, talked about the firm’s substantial zoo portfolio. Among zoos, Nassal is especially in demand for its rock work. Projects include Houston Zoo (African Gorilla exhibits), Columbus Zoo and Aquarium (3) (Heart of Africa), Zoo Miami (upcoming Everglades exhibit) and Antarctica: Empire of the Penguin at SeaWorld Orlando, which recently won an Eagle Award from the Association of Builders and Contractors, citing excellence in rockwork in Central Florida. Ruminot’s remarks attest to Nassal’s attention to detail and authenticity, as well as a sense of responsibility – an understanding that they are not just creating rock work or an aesthetically pleasing exhibit, but a home for specific creatures with specific needs. “The animal is the end user,” she said.

Other projects presented in the exhibit design sessions at AZA:

• Jacksonville Zoo and Gardens’ new Land of the Tiger

• Antarctica: Empire of the Penguin at SeaWorld Orlando

• Meerkat Hamlet at the Brevard Zoo

Judith Rubin
Judith Rubin ([email protected]) is a leading journalist, publicist, strategist, blogger, content marketing specialist and connector in the international attractions industry. She excels at writing about all aspects of design and technical design, production and project management. Areas of special interest include AV integration and show control, lighting design and acoustics, specialty cinema, digital video and world’s fairs. Judith has ties to numerous industry organizations. From 2005-2020 she ran communications, publications and social media for the Themed Entertainment Association (TEA). In 2013, she was honored with the TEA Service Award. She was development director of IMERSA, and co-chair of the 2014 IMERSA Summit. She was publicist for the Large Format Cinema Association in the 1990s, now part of the Giant Screen Cinema Association (GSCA) and has also contributed to the publications of PLASA, IAAPA and the International Planetarium Society. Already making her mark as a magazine and book editor, Judith joined World’s Fair magazine in 1987, which introduced her to the attractions industry. Launching as a freelancer in the mid 1990s she has contributed to dozens of publications and media outlets including Funworld, Lighting&Sound America, Sound & Communications, Urban Land, The Raconteur and The Planetarian. She joined InPark in 2010. Judith earned a Bachelor of Fine Arts from Pratt Institute. She has lived in New York City and the San Francisco Bay Area, and now makes her home in Saint Louis, where she is active in the local arts and theater community.
Share
Facebook
Twitter
Linkedin
Email
Print
WhatsApp
Pinterest
ReddIt
Tumblr
Previous articleOpening a New Chapter at WhiteWater
Next articleHolovis to Showcase “The Lost Cove,” Newest Interactive DomeRider Experience, at IAAPA Attractions Expo