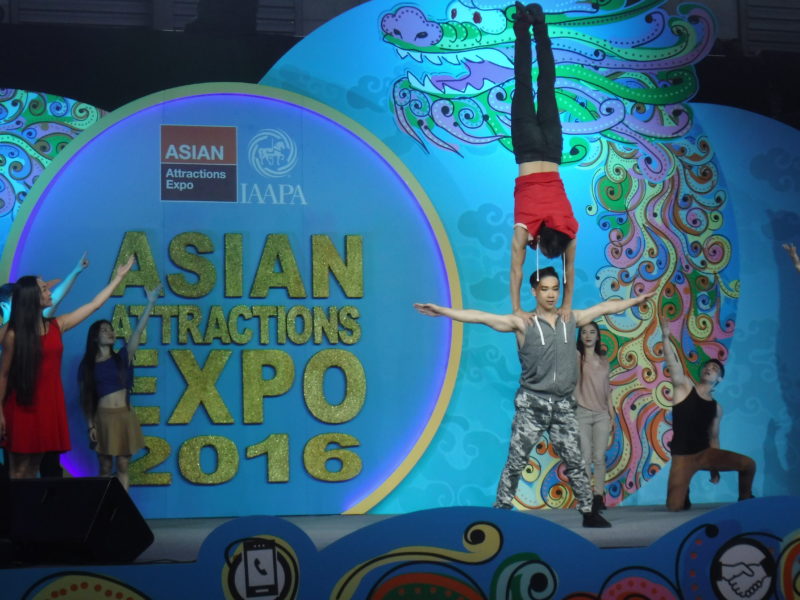 On the 14th of June, IAAPA CEO Paul Noland opened the 2016 Asian Attractions Expo with a moment of silence for the victims of the Orlando shooting that had happened a day prior. It was a somber and appropriate tribute – a necessary time of quiet in an event otherwise bustling with noise and activity.

InPark Editor Martin Palicki was on hand for the expo, including the opening ceremonies, trade show, education sessions and special events.

Many industry pros are saying Dubai Parks & Resorts’ Bollywood park will be the unexpected hit when it opens as part of the larger multi-park resort (scheduled to open in October 2016). Attractions, themed to Bollywood film IP, include multiple media-based rides, and highly themed shows (InPark’s Judith Rubin previewed Bollywood’s new stunt show and highlighted the park’s promising future in Issue #62, 2016).

Holovis is providing an immersive tunnel attraction based on a car chase scene and helicopter ride around Dubai. Matt Dobbs, Holovis’ Project Manager, reports the ride will have two independent systems, each holding 30 people with back-to-back 3 DOF motion platforms. The film will be projected on a 6.2m tall curved screen.

Triotech is installing one of their IDR (Interactive Dark Ride) attractions at the park. The dark ride experience is themed to the “Sholay” Bollywood film IP.

Additionally, Wärtsilä FUNA is doing AV, projection and show control for over 80 venues at the Bollywood and Motiongate projects, as well as working with ITEC on show supervision for six attractions between the two parks.

According to ProSlide’s Chelsea Ogilvie, the trend in waterpark attractions is mega-capacity. Driven largely by Asian waterparks that serve extremely large markets, slides need to accommodate a higher throughput.  One solution ProSlide has available is using six-person rafts on slides previously using four-person rafts. Although not available for every attraction, most slides can accommodate the larger rafts without any engineering adjustments.

WhiteWater was promoting its LatiTube and WaveOz, both providing wave riding options, the former offering a kid-friendly honeycomb surface with nozzles that direct the water in an adjustable wave format while the latter can create up to 180-degrees of surfing for those looking for a tougher challenge.

During the Expo, WhiteWater offered a free seminar on the company’s line of Wave products and how they integrate within the larger park structure. According to WhiteWater’s Una DeBoer, “Sharing our expertise in waterparks is a way for us to provide extra value to customers.”

Polin showed off their Aquatube and Space Hole slides recently installed on the world’s largest cruise ship, Royal Caribbean’s “Harmony of the Seas.” As a side note, since AAE, Polin has reported that their team is thankfully safe following the recent unrest in Turkey. 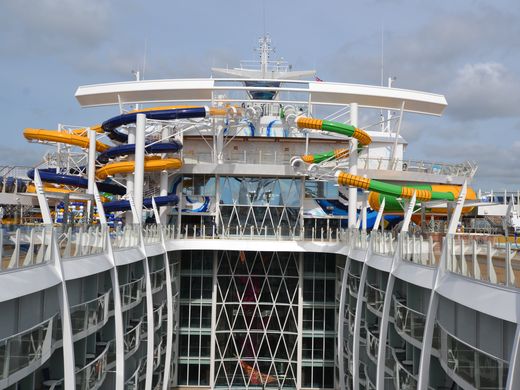 Many vendors brought a variety of VR experiences to the show floor with VR goggles dispatched to riding, reclining, siting and standing experiences. Watching attendees attempt to navigate virtual worlds highlighted that we are just at the beginning of learning how to best integrate, design for and use the technology. At best, many participants looked awkward, and those able to move around seemed to have to be re-oriented back into their designated virtual spaces with regularity.

“There are operational issues and costs for VR that will get better but people are also talking about the group experience,” said Triotech’s Christian Martin. “Not being able to see the people you are with [in a VR experience] is like going to a restaurant together but sitting at different tables.”

“The theme park is a form of media where you have to move through space,” explains Reid.  “In that environment, technology like Google glass or AR would function better.”

Despite critiques, VR is already enjoying a certain level of success at theme parks around the world, and the quantity of vendors committed to enhancing the product likely indicates that the tech will continue to proliferate in the market. 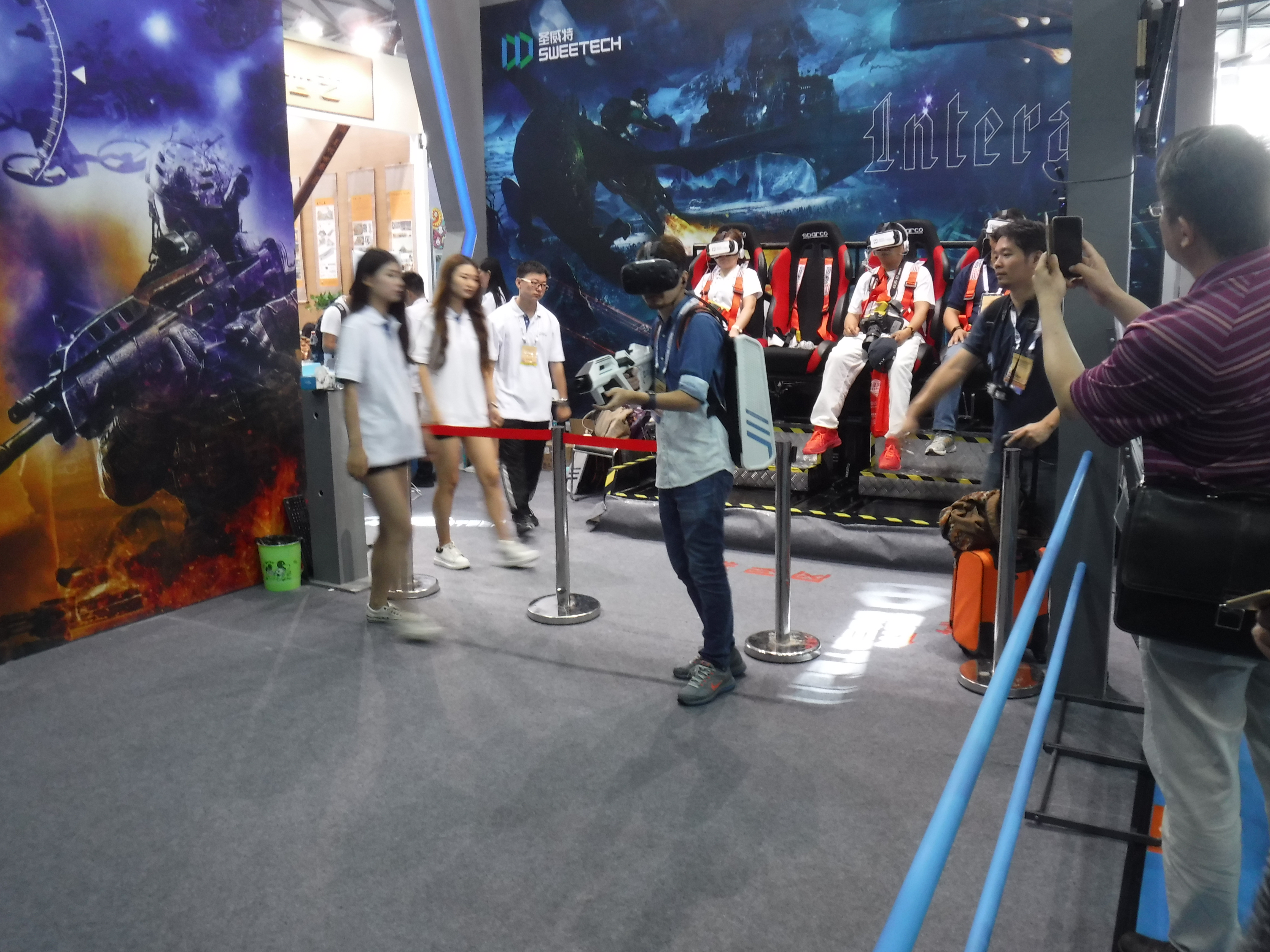 Falcon’s Creative Group, Kraftwerk and CAVU announced a new partnership in developing the Circumotion attraction. The team was introducing the concept at AAE 2016 but the first one is currently being built in Dubai. The base-model ride situates 134 passengers in concentric circles on a round motion platform under a dome outfitted with Christie projectors.  The 40-ton ride offers 3 DOF plus heave, and Falcon’s CEO Cecil Magpuri calls it “nimble and elegant.”

Magpuri says the team will use cinematic techniques and multiple storytelling viewpoints to create narratives that all guests, facing different directions in the dome, will be able to follow. “Each seat has roughly a 270-degree view,” says Magpuri, “meaning 80-90% of the experience is available to riders at any given moment.”

Magpuri also pointed out that the system’s software is able to extract the x-y-z positioning data from the film and automatically import it into the ride vehicle. Then the artist / programmer can go in and enhance the motion. The technology saves time and reduces rider sickness as the ride is already synched to the film.

According to Magpuri, the partnership was driven by customers wanting turnkey solutions. Smaller parks often don’t have a way to manage vendors, and the partnership reduces the risk involved in that process. 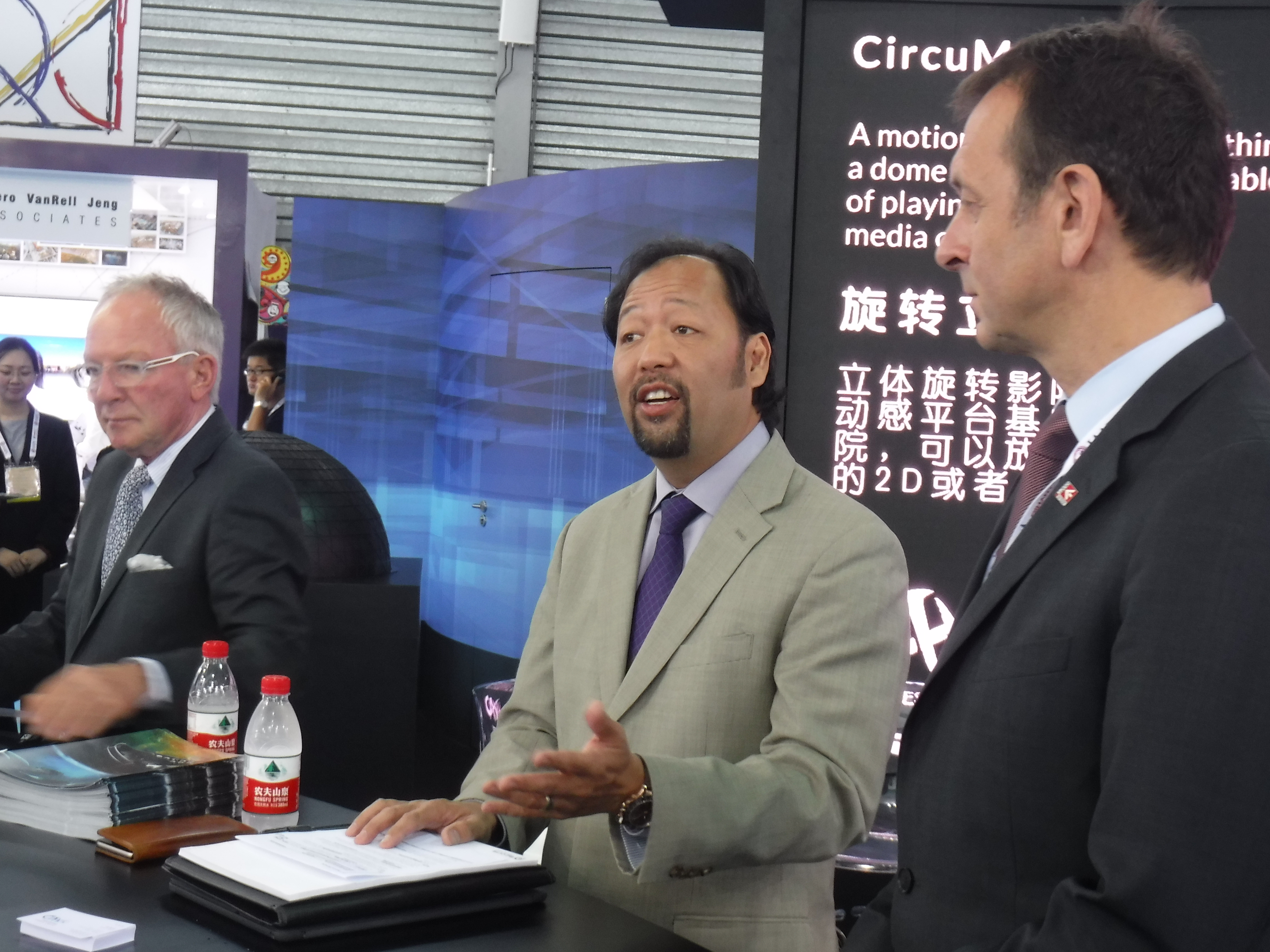 Design firm Rhetroactive and technology provider Holovis are partnering on a series of projects for Discovery Communications and are marketing their collaboration to other potential developers.

“There are two approaches when designing a large project. You can pick attractions that will appeal to a certain audience or you can take our approach: We ask what is the story the client is trying to tell and what is the desired end result. Then we go and select the best ride systems available to fit that goal,” explains Rhetroactive’s Steve Trowbridge.

“We are not competing against master planners,” cautions Holovis’ Stuart Hetherington. “We are combining planning and guest experience (Rhetroactive) and the tech and media and innovation (Holovis). This allows us to focus on providing the latest technology.”

The partnership has been developing for some time. The two companies have worked together on various projects and started discussing bringing skills together.

Trowbridge notes that the industry has evolved to a point that with Disney and Universal now firmly established in China and Japan other studios are shifting their focus to the Asia Pacific marketplace. “We as consultants are able to streamline the process for these studios,” says Trowbridge. “There is a tremendous opportunity to help these parks reach that quality and the best way to do that is to partner with other providers.”

Rhetroactive and Holovis are also working with vendors like JBA Artistic Engineering to provide infrastructure and engineering expertise to projects. 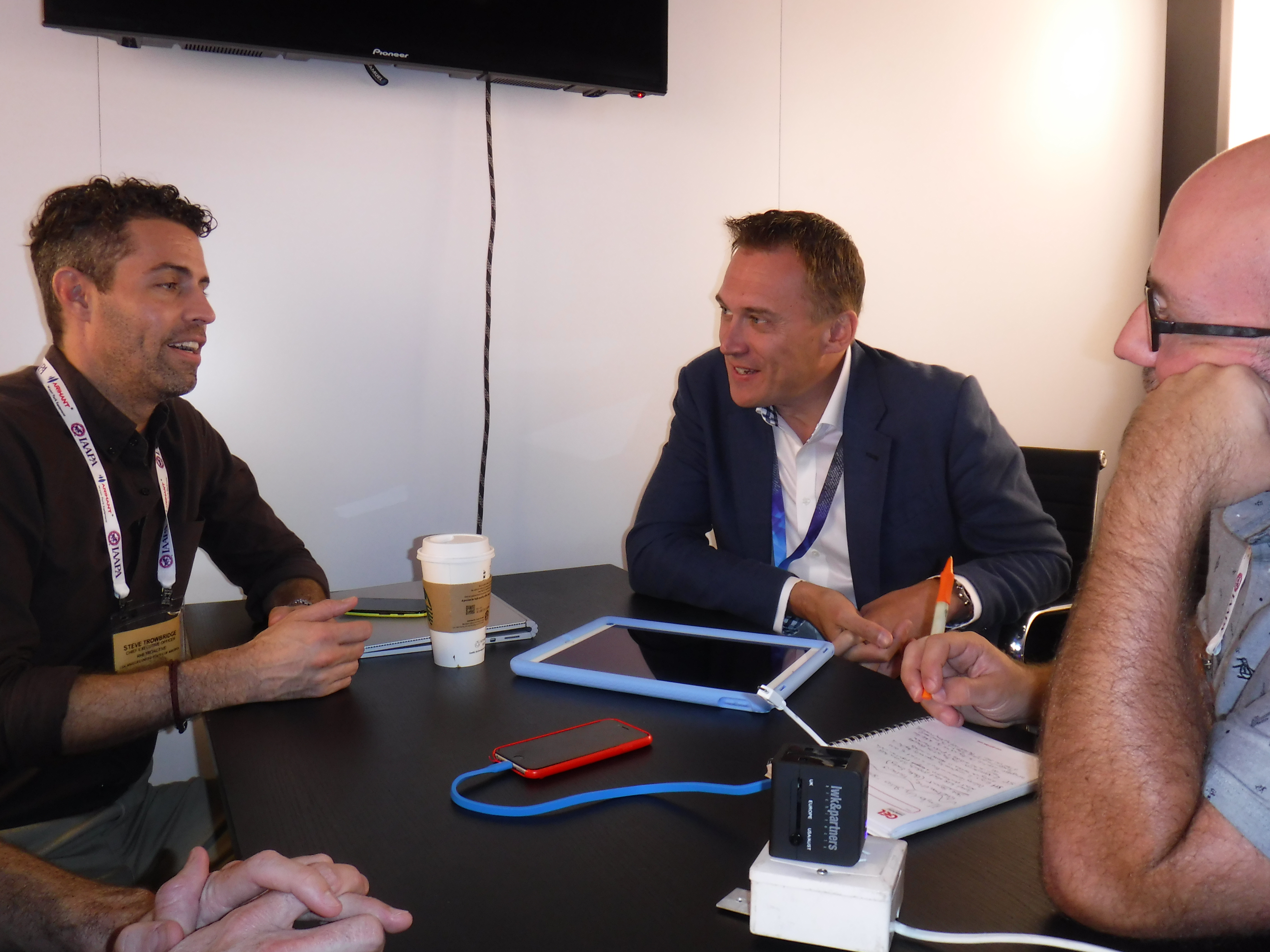 Attraktion! is continuing its partnership with Intamin on their Dome Ride product launched at AAE in 2014. Two Dome Rides have been sold in China and is now in the master planning stages for more than 20 parks globally. The attraction requires a custom building so Attraktion! CEO Markus Beyr says Dome Ride is “ideal for new parks.”

The partnerships, of course, don’t mean companies are not available for individual work, or partnerships with others too. Holovis, for example, is also partnering with Dynamic Attractions on their media and effect-laden roller coaster currently being installed at Ferrari World Abu Dhabi. • • •

Joe Kleimanhttp://wwww.themedreality.com
Raised in San Diego on theme parks, zoos, and IMAX films, InPark's Senior Correspondent Joe Kleiman would expand his childhood loves into two decades as a projectionist and theater director within the giant screen industry. In addition to his work in commercial and museum operations, Joe has volunteered his time to animal husbandry at leading facilities in California and Texas and has played a leading management role for a number of performing arts companies. Joe previously served as News Editor and has remained a contributing author to InPark Magazine since 2011. HIs writing has also appeared in Sound & Communications, LF Examiner, Jim Hill Media, The Planetarian, Behind the Thrills, and MiceChat His blog, ThemedReality.com takes an unconventional look at the attractions industry. Follow on twitter @ThemesRenewed Joe lives in Sacramento, California with his wife, dog, and a ghost.
Share
Facebook
Twitter
Linkedin
Email
Print
WhatsApp
Pinterest
ReddIt
Tumblr
Previous articleInfrared Inspires the New Interactivity – Gantom
Next articleProjecting Light – Christie