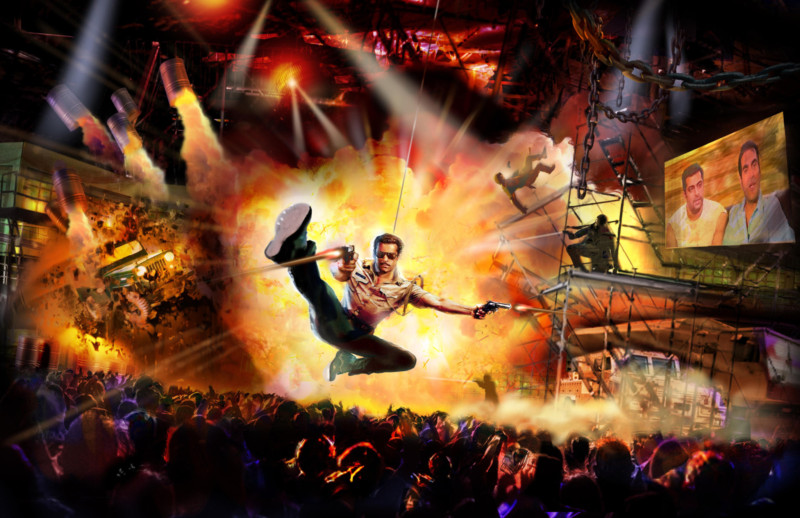 India has been referred to as the sleeping giant of entertainment development, a market with the potential to one day outpace the current explosive growth of destination attractions in China. While there have been some inroads, a large-scale manifestation is still some years off.

Meanwhile, India’s entertainment export, Bollywood cinema, has a long standing and widespread appeal that goes far beyond its native country. Bollywood is the foundation of an entire theme park: Bollywood Parks™ Dubai, part of Dubai Parks and Resorts, the region’s largest integrated theme park destination opening in October this year.

Is Bollywood the emerging IP giant of theme park attractions?

The 2.1 million square foot Bollywood Parks™ Dubai includes five themed zones and 16 rides and attractions “dedicated to all things Bollywood.” And there’s reason to think that once it opens, more designers, operators and developers will begin to recognize the power of Bollywood intellectual property (IP) and adopt it. That’s certainly the opinion of Bob Chambers and Edward Marks, co-CEOs of The Producers Group (TPG), an international production company providing show production and equipment for an elaborate, high-tech, live stunt show based on the Bollywood hit action film franchise Dabangg (pictured at top), for Bollywood Parks™ Dubai.

In the news about Dubai Parks and Resorts, most of the attention has gone to motiongate™ Dubai, which will showcase Hollywood characters from DreamWorks Animation, Sony Pictures Studios and Lionsgate and two LEGOLAND parks.

And yet, Dubai is full of billboards featuring Dabangg star Salman Khan. He’s a celebrity in the UAE, where people are crazy about Bollywood movies and grew up watching them. “They know Shrek, they know Madagascar – but those aren’t the celebrities with an emotional connection for them,” says Chambers.

Chambers and Marks believe Bollywood Parks™ Dubai is going to be the sleeper hit of the Dubai Parks and Resorts complex, and that many others will soon be eager to acquaint themselves with and license lucrative Bollywood properties for new guest experiences. Over the past 20 or so years, they’ve worked on many IP-based attractions around the world, and their clients include top theme park operators.

In addition to providing technical design, engineering and project management, The Producers Group offers consulting services to designers and IP owners looking to make the most of a property. Through the experience of working on the Dabangg stunt show and spending a great deal of time in Dubai, they’ve developed a keen sense of how beloved Bollywood is in the region.

“We’ve both been impressed by the depth of familiarity and interest we have encountered, and how excited the Middle Eastern community is about this park. Locals refer to ‘the Bollywood park,’ to indicate the entire complex,” says Marks. “Bollywood is what identifies and differentiates it for them. Bollywood is what touches them.”

Why is Bollywood so popular in the UAE? “In terms of social values, Bollywood culture is very compatible to Middle East culture, especially those following Sharia law,” says Marks. “It’s great storytelling that entertains while conforming to certain values. It’s colorful and musical, with plenty of excitement, romance and action. The stories trace classic themes with traditional male/female roles, dress and behavior. Many people in the Middle East have been watching Bollywood movies since childhood, with the approval of their parents. Maybe there’s just a little bit more sauciness in the newer movies. That’s a good fit with Dubai.”

Marks and Chambers aren’t the only ones to notice the penchant for Bollywood outside India. An article in the March 11, 2014 edition of The National, a UAE news outlet, is titled “Bollywood craze grows ever stronger with audiences in Middle East.” Reporter Preeti Kannan cites the audience appeal of well-acted movies that blend comedy, action and romance, and the cultural similarities. “The rising number of viewers in the Middle East and North Africa has prompted television stations in the UAE and across the region to dub popular soaps and films into Arabic,” writes Kannan, noting that the Pan Arab conglomerate MBC Group recently launched MBC Bollywood to serve this interest.

There’s reason to expect to see Bollywood IP applied to attractions in China as well. The Asia Times June 2, 2015 story by Dr. Sudha Ramachandran, “Budding romance: Bollywood in China,” reports on the growing popularity of Bollywood films in China and collaboration between the Indian and Chinese film industries. Dr. Ramachandran points out that it is local Chinese who are watching the Bollywood movies and that “Bollywood films have a massive following in South Asia, Central Asia, the Gulf and Africa… Audiences enjoy its song and dance routines and connect easily with its family and community oriented themes.” 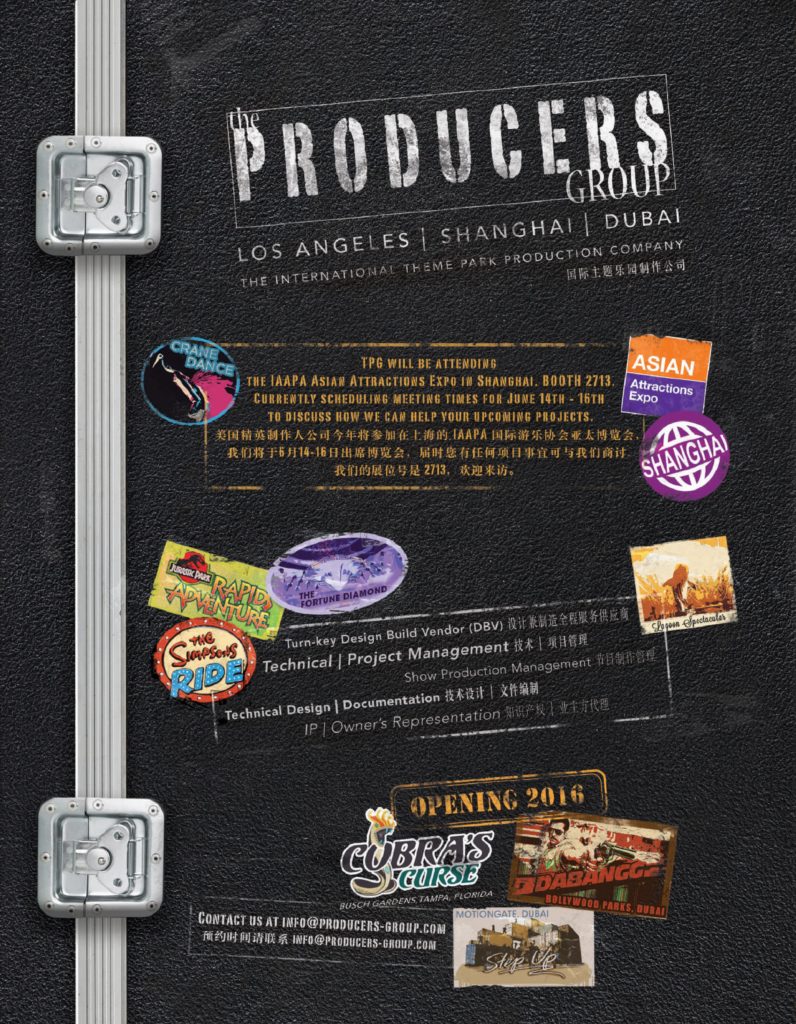 But even regions that are not, as a rule, considered socially conservative or traditional have flocked to Bollywood as a great and evocative art form. A May 3, 2012 story on BBC.com reports on the impact Bollywood cinema is making on non-Indian communities around the world, including Germany, North Africa, Spain and France. The story reports that “the craze for Bollywood movies is resulting in Western actors coming to Mumbai to look for roles.”

The past few years have seen a surge of major studios embracing the theme park medium as never before – with park operators and land developers returning the embrace. The east-west cultural influence will continue to flow in both directions as the destination attraction sector continues to expand and evolve. Because of family-friendly, entertainment-rich, audience-beloved Bollywood, India is going into theme parks even though it may take a while for theme parks to fully go into India.

Judith Rubin
Judith Rubin ([email protected]) is a leading journalist, publicist, strategist, blogger, content marketing specialist and connector in the international attractions industry. She excels at writing about all aspects of design and technical design, production and project management. Areas of special interest include AV integration and show control, lighting design and acoustics, specialty cinema, digital video and world’s fairs. Judith has ties to numerous industry organizations. From 2005-2020 she ran communications, publications and social media for the Themed Entertainment Association (TEA). In 2013, she was honored with the TEA Service Award. She was development director of IMERSA, and co-chair of the 2014 IMERSA Summit. She was publicist for the Large Format Cinema Association in the 1990s, now part of the Giant Screen Cinema Association (GSCA) and has also contributed to the publications of PLASA, IAAPA and the International Planetarium Society. Already making her mark as a magazine and book editor, Judith joined World’s Fair magazine in 1987, which introduced her to the attractions industry. Launching as a freelancer in the mid 1990s she has contributed to dozens of publications and media outlets including Funworld, Lighting&Sound America, Sound & Communications, Urban Land, The Raconteur and The Planetarian. She joined InPark in 2010. Judith earned a Bachelor of Fine Arts from Pratt Institute. She has lived in New York City and the San Francisco Bay Area, and now makes her home in Saint Louis, where she is active in the local arts and theater community.
Share
Facebook
Twitter
Linkedin
Email
Print
WhatsApp
Pinterest
ReddIt
Tumblr
Previous articleMako Hyper Coaster to Be Centerpiece of Shark Wreck Reef at SeaWorld Orlando
Next articleDeveloping Dubai