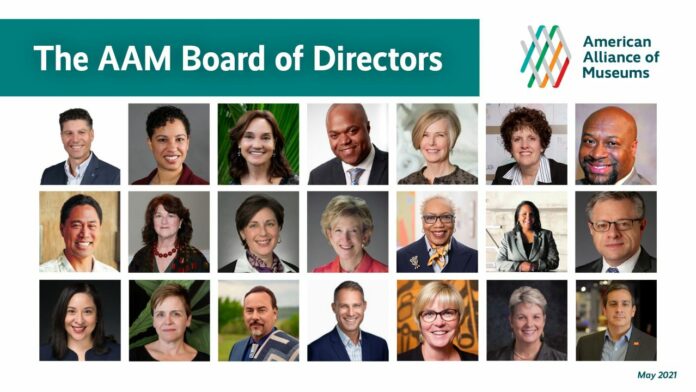 The American Alliance of Museums (AAM), the only organization representing the entire scope of the museum community, has announced that five leading professionals from the museum field have been newly elected to the board of directors, serving three-year terms. The incoming board members are:

Chevy Humphrey, President & CEO of the Museum of Science and Industry, enters into her second year as Board Chair. Jorge Zamanillo, Executive Director at HistoryMiami Museum, will serve a second term as Treasurer and Kippen de Alba Chu, Interim President of the Fort Worth Museum of Science and History, will serve a second term as Immediate Past Chair. Nathan Richie, Director of Golden History Museum & Park, and Karol Wight, President & Executive Director of the Corning Museum of Glass, were both re-elected for a second three-year term. See the full list of the Alliance’s board of directors.

“This incredible group of museum leaders joins the Alliance board during a critical time for AAM and museums,” said Laura L. Lott, Alliance President and CEO. “I am confident their experience, insight, and perspectives will continue to help strengthen our mission as we near the end of our five-year strategic plan and set our sights on rebuilding from the impacts of the last year.”

As the Alliance celebrates its 115-year anniversary, as well as the 50-year anniversary of Accreditation and 40-year anniversary of the Museum Assessment Program, this year, the Alliance also celebrates the most racially and ethnically diverse board of directors in its history. “The Alliance’s commitment to furthering DEAI and representation in the museum field and aspirations for itself has been paramount,” said Chevy Humphrey, AAM Board Chair and President & CEO of the Museum of Science and Industry. “While there is always more work to be done, the diversity of the board demonstrates the power of setting aspirational goals and holding ourselves accountable. We are thrilled to have these incredible leaders join the board at this pivotal juncture.”