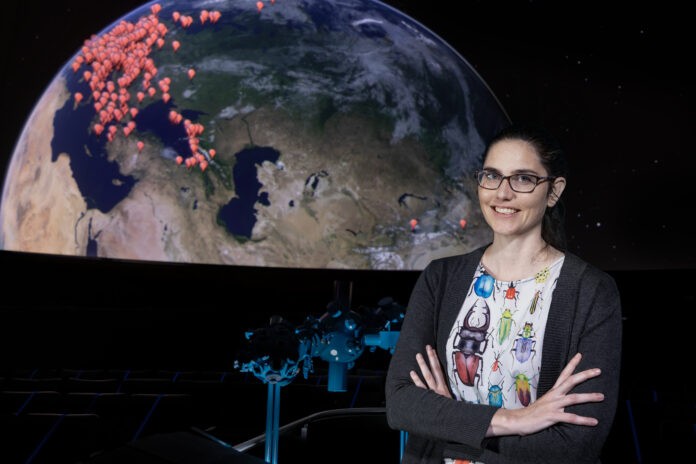 The Cleveland Museum of Natural History’s Associate Curator of Invertebrate Zoology, Dr. Nicole Gunter, has brought to life her vision to display biodiversity data on planetarium domes with the worldwide release of a new planetarium software plug-in. With funding from the National Science Foundation (NSF), Dr. Gunter partnered with Evans & Sutherland (E&S), a Cosm company, to develop the software update, which allows planetariums for the first time to immerse guests in the wonders of life on Earth as well as the far reaches of the Universe.

The release of the plug-in marks a significant milestone in the fulfillment of Dr. Gunter’s NSF CAREER grant–funded project, which aims to further important discourse on the processes shaping our world and the critical role of conservation and biodiversity.

“While the primary focus of planetariums is astronomy data, I knew there was no reason that planetariums couldn’t also be used for teaching Earth and biological sciences,” said Dr. Gunter. “Not only can places like the Museum rely on their own biodiversity records to tell the story of life on Earth, but they can also harness the 1.6 billion records made possible by global initiatives including NSF’s 2013 call for a united, nationwide digitization effort.”

With the addition of the plug-in to E&S’s Digistar planetarium software, it is easy to see biodiversity trends, like the geographic range of threatened or invasive species over time, and patterns, such as the monarch butterfly’s seasonal migration path, on the big screen. This engaging, easy-to-understand data visualization, coupled with interactive presentations by scientific experts, can shed light on the need for conservation efforts and inspire planetarium guests to lead the charge.

“Dr. Gunter’s work is strengthening the Museum’s long legacy of inspiring our community with the wonders of science and nature,” says Museum President & CEO Sonia Winner. “The educational programs that will result from this software development will serve as high-profile examples of the Museum’s delivering on its promise to interweave our research with public education.”

The plug-in developed by E&S provides a tool to convert publicly available specimen records to a format that can be projected onto the dome via E&S’s Digistar software, which powers planetariums at more than 160 locations across the world.

“Dr. Gunter’s vision to integrate biodiversity data into Digistar and display it in real time on a dome in 8k resolution was an exciting and compelling new use case, and it provides an opportunity to expand Digistar’s capabilities to a new audience,” said Jason Taylor, Product Manager at E&S. “Being able to display biodiversity data—which can be a very emotional topic—in a visual way is so impactful.”

Planetarium educators can now use the new tools to leverage the 1.6 billion specimen records and create customized programs on biodiversity. Biodiversity data from global aggregators can be filtered using 130 fields—such as month and year of specimen collection, the specimen collector and corresponding institution, and the specimen’s species and family—that tailor the map that gets projected onto the planetarium dome.

The plug-in can harvest biodiversity data directly from the NSF-backed aggregator app Integrated Digitized Biocollections (iDigBio). Educators at institutions using this new software in their planetariums will be able to instantaneously access the iDigBio portal data with a click of a button, allowing them to engage in dynamic data exploration or answer audience questions.

“As scientists, we often focus on sharing our research in publications or at conferences,” says Dr. Gunter. “By using these tools, I believe we can have a bigger impact communicating our results to a broader public audience. I want to ignite a sense of wonder that there is still so much to learn about our planet and inspire the next generation of scientists.”

A key component of the NSF project is breaking down the traditional barriers between scientists, educators, and the general public. With planetariums typically reserved for astronomers, it took a great deal of collaboration to fully realize the potential of this endeavor. Dr. Gunter will continue this grant-funded project over the next several years, conducting field research in Australia, diving into the Museum’s collections, and, ultimately, creating an educational program that will tie it all together.