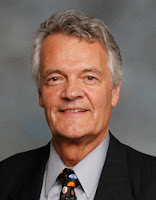 Chicago, IL, USA (March 7, 2012) /PRNewswire-USNewswire/ — Adler Planetarium President Paul H. Knappenberger Jr., Ph.D., announced today that he would step down at the end of 2012 after 21 years of service.

Knappenberger, who joined the Adler in 1991, has led the Museum through two major long-range plans that have significantly strengthened the planetarium. The most recent was initiated during the Adler’s 75th anniversary in 2005. In that year, the institution announced a strategic plan to transform the Adler from a traditional planetarium into a 21st century space science center. As that effort reached a successful conclusion last year, he began discussing his retirement with museum Trustees.

“In 2005, we announced a new vision to inspire the next generation of explorers and become the world’s leading space science center,” said Knappenberger. “Thanks to the leadership of our Trustees, we have accomplished the central goals of our strategic plan, including a major fundraising initiative.”

“We are grateful to Paul for his service and experienced leadership,” said John W. Estey, president and CEO of S&C Electric Company and chairman of the Adler Planetarium Board of Trustees. “In his career at the Adler, Paul has reinvented America’s First Planetarium to be a leader in research and public learning. We are doubly grateful Paul has agreed to continue until we identify his successor later this year.”

Upon his arrival at the Adler, Knappenberger initiated a research program which today features Ph.D. scholars working in astronomy, the history of astronomy and, most recently, the study of how people learn about science in informal settings. The latter brought the Adler’s understanding of its audiences into sharp focus. Since 2009, the museum has been a lead partner in the Citizen Science Alliance, a global consortium engaging a large online community of enthusiasts, the vast majority with no professional degrees in astronomy, to analyze vast data sets generated by astronomy researchers around the world. The Adler is the lead museum partner in the Citizen Science Alliance and its popular website platform Zooniverse.org.

As part of the Adler’s 2005 strategic plan, Knappenberger lead a partnership with Sesame Workshop and the Beijing Planetarium to create One World, One Sky: Big Bird’s Adventure, a planetarium show taking young explorers and their favorite Sesame Street friends on a journey of discovery. The show, which opened in 2008, now plays in more than 55 theaters around the world and is likely the most-watched planetarium show in history.

In 2010, the Adler opened Planet Explorers, engaging the youngest museum visitors (ages 3–8 years) in a modern day space adventure. The permanent exhibition, generously funded by The Boeing Company, invites young explorers to learn about conditions necessary to sustain life on Earth and in space as they conduct a mission launch sequence, visit the International Space Station and ultimately land on an imaginary Planet X.

Later in the same year, the Adler closed its historic Sky Theater – the first planetarium theater in the western hemisphere – to begin a major renovation. After a period of ten months and an investment of more than $15 million, the museum unveiled the new Grainger Sky Theater in July 2011. The world’s most technologically advanced theater, it is the centerpiece of the Adler’s popular Deep Space Adventure experience, a program of exhibitions and an entirely original, high-resolution show.

As a result of the strategic plan’s innovations, the Adler’s annual attendance has increased more than 17% since 2005, despite serious challenges faced by cultural institutions in the ongoing economic downturn. Attendance in the current year, following the opening of the new Grainger Sky Theater, is up by more than 14% over 2011.

Knappenberger is a member of numerous science and education associations, including the American Astronomical Society, the International Planetarium Society, and regional planetarium associations. He served on NASA’s Space Science Advisory Committee and chaired its Education and Public Outreach Task Force. He currently chairs the Chicago Council for Science and Technology, and has served as President of the Association of Science-Technology Centers and on the Council of the American Association of Museums. In Autumn 2011, he was recognized by the Illinois Association of Museums for his 44-year career as a museum professional and leader.

Knappenberger is the past president of Museums in the Park, a consortium of the ten major museums on Chicago Park District property. He recently chaired the Museum Partners group of the Chicago Systemic Initiative, part of a nationwide effort focusing on systemic improvement of math and science instruction in schools.

A native of Reading, Pennsylvania, Knappenberger, 69, received his Bachelor’s degree in mathematics in 1964 from Franklin and Marshall College. He earned a Masters and Ph.D. in astronomy from the University of Virginia, where his research efforts included work in optical interferometry.

ABOUT THE ADLER PLANETARIUM
The Adler Planetarium – America’s First Planetarium – was founded in 1930 by Chicago business leader Max Adler. The Adler is a recognized leader in education, with a focus on inspiring young people, especially women and minorities, to pursue careers in science, technology, engineering and math.  www.adlerplanetarium.org.

Joe Kleimanhttp://wwww.themedreality.com
Raised in San Diego on theme parks, zoos, and IMAX films, InPark's Senior Correspondent Joe Kleiman would expand his childhood loves into two decades as a projectionist and theater director within the giant screen industry. In addition to his work in commercial and museum operations, Joe has volunteered his time to animal husbandry at leading facilities in California and Texas and has played a leading management role for a number of performing arts companies. Joe previously served as News Editor and has remained a contributing author to InPark Magazine since 2011. HIs writing has also appeared in Sound & Communications, LF Examiner, Jim Hill Media, The Planetarian, Behind the Thrills, and MiceChat His blog, ThemedReality.com takes an unconventional look at the attractions industry. Follow on twitter @ThemesRenewed Joe lives in Sacramento, California with his wife, dog, and a ghost.
Share
Facebook
Twitter
Linkedin
Email
Print
WhatsApp
Pinterest
ReddIt
Tumblr
Previous articleDisneyland Resort Announces Opening Date for Cars Land and Buena Vista Street at Disney California Adventure
Next articleUPDATED: Legendary Disney Songsmith Robert Sherman Passes Away at 86