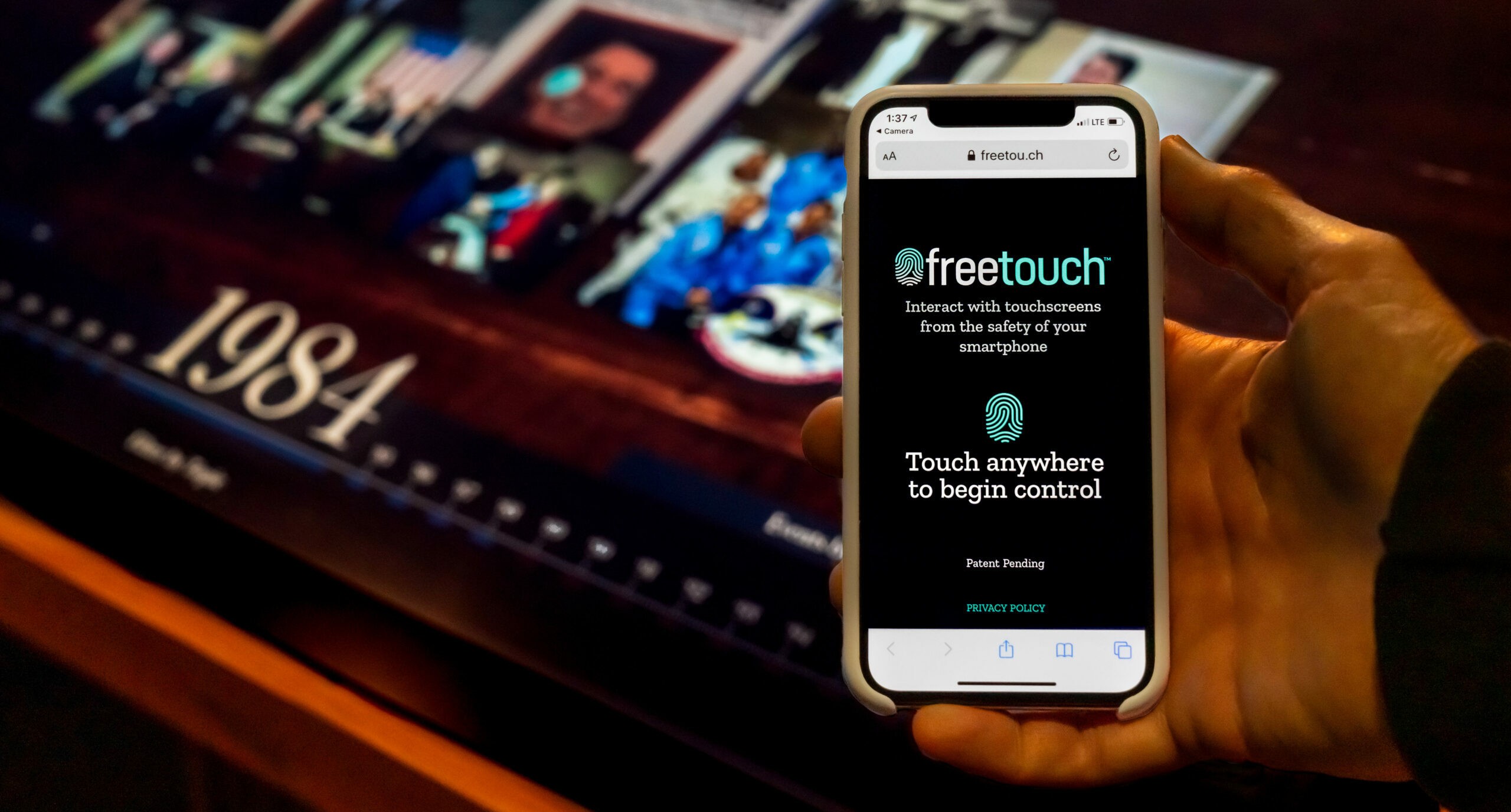 A few issues currently facing the attractions industry: How to keep experiences engaging and immersive while moving toward touch-free; how to engage visitors who are already deeply engaged with their mobile phones; how to reopen and refresh a facility and its exhibits on a pandemic budget – and what to do with touchscreen interactives in a time when touching common surfaces is problematic.

With the launch of his new product Freetouch™ (patent pending), experience designer Darren David offers an umbrella solution that not only addresses the issues but suggests new creative possibilities.

As the CEO of Stimulant, David has been on the design and production end of things, creating many interactive exhibits for clients in museums, visitor centers, brand experiences, retail and other public-facing environments. When the pandemic hit, those clients started calling asking for new solutions. Their touchscreen experiences were now potential liabilities. David devised a new, proprietary platform that brings together QR codes, mobile devices, and cloud computing, making the most of advances in the technology to quickly create the Freetouch prototype. “The QR/mobile confluence has hit a tipping point that hadn’t existed before,” he says. “You used to have to download a separate app to read a QR code but now it’s built in to the camera app on the mobile device. Snap, tap and you are there.”

Based on its attributes and the reaction of early adopters and testers, Freetouch seems likely to be quickly and warmly embraced by the attractions industry. The ability to keep existing displays viable is good news for suppliers and operators alike, and the interface should have strong appeal for guests.

The technology is designed to be what David calls “absolutely frictionless, with no road bumps between the visitor and the experience,” enabling them to interact with exhibits and access their content without touching anything except their own smartphones. It may be the ultimate bring-your-own-device (BYOD) scenario. The visitor points their device at a QR code on the display to initiate immediate control from their mobile web browser, with no downloads, registrations or logins required. The smartphone then acts as a touchpad or “virtual mouse” with which the visitor navigates the display, cued by a cursor overlay that appears on the touchscreen.

David says, “Once the web app loads, it’s one tap and your phone works like the touchpad on your laptop, something you already know how to use.” Incorporating the phone into the experience has the obvious advantage of letting the visitor stay in a familiar, high-comfort zone. The phone becomes the liaison to the experience and less of a potential distraction from it. It may even deepen the experience and the connection to the story or content because – face it – for many people something only becomes real when they find it on their own phone.

David has endeavored to ensure a “frictionless” Freetouch experience for the operator as well, with attention to cost, installation and simplicity. Based on dialogue with his clients and colleagues in the attractions community (“I talked to about 100 clients and potential clients, large and small”) he “knew Freetouch had to fit into an operational budget and not a capital budget, and be easy to install.”

Freetouch installs onto touchscreen PCs from a downloadable executable, and has been designed to work even on older operating systems. Freetouch is offering a 14-day free trial and a range of purchase and licensing subscription options, and rolling out a distributor network and creating partnerships with technical integrators.

“Our networking infrastructure is built on Microsoft Azure, but the visitor-facing components run in the browser in any device, Apple or Android, phone or tablet,” says David. “We built privacy and security into the system to meet stringent IT requirements. The development was based on things we’ve learned at Stimulant over the past 15 years building systems like this. It’s been really helpful that we have access to museums and attractions full of touchscreen exhibits where we can can log in and do plenty of field testing.”

Brent Kilpper is Associate Director of the Reagan Ranch Center in downtown Santa Barbara. The four-story, multi-use facility includes a museum that is currently open on a limited basis, accommodating group visits by reservation. The name of the facility refers to the late US president’s favorite rural getaway, a ranch nestled in the nearby mountains. The Center and the ranch itself now belong to the Young Americans Foundation, an educational 501(c)3.

The centerpiece exhibit in the main gallery of the Reagan Ranch Center is the Timeline Table, a popular, touchscreen interactive. It was extensively re-envisioned and updated in 2019, with the services of Stimulant, and is now also Freetouch enabled. “We have it up and running now and we’re really pleased,” says Kilpper. “It lets you use a QR code and turn your phone into a tracking surface, and it works fantastically. We retained all functionality of the exhibit; it was really just a perfect tool for this. It’s very simple, just use your cellphone and away you go.” The Timeline Table has five user stations with room for others to gather around.

The Timeline Table at the Reagan Ranch Center now operates via Freetouch.

The Center is also in the process of applying Freetouch to two other interactive exhibits in the museum that allow users to explore archives of Reagan presidential radio addresses and White House logs. Each of those accommodates one active user at a time.

About half of the building’s 20,000 square feet is devoted to museum galleries and at this writing, the Reagan Ranch Center was working toward opening to the general public within a few weeks at about 25% capacity with advance reservations. “Freetouch will allow us to use the interactive exhibits in the way they were intended to be used while maintaining safety aspects,” says Kilpper. The Center is currently completing a new exhibit (with Stimulant) on the first floor featuring a chunk of the Berlin wall, to coincide with the anniversary of the wall’s falling on November 9, 1989.

Applying Freetouch at the Adler Planetarium

The Adler Planetarium in Chicago, established in 1930, was the first planetarium in the Western Hemisphere and continues to be a leader in the field, known for innovative exhibits and display technology. With the physical building closed since mid-March 2020, the Adler has not been able to celebrate its 90th anniversary as originally envisioned, but has continued to serve its community with novel digital offerings as a special committee shapes a strategy to eventually reopen.

With that in mind, they have been trying out Freetouch on various exhibits according to John Beckman, Director, Exhibit Design and Production, who joined the Adler at the beginning of the year. To the Adler, Beckman brings 16 years’ prior experience with the Museum of Science and Industry, Chicago.

While shaping their reopening strategy, the Adler Planetarium is trying out Freetouch on various touchscreen exhibits.

“Darren came along and it occurred to us that it would be interesting and relatively easy to pilot Freetouch on our dozen or so touchscreens, and that it would give us the opportunity to preserve what we’re doing with those exhibits,” says Beckman. “From an internal point of view it is logistically friendly. It installs easily, most everyone has a good phone nowadays and we have good Wi-Fi. So it is low friction in terms of getting it in on our machines, and for the guest as well.”

Experimenting with Freetouch has also stimulated some creative thinking among Adler’s in-house team. “Looking at this tool and thinking about what a post-COVID society will need has made us think about what other practical options we could bring in, and how we might configure immersive exhibits in future,” says Beckman. “We’re mostly at a very high concept stage right now, but are working on project proposals for potential renovations when fundraising gets back into a groove.”

Beyond the immediate retrofit, how might Freetouch influence experience design development? “Freetouch was designed first and foremost to keep existing experiences in operation, but it does open up a lot of creative possibilities for the future,” says David. “We’re already talking to several agencies that are looking at pivoting some of the concept design phases they were in, changing the interactive model to something touchless. From the experiential side we’re seeing that there are significant features and functionalities to add to the customer experience beyond ‘Hey, I’m afraid to touch this screen.’”

According to David, Freetouch can be used to transform passive displays to interactive displays. “Existing digital signage or wayfinding kiosks could be converted to interactive screens,” says David. “The QR code can also be decoupled from the screen, so a visitor could, for instance, snap a QR code on a pole near them and gain control over a huge display that’s far away.” Scale is no obstacle. “There’s nothing stopping that newly interactive screen from being a billboard in Times Square, a stadium display, an LED wall or a projection on a magic castle. The phone in the guest’s hand gives them superpowers. Basically we’re enabling new kinds of interactivity on existing hardware that were not before possible without new hardware.”

It can also be used to enhance accessibility. “Freetouch can help designers provide additional ways for mobility impaired individuals to interact with displays that might have previously been challenging before,” David says.

“A new interface and a clean solution”

“This kind of application will definitely apply to broader, interactive user experiences using screens, projections or physical effects,” forecasts Chris Conte, VP New Business Development at Electrosonic Inc. “Anything that creates a new interface is really the key, and the trend moving this forward is the cellphone as the connection point,” says Conte, who has partnered with Stimulant as a content producer on past projects.

“Darren has been very clever in making Freetouch as simple as possible,” says Conte. “You just need some computer chops – installation is really a brief process and then it’s done. The QR code enables your smart device to become an extension of the touch interactive. As technical designers, we have been looking for the right solutions to help operators. Freetouch is intriguing because it is so personal – we’re already all comfortable with our phones. It’s also one of the cleanest solutions I’ve seen on the market. It doesn’t require redesigning the experience. I’m excited about implementing it in some existing museums and looking at it for new projects.”

Bottom line: Freetouch was created to enable operators to reopen with their interactives running as before, avoiding extensive technical changes and without taking a big bite out of the budget. But it’s way more than a COVID fix. “The response has been overwhelmingly positive, people blown away at how deceptively simple of a solution it is,” says David. “We’re talking to some very recognizable household brands and we think you’ll be seeing Freetouch on a display near you very soon.”