Al Cross of PGAV Destinations on The Five Spot 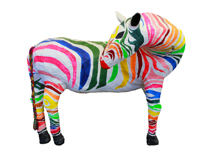 (November 15, 2013) — Over the next week, thousands of IAAPA delegates will be visiting Central Florida’s newest attractions.  A number of them, including the Entry Experience and Space Shuttle Atlantis at the Kennedy Space Center Visitor Complex, Turtle Trek and Antarctica: Empire of the Penguin at SeaWorld Orlando, and Cheetah Hunt at Busch Gardens Tampa Bay all bear the stamp of PGAV Destinations.

This St Louis-based firm has created a term for what they do – “Destinology”, which they define as “the art and science of creating successful destinations.” Throughout the company’s nearly five decades of practice, they have developed thousands of project in more than thirty states and on five continents. Their staff of more than 100 full-time professionals includes planners, architects, brand specialists, earned revenue specialists, interior designers, landscape architects, artists, producers, and interpretive designers.

Are there hidden Mickeys or Shamus in Antarctica?

In the true spirit of the question, I must answer by saying that I may neither confirm nor deny anything that may be implied by answering said question. However, recently our entire company and guests flew to Orlando to view, as a group, the work at Antarctica; Empire of the Penguin as well as The Atlantis Exhibit at Kennedy Space Center. In fact, you can see the entire story on Twitter (#PGAVtrip) or Storify. We did, in fact, find “hidden” things, and it appears that guests are discovering these Easter Eggs as well. Such discoveries may or may not be limited to likenesses of Shamu. By the way, if there were hidden “M I C K E Y S” in a Sea World project we would be … well … heh … it wouldn’t be good for us.

Why does quite a bit of your work involve bears?

Because Bears are cool.   But seriously, the truth is that there is a story to tell. Global Warming and habitat depreciation are meaningful, topical, and emotionally charged, important story topics. Bears … particularly Polar Bears … are charismatic creatures who automatically generate interest, making them a good choice for Zoological institutions to catalyze the educational debate on these subjects. In the case of our work, like Louisville Zoo’s Glacier Run (which won the AZA exhibit of the year award) for example, there is often a very compelling human-to-bear back-story, too. It is certainly true that lately we have authored several major bear exhibits. All of them have received some attention, (and we are super-proud of them), but the truth is we have designed multiple exhibits for the same species with regularity over the past 40 years because we are animal exhibit experts. The world wants these stories and wants to see these animals. So, like I said … it’s because bears are cool.

The Atlantis exhibit integrates an existing blockbuster attraction – the Shuttle Launch Experience.  What considerations – architecturally and thematically – were made to make this happen?

Atlantis was destined to become the new magnet of the Visitor Center Experience. It is just too good and too important of a story to be anything else. It made complete sense for us to leverage the popularity, infrastructure, and location of the existing SLE as an adjunct to Atlantis. In other words, don’t compete with it, just use it to make an even more robust and complete experience. In this case, more was gained by two related stories together, than by separating these two stories. The guest would have wondered why we split two “Shuttle Program” attractions. Thematically, it wasn’t difficult, as Atlantis tells the emotionally moving story of the people related to its creation, and uses the artifact as the heart. SLE focuses more on thrilling the audience with the power of the vehicle launch. Both are important and sit well together.  The symbolism of the Architecture encompasses both, implying both launch and landing. The architectural “planning” part was comparatively easy in the context of these other deep, artsy issues.

There has been quite a bit of debate over how the St. Louis Zoo should approach its expansion into its newly acquired property across the highway. What would you, as a zoo and attraction architect, like to see done?

The Zoo is a dear treasure to the city of St. Louis (I am a native) and the world. (It’s famous past director Marlon Perkins was the long-time host of the classic TV show Mutual of Omaha’s Wild Kingdom.) Any change to it naturally attracts scrutiny. I just want it to be properly stewarded. The highway separation creates the opportunity to relocate back-of-house functions, which, in turn, creates attraction/exhibit space contiguous to the zoo proper. That is likely to be only good for the guest experience. The talk of a boutique hotel with animal interaction as part of the experience is very exciting to me personally. We’ve been talking about doing something like this for a long time. In that case, location would be super-critical to its success. The zoo is well-run by smart people. I am certain they will make clever, wise choices.

We possess the capacity for both good and evil. We use them discretionarily to affect guest experience, and sometimes for entertainment, especially at our company’s somewhat renown gag gift exchange parties during the Holidays. These events are usually biased toward evil. Speaking as both victim and mastermind, I am proud of how much creativity we bring to bear, even when our purposes are nefarious.  Were we to be on the SeaWorld entrance project and I am not saying we are or aren’t … we couldn’t talk about it. SeaWorld employs just as strict a confidentiality policy on consultants as everyone else in this industry. However, from what I’ve read and seen about the front gate, and spe­­­aking from a personal point-of-view, the idea of re-imagining the guest’s introductory moments to the original SeaWorld Park, where that company leads the worldwide discussion on our connection to the Ocean’s animals is a pretty cool opportunity. Ya’ know … for … somebody.

Joe Kleimanhttp://wwww.themedreality.com
Raised in San Diego on theme parks, zoos, and IMAX films, InPark's Senior Correspondent Joe Kleiman would expand his childhood loves into two decades as a projectionist and theater director within the giant screen industry. In addition to his work in commercial and museum operations, Joe has volunteered his time to animal husbandry at leading facilities in California and Texas and has played a leading management role for a number of performing arts companies. Joe previously served as News Editor and has remained a contributing author to InPark Magazine since 2011. HIs writing has also appeared in Sound & Communications, LF Examiner, Jim Hill Media, The Planetarian, Behind the Thrills, and MiceChat His blog, ThemedReality.com takes an unconventional look at the attractions industry. Follow on twitter @ThemesRenewed Joe lives in Sacramento, California with his wife, dog, and a ghost.
Share
Facebook
Twitter
Linkedin
Email
Print
WhatsApp
Pinterest
ReddIt
Tumblr
Previous article
MediaMation Awarded Patent for X4D Shared Drive Mechanism
Next article
WhiteWater Group of Companies Showcase New Attractions at IAAPA Attractions Expo