Behind the scenes, watching the trackless vehicles silently gliding across the floor to dock at the loading platform at Antarctica seems like a well-choreographed ballet. The cars, each capable of carrying 8 passengers, are round and larger than one might think. But there’s a lot going on “under the hood” of each vehicle. “And,” says Bill Bunting, half-joking, “we have to have a place to store all the batteries.” 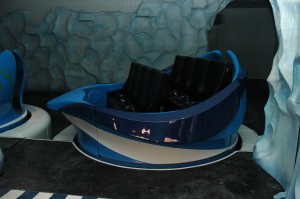 Bunting is the Manager of Business Development for Oceaneering Entertainment Systems, the design, engineering, and manufacturing firm responsible for implementing the revolutionary ride system behind SeaWorld’s new Antarctica: Empire of the Penguin attraction, recently opened in Orlando. Determining how to power the vehicles proved to be one of the main challenges in creating the attraction.

“The typical battery storage solution,” says Bunting, “is to build a vehicle with a giant battery pack that runs all day and charges all night, similar to a golf cart.” But there are limitations, and that type of system requires huge batteries that create other restrictions.

In order to solve the problem, Oceaneering combined solutions developed in other industries in a new way. It makes sense, given the company’s background. Oceaneering’s main business, as its name implies, is as a deep water submersible provider. Remember the Gulf oil spill a few years back? It was Oceaneering’s remote operating vehicles that helped stem the flow of oil into the water. The company also has a division focused on advanced technology for NASA, the U.S. Navy, and other government units. 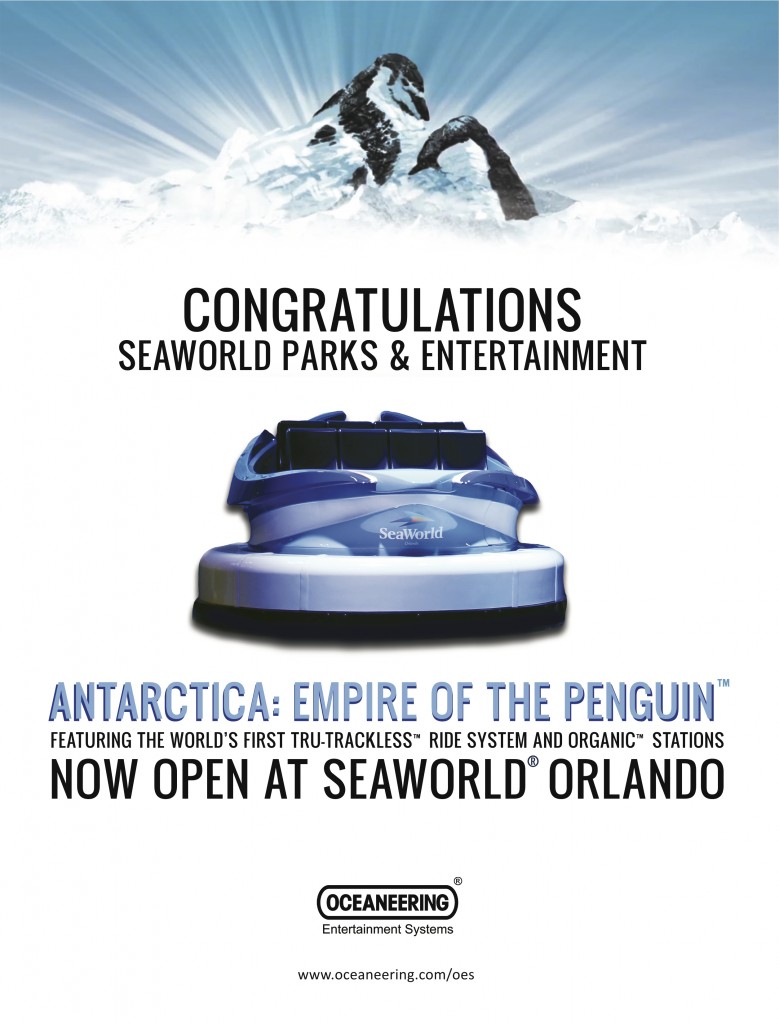 They got their start in the entertainment market after Universal Studios Orlando was opened. The initial Jaws attraction (now gutted to make way for a Harry Potter expansion) wasn’t performing reliably, so Universal asked Oceaneering (which knew two things really well: robots and water) to step in and fix the mechanical sharks. That led to more work for Universal, including several projects at Islands of Adventure, and from there, the company found itself entrenched in the entertainment market.

But it was the other arms of Oceaneering that played a big role in Antarctica. The space technology wing had plenty of data and research on battery options and helped develop the solution: essentially a battery charging point at the load and unload stations that “top off” the battery every time a vehicle is stationary. But the batteries only scratch the surface of this first of its kind attraction.

Sure, there have been other trackless rides before, but most all of those still rely on a buried guide wire to follow. Antarctica’s ride paths can be changed in about fifteen minutes. It’s just one of the things that makes this technology different.

“I told my staff: If you walk through this threshold to participate on this project as a team member, you have to leave everything you believe to be true behind. Because we are going to reinvent everything and by doing so – removing those handcuffs of old design philosophy – we were able to really release preconceived notions of what was possible and create the incredible.”

The attraction begins with several preshow scenes, each room designed to be slightly colder than the previous, to help acclimate guests from the Florida sunshine to the 30-degree Penguin habitat they will be in shortly.

Guests enter a small chamber with their group of riders to watch a short final video preparing them for the story ahead, and reminding them that the adorable penguin, Puck, will be meeting them on the ride shortly. A wall vanishes and before riders sits an empty ride vehicle, its door open to usher riders in like a mama penguin’s wing shielding her young. Somewhat secluded, riders may not realize there are four loading docks at Antarctica, and Bunting says the system can be designed to handle more docks.

One benefit of the trackless system is that vehicles can be dispatched in any order, as soon as they are ready. If one vehicle is taking longer to load, it doesn’t hold up the other vehicles. Once a spot is open, a new vehicle glides in and parks to help keep throughput high. Incidentally, the units have a 4mm parking precision. The margin of error during the rest of the ride varies based on speed and location, although vehicles are able to come with a foot of each other. 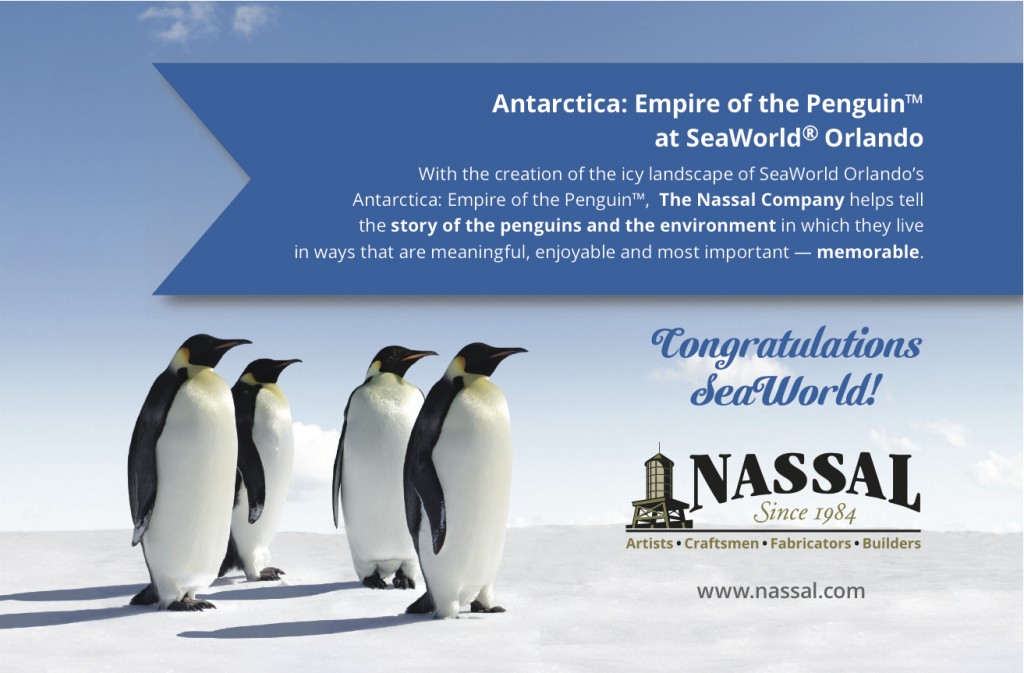 Guests then embark on the mild or wild experience they selected earlier in the queue (the system defaults to mild unless the operator chooses wild). Wild or mild has a direct impact on how much of the vehicle’s movement capability is actually used. Each car offers pitch and roll, 360-degree continuous yaw (spinning), and the base unit can rotate independently of the top. That means guests’ direction can be targeted to one specific point while the vehicle is moving in a different direction (that’s important for viewing 3D, even though that’s not a part of Antarctica). Morrow didn’t think that much control over guests’ line of vision was important. In fact, he wanted the complete opposite. He wanted guests to look where they please, and even interact with other guests, much like a real penguin would.

One of Morrow’s favorite moments is when one vehicle turns around and sees another vehicle and does a penguin bow. The other vehicle mimics it and they start moving together. “The guests are face to face and start to interact with one another,” says Morrow.

It’s clear that this experience is something different.

“This is not a dark ride,” says Morrow. “I think that is a hideous word to use for this ride. This is a new genre that I’m waiting to have identified. We do not restrict your views. We do not have show forward motion. We have 360 experiences like the real world. There’s freedom here. We remove those old barriers of 3D glasses and big walls on ride vehicles. I don’t want to ride around in a coffin, I want to ride in an open vehicle and see the world and look at what I choose to look at and not be told what to do by a ride. The ride is not in control anymore, the guests are now in control of their experience.”

Of course, there are various systems that ensure everything runs smoothly. Vehicles are highly intelligent and recognize each other as individual units, knowing where other units are, where they are going and what to do. Oceaneering developed a sophisticated control system to ensure redundant safety and reliability. Each vehicle is equipped with an on-board guidance system. It reads passive markers laid in the floor, buried in the concrete just below the surface. Each marker, about the size of a quarter, helps create a grid pattern that the guidance system recognizes. Each vehicle’s position is uploaded to a central system that monitors all the vehicles and a third system oversees both of those sub-systems to make sure everything is okay. Any one of the three control systems can shut the ride down. For added safety, trip tape is affixed to the edge of all cars that immediately shuts down all movement when activated should a vehicle encounter any unexpected objects in the ride path.

Antarctica Rocks: Behind the scenes with Nassal

2) How did you become skilled in recreating rockwork? Rockwork is a skill and artistry. Nassal is fortunate to have some of the most talented rockwork carvers, artists, and painters in the industry on our team. Real-world experience, training, and a natural skill for creating realistic rock that mimics the icy landscape of Antarctica or the savannas of Africa (to name just a couple), makes Nassal artists and carvers hands-on and talented.

3) What exciting projects are you working on now? We are working on some major projects in Orlando and around the world that we will be able to talk about soon.

But why trackless?  “Why not trackless?” responds Mike Denninger, Corporate Senior Director of Rides and Maintenance for SeaWorld Parks and Entertainment. “With all the flybys and all the interactions [with the other vehicles] the trackless system with the motion base on top of the transport was a perfect complement to what we were trying to offer for the overall guest experience.” In other words, going trackless was the best way to allow guests to feel like they are a penguin slipping and sliding along the ice.

And, in reality, the team pretty much achieved that. The vehicles silently glide around on the industrial grade flat cement floor as if they were on ice (at speeds up to 6ft/second), and the 4-ton motion simulator replicates the penguin waddle to guests’ amusement.

The ride is quick, with open-space scenes that the vehicles traverse, each one choosing one of several programmed routes, nearly guaranteeing a different ride experience each time. The ride ends with a dramatic reveal of the live penguin environment before the vehicles spin around a corner and drop guests off in the middle of the snowy habitat, where they can get almost close enough to touch the birds. Guests are likely to be so transfixed by the penguins in front of them they might not even notice their vehicle slowly gliding away to pick up the next group of riders.

“The technology is clean and it’s invisible,” says Morrow. That was important to the park in creating an attraction designed for the entire family. And what’s next for this technology? Morrow thinks it may be possible for riders to actually control the movement of their vehicles in future iterations. Bunting thinks the sky is the limit.

“There is nothing prototypical about this technology,” says Bunting. “We simply brought together proven technologies from other industries and combined them in a new way.” The vehicle tracking system, for instance, came directly from automotive assembly factories and the battery systems originated in space exploration equipment.

“Once the creatives in our industry understand how this system works and sees it firsthand at SeaWorld, then we will start to understand exactly what this system is capable of and how it can grow,” says Bunting. “Until then, we’ve only scratched the surface of trackless vehicle technology.”        •  •  •