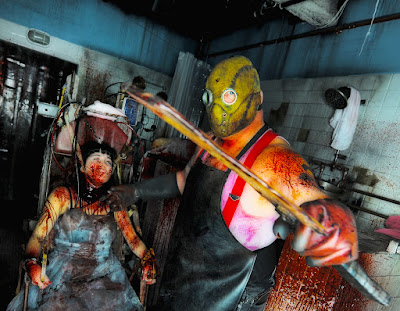 Orlando, FL, USA — Halloween comes more than once a year at Eli Roth’s Goretorium in Las Vegas where guests are exposed to what may be the most intense live terror experience in town. Alcorn McBride plays a big part in the spookfest, with three compact Digital Binloops and two ProTraXX units for audio playback. A versatile, frame-accurate V4 show controller runs the show from the central equipment room.

“All of the sounds and music are played through Alcorn machines from the entrance in the lobby area to the last room, plus the bathrooms and the Baby Dolls lounge,”says consultant Dale Whealton CTS who specified the gear. “The triggered sounds are the most interesting. They might include a character that appears and screams at you or an animatronic animal that jumps out. The Alcorn V4 show control unit triggers the animatronics, the effects and the sounds. Manual triggers are activated by the actors.”

He notes that 96 tracks of Digital Binloops are used for audio beds and point source audio while the ProTraXX units are primarily deployed for the triggered samples.

According to project lead Gary Brown with integrator Technology West, Alcorn equipment is the industry standard for attractions like Goretorium. “I come from a themed entertainment environment, and Alcorn is the standard system show controller at the major theme parks,” he says. “There are 33 system inputs currently. An optical trigger delivers signals to the V4 to commence special effects, such as making a mechanical dog bark.” Eight audio triggers are dedicated to the bathrooms alone, delivering sounds of whispering, laughter and rats.

Whealton reports that Alcorn equipment was chosen for its robustness in a grueling environment. “A haunted house is not the most friendly environment for electronics,” he reminds us. “There’s a lot of fog, steam, blood and body parts. But the CompactFlash format of Alcorn equipment is robust, and we’ve never experienced a failure. We’ve never had to worry about it. It performs fabulously.”

Brown concurs. “The Alcorn equipment runs five nights a week for seven hours a night and performs fantastically,” he says.

About Alcorn McBride:
Founded in 1986, Alcorn McBride is the leading manufacturer of show control, audio and video equipment for the themed entertainment industry, and a rapidly growing provider of audio and video systems for retail environments and transportation applications. Staffed by some of the industry’s best engineers and backed by outstanding customer support, the company has demonstrated great agility in bringing new designs to market. A hallmark of Alcorn McBride products is their durable, zero maintenance design. The company’s products provide consistent, reliable operation for audio and video playback applications worldwide.

About Eli Roth’s Goretorium:
Eli Roth’s GORETORIUM immerses visitors into a multi-level maze of frights, as they follow the tale of Sin City’s most deadly mythical hotel and casino, The Delmont. The self-guided horror experience begins in the lobby of the Delmont and unveils gruesome and ghastly sights of past hotel guest victims and the serial-killing family behind the deeds at every turn. Employing high-tech Vegas showmanship with old-fashioned scares, the terrifying labyrinth of live actors, animatronic frights and stunning special effects is contained in a vintage hotel setting that rivals Hollywood’s best movie sets. Eli Roth’s GORETORIUM also includes a freaky, 60’s inspired lounge called “Baby Dolls.” Featuring a magnificent view of CityCenter, the bar will entertain with caged zombie dancers and live“feedings.” GORETORIUM also features a one-of-a-kind horror retail shop and a to-go bar called “Bloody Mary’s,” specializing in gruesomely themed cocktails.

Joe Kleimanhttp://wwww.themedreality.com
Raised in San Diego on theme parks, zoos, and IMAX films, Joe Kleiman would expand his childhood loves into two decades as a projectionist and theater director within the giant screen industry. In addition to his work in commercial and museum operations, Joe has volunteered his time to animal husbandry at leading facilities in California and Texas and has played a leading management role for a number of performing arts companies. Joe has been News Editor and contributing author to InPark Magazine since 2011. HIs writing has also appeared in Sound & Communications, LF Examiner, Jim Hill Media, and MiceChat. His blog, ThemedReality.com takes an unconventional look at the attractions industry. Follow on twitter @ThemesRenewed Joe lives in Sacramento, California with his fiancé, two dogs, and a ghost.
Share
Facebook
Twitter
Linkedin
Email
Print
WhatsApp
Pinterest
ReddIt
Tumblr
Previous articleCedar Fair CEO Matthew Ouimet keynotes TEA Summit conference in Anaheim April 4-5, 2013
Next articleTivoli Copenhagen Expands Park Footprint with New Themed Land and Attractions