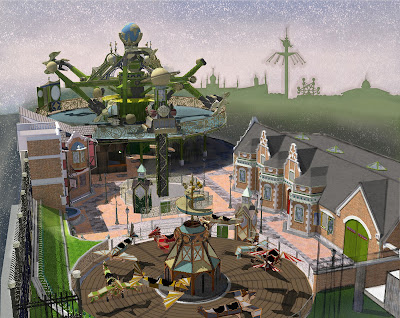 Copenhagen, Denmark (November 5, 2012) — In 2013, Tivoli in Copenhagen, Denmark, will be enlarged by 600 m2 and offer three new amusement rides in a new theme area in the part of the Gardens which is called the Merry Corner. The inspiration for the 1200 m2 new area is the world famous Danish astronomer Tycho Brahe, and the theme will circle around stars, galaxies and planets. Among the attractions in the area is a new, wild ride for adults which is only found in very few amusement parks in the world. But young children and tweens can also look forward to new thrills. The purpose of the new amusement area is to contribute to a renewal of Tivoli in the coming years and to ensure an increase in the number of young visitors and tourists when Tivoli opens on 11 April 2013.

Tivoli has managed to keep ‘Project More Rides’ under wraps, but now the plans for 2013 are revealed. The new area inspired by Tycho Brahe will cover a total of 1200 m2, of which 600 m2 are a completely new addition. The cost of transforming and extending the Merry Corner will run into tens of millions of Danish kroner.

New daredevil ride
In the area otherwise containing small Renaissance-inspired Copenhagen houses, the wildest new amusement ride of the year is now being erected.On board giant eagles, visitors will be treated to a ride at breakneck speed as centrifugal forces of 4G are unleashed. At a height of 10 metres plus, depending on the pre-programming of the ride, riders will get the feeling of experiencing the world upside down – more so than in any other ride ever seen in Denmark. The ride, which is already found on Coney Island in New York, in North Korea and in Portugal, is being specially designed for Tivoli in Copenhagen. It will be fun, but be sure to fasten your seatbelt, as the chills and thrills of the centrifugal-force rotations will make you laugh and scream.


Two other new attractions in 2013
The second new ride next year will be an 8-metre high drop tower where children are taken up in an aircraft before being sent plummeting down at high speed. The theme is inspired by the time of Tycho Brahe, i.e. the 16th Century, when people fantasied about aircraft capable of transporting them to Saturn’s rings.
For the third new ride, the Little Pilot, a classic Tivoli amusement, will be rebuilt and redesigned into an interactive flying merry-go-round 4 metres up in the air allowing younger children to operate a joystick to control their height during the ride. The focus of the theme is man’s dream of flying and of journeying into space.

Lars Liebst, Tivoli’s CEO, says, “The last time Tivoli got a new major attraction was in 2009 when Vertigo flew into the Gardens at 100 km/h. Since then, we have added new experiences to a number of existing rides, but we think now is the time to improve our portfolio with brand new attractions. The new ride for teenagers is an exciting addition because it is both fun and wild, but also unique because there are very few like it in the world. Also, we are proud to be able to offer new experiences for both children and tourists who, we hope, may also learn something from becoming acquainted with Old Copenhagen, Tycho Brahe and his universe.”

There is also excitement at Wonderful Copenhagen, the official tourist organisation of Copenhagen: Lars Bernhard Jørgensen, CEO, Wonderful Copenhagen says, ”It is great news that visitors to Copenhagen will now be offered more space and more attractions in Tivoli. And this at one of the very best addresses in the city. This unique Danish amusement park has always been able to create surprises and to offer unexpected, exotic experiences from the Orient and Asia, including the Russian Christmas theme last year. Tivoli in Copenhagen now takes it to the next level, using the planets, stars and galaxies and the Danish astronomer Tycho Brahe to inspire and thrill local citizens and the many visitors to Copenhagen. Tivoli once again proves its vision and its openness to the world.”

About Tivoli:
Since Georg Carstensen opened the gates of Tivoli in Copenhagen to visitors in 1843, the Gardens have become a top amusement park featuring the Tivoli Boys Guard, 26 rides, playgrounds, booths, restaurants, special days and concerts. At 169 years of age, Tivoli is among the world’s oldest amusement parks, and its traditions and constant improvements make it a popular excursion spot for many visitors. Tivoli has about 4 million visitors every year, and 2010 saw the opening of the Tivoli Hotel, the first theme hotel in Copenhagen.

Joe Kleimanhttp://wwww.themedreality.com
Raised in San Diego on theme parks, zoos, and IMAX films, InPark's Senior Correspondent Joe Kleiman would expand his childhood loves into two decades as a projectionist and theater director within the giant screen industry. In addition to his work in commercial and museum operations, Joe has volunteered his time to animal husbandry at leading facilities in California and Texas and has played a leading management role for a number of performing arts companies. Joe previously served as News Editor and has remained a contributing author to InPark Magazine since 2011. HIs writing has also appeared in Sound & Communications, LF Examiner, Jim Hill Media, The Planetarian, Behind the Thrills, and MiceChat His blog, ThemedReality.com takes an unconventional look at the attractions industry. Follow on twitter @ThemesRenewed Joe lives in Sacramento, California with his wife, dog, and a ghost.
Share
Facebook
Twitter
Linkedin
Email
Print
WhatsApp
Pinterest
ReddIt
Tumblr
Previous articleAlcorn McBride Controls the Scares at Eli Roth’s Goretorium
Next articleTheme park experts enrich Hollywood: The Producers Group LLC takes on Killer Karaoke