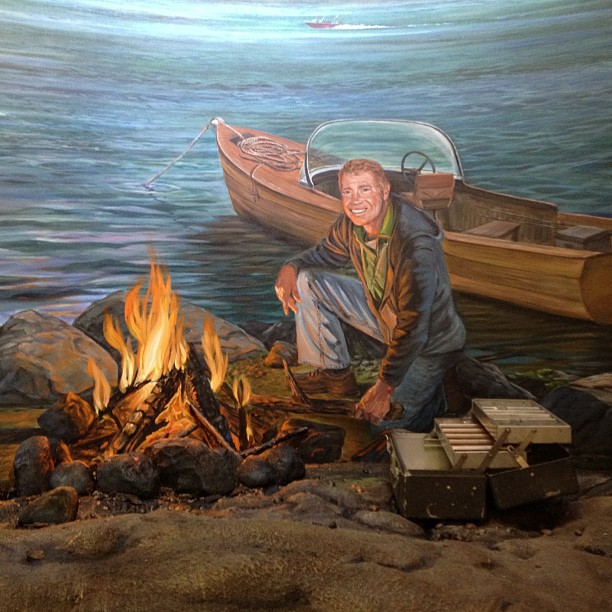 An avid angler, Luhr Jensen Sr. made fishing lures in his home workshop before launching the company in 1932.  The firm rapidly expanded and remained family owned until 2005.  Son Phil Jensen has long been active with The History Museum and has served as a board member and benefactor.

The new gallery features a 22-foot long mural, three video screens displaying vintage Luhr Jensen photos and other media, and a display of fishing rods, lures, spinners and other fishing gear and equipment manufactured by the company.

Visitors trigger motion sensors that launch the audio and video components of the gallery taking them on timed walk-through of the company’s history, from Jensen’s first lures to the company’s growth and innovation.

“The room is fairly small but has a lot going on,” notes Vinnie Cavarra, owner of Media Matrix Productions who served as sound and video designer and integrator.  “There are eight or nine zones in the gallery from the large mural with its corresponding sounds to a factory exhibit and small theater in a rowboat where visitors can see what’s going on underwater.”

Cavarra selected Alcorn McBride DVM8400HDs to supply video to the exhibits.  The AM4-EA Digital Audio Machines deliver ambient and background audio to the space.  The DMX Machine controls lighting levels in the gallery, while the V4 Pro controller automates the entire system, kicking off the AV presentations and interactively guiding visitors through the exhibition.

“I’ve been using Alcorn McBride equipment since 2000 and knew it would perform reliably in this new gallery,” Cavarra says.  “In addition, Alcorn McBride’s customer service and support are extraordinary.  They’re wonderful people to talk to and help me through any questions that come up.”

The exhibit designers for The Luhr Jensen & Sons Gallery were Larry Watson and Peggy O’Neal of Ko-Kwow Arts and Exhibits, North Bend, Oregon.

Joe Kleimanhttp://wwww.themedreality.com
Raised in San Diego on theme parks, zoos, and IMAX films, InPark's Senior Correspondent Joe Kleiman would expand his childhood loves into two decades as a projectionist and theater director within the giant screen industry. In addition to his work in commercial and museum operations, Joe has volunteered his time to animal husbandry at leading facilities in California and Texas and has played a leading management role for a number of performing arts companies. Joe previously served as News Editor and has remained a contributing author to InPark Magazine since 2011. HIs writing has also appeared in Sound & Communications, LF Examiner, Jim Hill Media, The Planetarian, Behind the Thrills, and MiceChat His blog, ThemedReality.com takes an unconventional look at the attractions industry. Follow on twitter @ThemesRenewed Joe lives in Sacramento, California with his wife, dog, and a ghost.
Share
Facebook
Twitter
Linkedin
Email
Print
WhatsApp
Pinterest
ReddIt
Tumblr
Previous articleTEA Hosting Behind-the-Scenes Look at Revitalization of Downtown Las Vegas
Next articleCairo Greets “Ahlan wa Sahlan” to KidZania’s 15th Global Location