ECA2: All eyes on Lanzhou 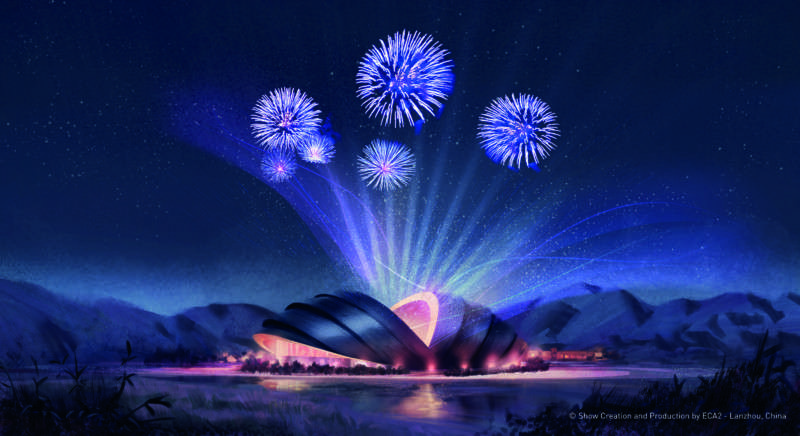 ECA2 prepares to unveil its newest spectacular in China, in summer 2019 interviews

Who is your client for this new show in Lanzhou?

Julien Causeret: We are working with Gansu Xirong Cultural Tourism Development Co., Ltd. to create a new spectacular. They are a public agency of cultural and tourism promotion.

How did they find ECA2?

Julien: The client was familiar with ECA2 because of our 30+ year track record of working in China. They had seen a number of our multimedia shows. Most recently, they saw “Eastern Sunrise” in Rizhao, Shandong province when it opened during the summer of 2016, after which they contacted ECA2 and began discussions on how to bring our expertise to Lanzhou.

What was your client’s direction for this show?

Jean-Christophe Canizares: Lanzhou is a key hub on the Silk Road, a place where many different civilizations stopped in the course of their journey through. It is located in the north of China, not far from the Gobi Desert, in Gansu province. The client wanted to develop a show that was, naturally, locally oriented but with universal meaning. Since they were familiar with our work in China and elsewhere in Asia, they were aware that our team can develop a full experience around Chinese stories and traditions thanks to our international vision and language.

Tell us about the physical setting for the show.

Jean-Christophe: Regarding the show environment and design, first we had to study the climate and weather conditions. Lanzhou has quite significant temperature fluctuations throughout the year, with very cold winters and very hot summers. Since the client had only seen our outdoor shows they wanted us to develop the same kind of experience but in a more protected environment. Even though a fully indoor experience could have also worked, our collaboration with the client resulted in a semi-indoor, semi-outdoor approach which pleased them a lot!

What is the iconic element of this show?

Chengcheng Chi: The theater itself! The architecture, the building’s shape and the scenography are definitely what makes this project iconic.

Our idea was to create a dome that would have an open sky in the center to meet this semi-indoor, semi-outdoor requirement. On one side the audience area is covered, on the other side the main show sets (and focus of the multimedia performance) are covered. The space in the center creates this semi-open-air theater, but there is an additional hole strategically placed over the stage that allows us create a prime location for water, lighting and laser effects, along with what will be the largest permanent cascade screen® that we’ve entirely manufactured.

Tell us about the show’s storyline.

Olivier Ferracci: This show will take audiences on a fantastic journey through a cosmological narrative of China, describing the creation of the universe by an original god named Pan-Gu. It will be divided into two major parts. The first half will focus on how Pan-Gu had to find a perfect balance between earth and sky while creating the universe. The second half will explore how Pan-Gu transformed his body at the end of his life to create some of the major elements that compose today’s world: wind, clouds, thunder, sun, moon, rain, stars, mountains, rivers, plants, trees, metals, stones and rocks.

Tell us about the technology and how it will bring out the story.

Jean-Christophe: We’re telling a unique story with a unique and appropriate combination of technologies, on quite a large scale. ECA2 is known for using all types of multimedia technologies: water effects, light, sound, laser, pyrotechnics, video and more! I believe this new show will host the largest 3D video mapping that we’ve ever done for a permanent installation (approx. 2800 square meters).

We focus on innovation by customizing existing technologies and sometimes by manufacturing new prototypes for the needs of each show.

As mentioned, we will also install a cascade screen® at the edge of the building’s roof and its scale will really be remarkable. During the Yeosu International Expo in 2012 in South Korea, we introduced the world’s first permanent cascade screen® with the Big-O Show that is still running today. The shape of this water screen is oval and its size is 30m x 25m. Here in Lanzhou, it will be a rectangular screen of 40m x 24m. We took inspiration from the Big-O Show in South Korea by pairing the cascade screen® with video mapping in the background. I expect it to be one of the biggest strengths of this show because we will create different layers of video on a very large stage.

It will be state-of-the-art, yet timeless.

How far along is construction?

Julien: When finished, the construction will have lasted for about a year. As of April 2019, 80% of the construction was completed. We are expecting the show to open between July and September, depending on the climate and weather conditions to finalize the last step of construction and production.

What other shows is ECA2 currently working on?

Julien: Currently we are also working on a highly immersive indoor multimedia show in China. There are also other big developments that are confidential for the time being, in the Middle East and Southeast Asia.

ECA2’s shows have a distinctive and recognizable feel to them. While I have only personally seen a small portion of their impressive portfolio, a few come to mind when thinking of their most memorable experiences. Here, in chronological order, are some of ECA2’s greatest hits. Many have been recognized with TEA Thea Awards, by the Themed Entertainment Association.

Videos and photos of Paris’ iconic Eiffel Tower awash in sparkling lights and fireworks circulated around the globe shortly after the end of the 20th century. While the spectacle was best experienced live, nearly everyone alive at that time will remember those images as representative of the start of the new millennium.

Directed by Yves Pépin, BraviSEAmo used Tokyo DisneySea’s beautiful harbor and volcanic mountain backdrop to tell the ancient story of the Fire Spirit and Water Spirit. Naturally, both fire and water factor prominently into the show, which utilized several barges and a giant mechanical structure that arose out of the water nightly.

Built into the harbor, the successful Songs of the Sea was re-imagined into a new show in 2014: Wings of Time. Both shows have taken advantage of ECA2’s core skillset of projection, lasers, pyrotechnics and music to tell culturally relevant stories, all while battling the corrosive effects of the ocean.

Originally designed for the 2012 World’s Fair in Yeosu, the show’s iconic “O” structure served as both a rig for fountain, lighting and pyro effects, as well as a giant water screen for projected images. The show still plays regularly, even though the Expo ended years ago.

This permanent show in Wuyishan seats audience members under a giant cantilevered roof facing a small mountain stage (in front of the very real and beautiful Wuyishan mountains) that is bathed in projection mapping, pyrotechnics, and millions of gallons of water, which cascade from nearly every corner of the theater. The audience becomes part of the show when water fountains eventually cascade up the stairs of the theater and surround the audience with flowing water.

Located in the Eastern seaside town of Rizhao, Eastern Sunrise builds on the town’s ancient fable of being the first to see the rising sun each morning. A line of eight stylized sails rise out of the water. They serve as projection surfaces, but additional water screens located around the stage allow animated characters to move forward, backward and across the set with ease. New pump and fountain technologies allow for a wide array of water effects, which are punctuated by ample amounts of pyro and fireworks. •

Joe Kleimanhttp://wwww.themedreality.com
Raised in San Diego on theme parks, zoos, and IMAX films, InPark's Senior Correspondent Joe Kleiman would expand his childhood loves into two decades as a projectionist and theater director within the giant screen industry. In addition to his work in commercial and museum operations, Joe has volunteered his time to animal husbandry at leading facilities in California and Texas and has played a leading management role for a number of performing arts companies. Joe previously served as News Editor and has remained a contributing author to InPark Magazine since 2011. HIs writing has also appeared in Sound & Communications, LF Examiner, Jim Hill Media, The Planetarian, Behind the Thrills, and MiceChat His blog, ThemedReality.com takes an unconventional look at the attractions industry. Follow on twitter @ThemesRenewed Joe lives in Sacramento, California with his wife, dog, and a ghost.
Share
Facebook
Twitter
Linkedin
Email
Print
WhatsApp
Pinterest
ReddIt
Tumblr
Previous articleSpitz fulldome release: Birth of Planet Earth
Next articleBarco: Beyond AV control