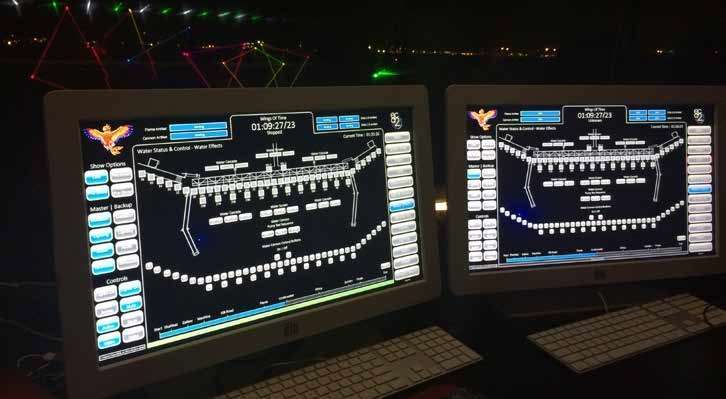 Show control systems, simply defined, automate and coordinate disparate technologies for the purpose of telling stories. In the past, these technology functions were managed by hand, following careful scripts and cues. Depending on an operator to get every cue and signal correct, and simultaneously manage multiple technologies, gets very challenging as the complexity of the stories increases.

Simple stories might include synchronizing lighting and special effects with audio and video, as in a 4D theater. More complex applications such as theme park attractions, live concerts or parades use show control to automate audio, video, lighting, animatronics, special effects, fountains, and lasers, all coordinated with GPS or RFID triggers. From simple to complex, show control technology is based around some relatively straightforward ingredients that, when combined in the right mix, are a recipe for storytelling magic.

AV control systems typically include the basic functions of the devices they control, simplifying a half dozen control devices down to a few pages on a touch screen. Beyond that, they can use macros or presets to simplify multi-step functions. Whereas show control takes the notions of device control, macros, and presets, and takes them to the next level, adding in synchronization and interactivity. The result allows the lighting looks and special effects to execute at exactly the right time, in the proper sequence with audio or video media every time, without a dedicated operator pressing the “go” button.

This consistent experience is absolutely essential when the same show has to execute dozens or hundreds of times a day as, for example, scenes in theme park attractions. Today, shows of large scope, having a great many cues within them and rapidly unfolding action, will be challenging for a single operator, or even a team of operators to run with consistency.

There is still a place for human operators within the show control landscape, especially for live shows where human or animal performers can affect timing. Show control simplifies these complex operational systems by making it possible to manage a large amount of equipment from a single interface.

Show control enables effects and sequences – and accompanying safeguards and contingencies – that wouldn’t otherwise be possible, such as the action of a show happening ultra fast, beyond what a human operator could react to. For example, if a character is highlighted by a flash of light when a high-speed stage lift reaches the top, but a safety fault on the lift causes it to stop, the flash of light would highlight the hole in the stage. The show control system notices the fault and reacts by triggering a different lighting cue in time with the music, directing the audience’s attention elsewhere on stage. Show control allows contingencies to be scripted so even if the show isn’t going as planned, the audience would never notice.

Knowing the status of the devices in your system is important, especially for unattended operation. Show control systems periodically poll connected devices for status information and update an internal list of the current state of everything they are managing. This information can be used to trigger actions such as sending an e-mail, updating a graphical object on an operator interface, or switching to a backup video source. Automation is made possible by the bi-directional and real-time nature of the device drivers.

Technologies from different disciplines sometimes affect one another and must be closely coordinated, and that can be challenging when the tools for managing each type of system are in the hands of many operators. Show control systems are often used to “translate” from one type of control to another to make cross-departmental cooperation easier. When live events are captured by camera operators, the lighting must be consistent, and LED video elements have a tendency of being too bright for the cameras. The video director works with the lighting team to balance the lighting for the cameras. A show control system can listen to the data transmitted by the lighting console and translate that information into brightness control commands for the LED processors. This enables the technician at the lighting console to balance the brightness of the LED wall for the cameras, just as she does with the lights.

A wide variety of applications benefit from show control, such as:

The common denominator is storytelling with technology. Wherever there is a story that technology is helping to tell, you’ll typically find some form of show control technology coordinating it behind the scenes.

Show control systems are also used for basic tasks, such as turning on and off interactive kiosk PCs, resetting Power Over Ethernet switch ports to reboot network cameras, automatically transferring media to a backup players from network attached storage devices, or generating log files. Most systems are programmed to automate the daily startup or shutdown sequence for the equipment.

In evaluating show control options for your project, here are some important considerations:

• What are the main functions required by the system? This goes beyond simple device control. Will protocol translation be used? Is there a requirement of synchronization or automated show branching?

• Who will be operating the system? Are they trained technicians or untrained docents? Decisions about how to create user interfaces depend on the type of users the system will have.

• What kind of tasks will users need to use the system to perform? Are these tasks outcome driven or simple device commands?

There are no trade organizations dedicated to show control, though show control professionals can be found within the ranks of the Themed Entertainment Association, IATSE, IAAPA, and InfoComm.

Those passionate about show control best practices are in good company. Each year during the InfoComm trade show in June, a show control “Geek Out” event featuring show control case studies is organized by John Huntington, professor of Entertainment Technology at New York City College of Technology and Jim Janninck, owner of Timberspring, Inc., a control systems design and engineering firm based in Orlando. At the Geek Out, presenters show their industry peers the interesting show control applications they have worked on and discuss the challenges they faced and how they used show control technology to solve them. The event is enthusiastically well-attended so that members of the show control community can learn from one another.

The pro AV industry continues to push the boundaries of show control as the emphasis on end user experience becomes more and more important. Nowadays, show control systems are highly robust and are the brains behind nearly all consumer-centric experiences that involve lighting, sound, movement and storytelling. This is certain to continue as technology evolves and adapts to the demands of an experience-centric culture. • • •

Eric Cantrell has been telling stories with AV technology his entire career. Starting off in stage management and lighting for live theatre, Eric discovered show control technology working on cruise ships. Bringing together audio, video, lighting, and special effects with the secret sauce – timing – is what attracted him to show control, ultimately landing him his current position as Product Manager for the Medialon show control product line at Barco. He is an active participant in #AVinTheAM industry discussions Sunday mornings on Twitter.

Joe Kleimanhttp://wwww.themedreality.com
Raised in San Diego on theme parks, zoos, and IMAX films, InPark's Senior Correspondent Joe Kleiman would expand his childhood loves into two decades as a projectionist and theater director within the giant screen industry. In addition to his work in commercial and museum operations, Joe has volunteered his time to animal husbandry at leading facilities in California and Texas and has played a leading management role for a number of performing arts companies. Joe previously served as News Editor and has remained a contributing author to InPark Magazine since 2011. HIs writing has also appeared in Sound & Communications, LF Examiner, Jim Hill Media, The Planetarian, Behind the Thrills, and MiceChat His blog, ThemedReality.com takes an unconventional look at the attractions industry. Follow on twitter @ThemesRenewed Joe lives in Sacramento, California with his wife, dog, and a ghost.
Share
Facebook
Twitter
Linkedin
Email
Print
WhatsApp
Pinterest
ReddIt
Tumblr
Previous articleECA2: All eyes on Lanzhou
Next articleGantom and Techni-lux: Lighting Jokers