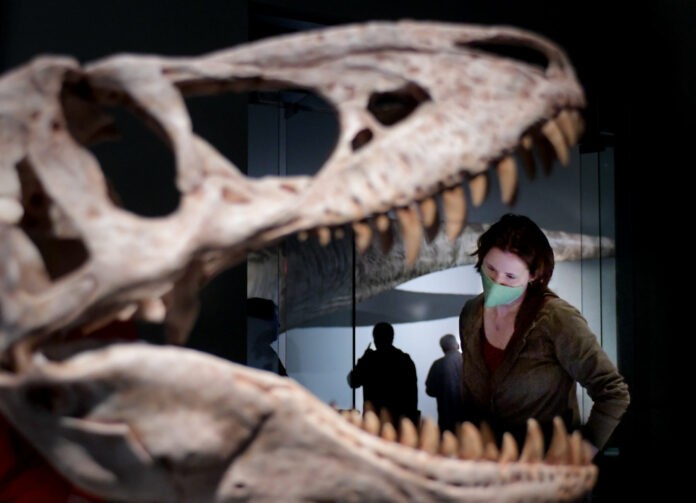 Ferocious, feathered and for the first time on the road, “T. rex: The Ultimate Predator,” debuted on its worldwide tour at the Peoria Riverfront Museum on May 29. The exhibition, arriving from its creator, the American Museum of Natural History in New York City, presents an entire family of completely redesigned Tyrannosaurus rex, with two full-sized adults, all based on the latest findings, including plumage.

“How exciting! For the first time, Peoria is the launching point for a major international traveling exhibition tour and with one of the most popular museum subjects of all-time researched by the same museum that discovered the T. rex. ‘The Summer of T. rex’ at the museum is one of the cultural experiences young and old will recall for a lifetime,” said Peoria Riverfront Museum President & CEO John Morris.

Full-scale feathered models of the world’s most iconic dinosaur will be on display, from a hatchling that resembles a fluffy turkey poult to a feather-covered fledging to a city-bus-sized adult T. rex with feather patches. While the mega-predator is capable of crushing prey with a 7,800-pound bite force, research finds that it is also very smart, sensitive and family centric.

“In the last 30 years, we’ve seen a huge increase in both the number of tyrannosaur fossil discoveries as well as the availability of technology that lets us explore complex questions about these charismatic animals,” said paleontologist Mark Norell, PhD, division chair and Macaulay Curator of the American Museum of Natural History. “I never would have imagined that one day we’d be able to look at the shape of T. rex’s brain, analyze the tiny daily growth lines on their massive teeth to determine how quickly they put on weight, or use advanced biomechanical modeling to figure out the force of its bite.”

Along with T. rex, the exhibition showcases other full-size tyrannosaurs, including the earliest, the Proceratosaurus bradleyi, and Dilong paradoxus with fossilized feathers, discovered in China by Norell and his colleagues.

The exhibition’s interactive features give visitors of all ages many options for fun encounters, such as the “roar mixer” that uses selected animal sounds to recreate a T. rex roar, a shadow theater that projects onto an adult T. rex skeleton making it come to life, and a life-sized animation of T. rex that responds to visitors’ movements in its Cretaceous environment.

(For the record, T. rex arrived during the late Cretaceous period, millions of years after the Jurassic period, made famous by the movie series, which we’ll be showing on the giant screen.)

Peoria Riverfront Museum features a “Summer of T. rex” programming that takes T. rex into the rest of the museum with Giant Screen Theater dinosaur films, including the full Jurassic Park series and the immersive documentary Walking with Dinosaurs, a special live planetarium show, a Dino Lab makers space open Saturdays, an art contest, a live lecture series and more.

Look out for Rexy, the museum’s special fledgling (human-sized) ambassador, who will take the story of T. rex into the Central Illinois community.

“T. rex: The Ultimate Predator” exhibition runs from May 29 through Sept. 6. For more information about the exhibition, visit RiverfrontMuseum.org.