An eruption of accolades: Universal’s Volcano Bay honored with a TEA Thea Award 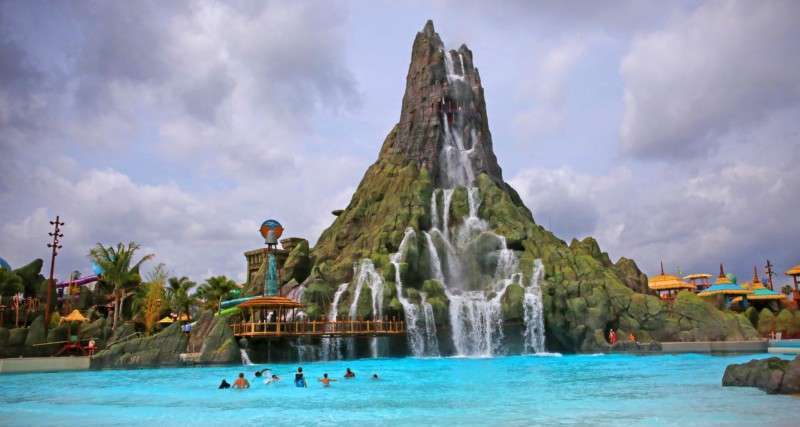 On May 25, 2017, Universal Orlando Resort’s third theme park, Volcano Bay, welcomed its first public guests. The park has since been acclaimed by fans and professionals within the themed entertainment industry, and was named to receive a TEA Thea Award from the Themed Entertainment Association. In connection with the Thea Award, Volcano Bay will also be the subject of a Thea Case Studies presentation during the annual TEA Summit. The Summit takes place April 11-12 and is followed on April 13 with the 25th Annual TEA Thea Awards Gala, presented by Chimelong. The big weekend of events takes place in Anaheim, California, at Disneyland Resort.

An official statement from the TEA Thea Awards Committee reads, “The entire park beckons with the promise of escape, relaxation and adventure and lives up to the belief that ‘Water is Life and Life is Joy.’ Volcano Bay raises the bar for waterparks in general, with a highly-themed environment and a fun, festive and relaxing atmosphere.”

The addition of Volcano Bay in 2017 was significant not just for NBCUniversal, but as part of the continuing evolution of the Central Florida tourism corridor.

Volcano Bay is a large property, coming in at about 53 acres. The park has four zones: Krakatau (the volcano, rising 200 feet into the Orlando skyline), Wave Village, River Village, and Rainforest Village. Combined, they are home to 18 attractions, ranging from wave pools and lazy rivers to heart-stopping slides and plunges.

The attractions range from kiddie pools with tiny slides and charming interactive elements, to world-class, thrill-seeker slides, including Ko’okiri Body Plunge – a dramatic, 125-foot-drop at 70 degrees (near vertical) from near the top of Krakatau. The towering plunge takes only seconds, as riders zip through an enclosed tube through the heart of the volcano and pass along a clear tunnel in one of the park’s pools near the base of the mountain.

Also geared toward adults, and intertwined with the volcano, are the Kala and Ta Nui Serpentine Body Slides. Like Ko’okiri, these are body slides that feature trap door-style launches, where riders literally have the platform pulled out from under them, sending them plummeting into the tubes below.

Most of the names featured at Volcano Bay are Polynesian, such as the Kopiko Wai Winding River, Taniwha Tubes, Ika Moana, and TeAwa – The Fearless River. A favorite attraction at Volcano Bay is the Krakatau Aqua Coaster, a slide where riders sit behind one another in rafts that have been designed to look like waka taua (Maori war canoes). This unique water coaster doesn’t rely solely on gravity, but rather, linear induction (magnetics) to propel each raft very rapidly up steep hills before sending them careening down another drop or through a series of banked turns within the volcano itself.

Volcano Bay has an abundance of food and drink in every section of the park. The park has two featured bars – Dancing Dragons, and the Kunuku Boat Bar.

Throughout the park are cabanas for rent. Each cabana comes with its own TapuTapu kiosk, from which guests can reserve their rides while relaxing in the shade. There are also lounges and chairs available on the beaches and elsewhere.

One of the pioneering aspects of Volcano Bay is that the park features “virtual queues” for its attractions. Upon entering the park, each guest is given their own TapuTapu wearable band. They walk up to an attraction entrance and put themselves into a virtual queue by “tapping in” at the kiosk with their TapuTapu. A message is received on their TapuTapu LCD display telling them how long their wait is going to be; the band vibrates to remind them when it’s time to return.

TapuTapu also streamlines the process of purchasing food, beverages, and merchandise throughout the park, as well as rental locker operation. There are also interactive elements that guests “Taptu Play” throughout the park that trigger water fountains, special effects, and even a selfie station. • • •

Rick West ([email protected]) is Creative Director of Midsummer Scream – the world’s largest Halloween and horror convention, and themed entertainment industry show writer/creative director who has worked for such companies as Thinkwell, BRC Imagination Arts, The Hettema Group, IdeAttack, and The Producers Group. Rick is also a frequent contributor to InPark Magazine.

Joe Kleimanhttp://wwww.themedreality.com
Raised in San Diego on theme parks, zoos, and IMAX films, InPark's Senior Correspondent Joe Kleiman would expand his childhood loves into two decades as a projectionist and theater director within the giant screen industry. In addition to his work in commercial and museum operations, Joe has volunteered his time to animal husbandry at leading facilities in California and Texas and has played a leading management role for a number of performing arts companies. Joe previously served as News Editor and has remained a contributing author to InPark Magazine since 2011. HIs writing has also appeared in Sound & Communications, LF Examiner, Jim Hill Media, The Planetarian, Behind the Thrills, and MiceChat His blog, ThemedReality.com takes an unconventional look at the attractions industry. Follow on twitter @ThemesRenewed Joe lives in Sacramento, California with his wife, dog, and a ghost.
Share
Facebook
Twitter
Linkedin
Email
Print
WhatsApp
Pinterest
ReddIt
Tumblr
Previous article
Global gaze: Asian attractions dominate the 2019 TEA Thea Awards
Next article
Andrew O’Rourke: Google THIS