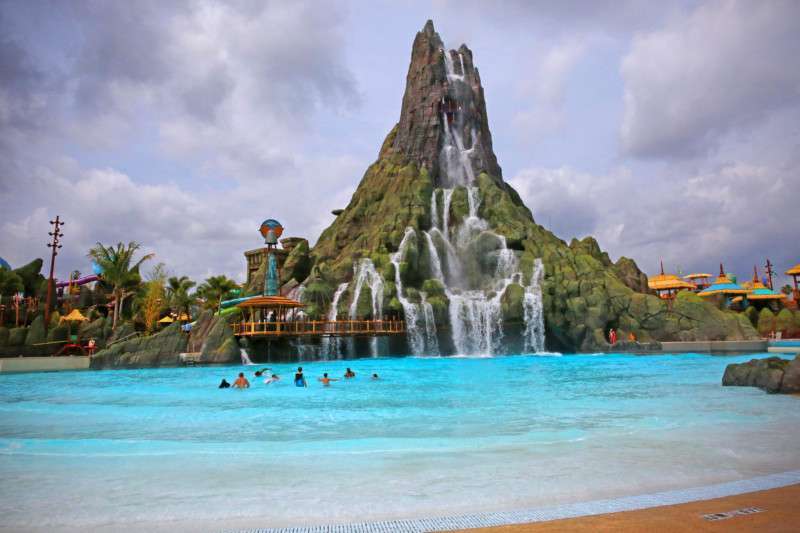 Universal thinks outside the waterpark with Volcano Bay

In the mature North American market, it’s a rare and momentous occasion for a major new theme park to open, and we were happy to have contributing writer Rick West on the spot May 25, 2017, as Volcano Bay at Universal Orlando Resort welcomed its first public guests.

The creation of Volcano Bay is significant not just for NBCUniversal, but as part of the continuing evolution of the Central Florida tourism corridor. The park was designed with its own backstory and lore, steeped in New Zealand themes.

The legend of Volcano Bay

The Legend of Volcano Bay says that long ago, an ancient people known as the “Waturi” crossed the oceans, in search of a giant golden fish – known as “Kunuku” – to guide them to a new island paradise. Of course, that paradise was Volcano Bay. In the course of the journey, the Waturi were influenced by many different cultures, developing the warmth and friendliness that characterize Volcano Bay, and the philosophy, “Water is life. Life is joy.” Throughout the park, guests are greeted with the Maori greeting “kia ora,” which offers wishes for good health.

Lay of the land

Volcano Bay is a large property, coming in at about 53 acres. In comparison, Typhoon Lagoon at Walt Disney World is 56 acres. Waterworld in Northern California is 30 acres, and Raging Waters in San Dimas is 50 acres. Volcano Bay is roughly four times the size of Six Flags Hurricane Harbor in Valencia, and of Knott’s Soak City in Buena Park.

The park has four zones: Krakatau (the volcano, rising 200 feet into the Orlando skyline), Wave Village, River Village, and Rainforest Village. Combined, they are home to 18 attractions, ranging from wave pools and lazy rivers to heart-stopping slides and plunges.

The attractions range from kiddie pools with tiny slides and charming interactive elements, to world-class, thrillseeker slides, including Ko’okiri Body Plunge – a dramatic, 125-foot-drop at 70 degrees (near vertical) from near the top of Krakatau. The towering plunge takes only seconds, as riders zip through an enclosed tube through the heart of the volcano and pass along a clear tunnel in one of the park’s pools near the base of the mountain.

Also geared toward adults, and intertwined with the volcano, are the Kala and Ta Nui Serpentine Body Slides. Like Ko’okiri, these are body slides that feature trap doorstyle launches, where riders literally have the platform pulled out from under them, sending them plummeting into the tubes below. The moment is accented by the sound of pounding drums getting louder and louder until the floor drops out, and all you hear is the rush of water and your own screams as you disappear into the darkness.

The trek up the volcano is a visual delight. The views from the slide launch area are stunning, looking out across Volcano Bay and beyond, with wind blasting spray from the waterfalls over the platform and riders waiting their turn. It’s an intense moment, adding to the awe and adrenaline rush as guests watch those before them drop from the enclosed launch tubes.

Most of the names featured at Volcano Bay are Polynesian, such as the Kopiko Wai Winding River, Taniwha Tubes, Ika Moana, and TeAwa – The Fearless River. Color proved an excellent shorthand when we couldn’t always recall (or pronounce) the Polynesian, as in, “She rode that green one in the volcano!” or, “We rode that yellow one with the rafts.”

Our favorite attraction at Volcano Bay is the Krakatau Aqua Coaster, a slide where riders sit behind one another in rafts that have been designed to look like waka taua (Maori war canoes). This unique water coaster doesn’t rely solely on gravity, but rather, linear induction (magnetics) to propel each raft very rapidly up steep hills before sending them careening down another drop or through a series of banked turns within the volcano itself. We found the ride experience both new and extremely exciting, and it appears to have quickly become a guest favorite.

Volcano Bay has an abundance of food and drink in every section of the park. The park has two featured bars – Dancing Dragons, and the Kunuku Boat Bar. There is a delightful specialty beer guests will enjoy: Volcano Blossom, a custom brew for Universal.

Throughout the park are cabanas for rent. With your private cabana rental, you get a secure place to store your things, a personal server for food and drink, and great views of the park, if you happen to get an upstairs space. Each cabana comes with its own TapuTapu kiosk, from which guests can reserve their rides while relaxing in the shade.

There are also lounges and chairs available on the beaches and elsewhere. We never had a hard time finding a place to sit, and just about every beach or seating area has fine views of Krakatau and other park features.

One of the biggest cornerstone ideas of Volcano Bay is that the park features “virtual queues” for its attractions. Upon entering the park, each guest is given their own TapuTapu wearable band. You walk up to an attraction entrance and put yourself into a virtual queue by “tapping in” at the kiosk with your TapuTapu. You receive a message on your TapuTapu LCD display telling you how long your wait is going to be, and the band vibrates to remind you when it’s time to return.

TapuTapu doesn’t completely eliminate waiting or queuing, due to such factors as normal dispatch intervals and operational factors, how full the park is on a given day, and how much time remains before closing when a guest tries to reserve a spot in a virtual queue.

TapuTapu also streamlines the process of purchasing food, beverages, and merchandise throughout the park, as well as rental locker operation. There are also interactive elements that guests “Taptu Play” throughout the park that trigger water fountains, special effects, and even a selfie station.

Universal has branded this third gate as its newest “theme park,” raising immediate debate from all corners on whether it is a theme park or a waterpark.

It’s a gated property with an entry fee, just like most other theme parks. And the park tells a story; a central story idea that is executed throughout the park, and that you experience throughout your visit. The structures and settings are themed in detail throughout the park, setting the specific tropical tone and playing into the backstory. Each attraction has a themed name and its own given lore. There are food, beverage, and merchandise locations throughout, all geared toward the theme and overall experience.

Theme parks are for families, and just about every attraction in Volcano Bay is family-friendly. Volcano Bay is planned to be a year-round park, and waterparks have traditionally been seasonal… but we have seen, as the industry matures and expands, numerous strategies to extend the operating season of a property.

It’s true that all the attractions at Volcano Bay are waterbased. The rides aren’t rides – they’re slides. But must a theme park be defined by an arsenal of iron attractions or dark rides?

I imagine we can all agree that Volcano Bay is much more than a waterpark, even if you can’t bring yourself to define it as a theme park. In the end, it’s a gorgeous property, regardless of how fans or professionals want to classify it. It’s fun, it’s thrilling, it’s relaxing, and it’s something we will do again.

Universal has created something very special that takes them to the next level on the Orlando playing field. From the designers to management, construction crews to maintenance folks, from lifeguards and ride operators, to the bartenders and the ticketing team, everyone should be extremely proud – Volcano Bay is here, and it is beautiful! Kia ora, everyone! •

Joe Kleimanhttp://wwww.themedreality.com
Raised in San Diego on theme parks, zoos, and IMAX films, Joe Kleiman would expand his childhood loves into two decades as a projectionist and theater director within the giant screen industry. In addition to his work in commercial and museum operations, Joe has volunteered his time to animal husbandry at leading facilities in California and Texas and has played a leading management role for a number of performing arts companies. Joe has been News Editor and contributing author to InPark Magazine since 2011. HIs writing has also appeared in Sound & Communications, LF Examiner, Jim Hill Media, and MiceChat. His blog, ThemedReality.com takes an unconventional look at the attractions industry. Follow on twitter @ThemesRenewed Joe lives in Sacramento, California with his fiancé, two dogs, and a ghost.
Share
Facebook
Twitter
Linkedin
Email
Print
WhatsApp
Pinterest
ReddIt
Tumblr
Previous articleInvadR: Down to the last nut and bolt
Next articlePolin new product showcase for fall 2017