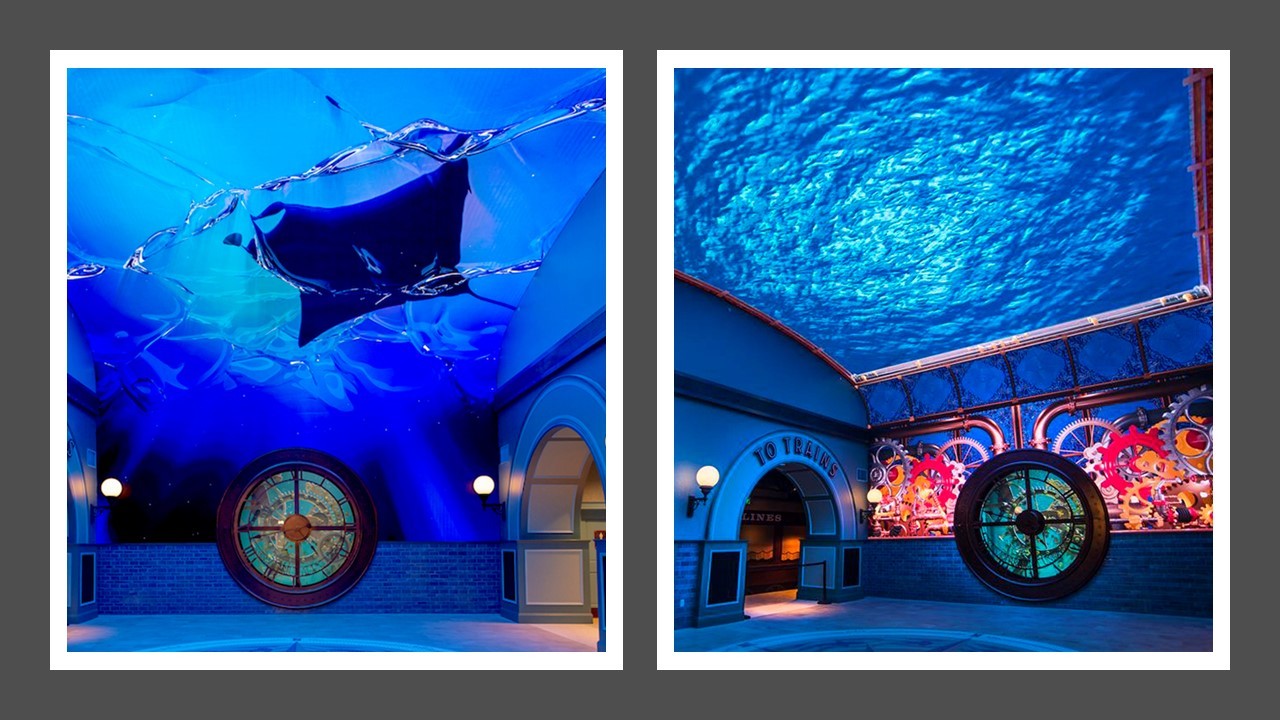 One of America’s newest aquarium is the centerpiece of a $187 million family entertainment attraction in downtown St. Louis.  The Aquarium and other new attractions are housed in the National Historic Landmark train shed at St. Louis Union Station, owned by LHM and its principals, Bob and Steve O’Loughlin. The station originally opened in 1894 as the biggest and busiest train terminal in the nation.

The Entrance Experience recently was named for a Thea Award for Outstanding Achievement from the Themed Entertainment Association (TEA).  It was cited for crossing the threshold into entertainment design in new and unexpected ways.  The Entrance Experience melds fantasy and reality by carefully blending the media art and technology of DE-ŹYN Studios. LED display technology, visual media, an original music score and a masterfully executed virtual train ride attraction, turn-keyed by DE-ŹYN, transports guests into the immersive world of the aquarium.

DE-ŹYN Studios, with offices in Orlando, New York, San Francisco and Vancouver, oversaw the conception and execution of the Entrance Experience working directly with LHM on the creative media work and aquarium designer PGAV Destinations on the careful, undetectable integration of technology into their exquisite design.

The Entrance Experience is displayed on DE-ŹYN’s custom seamless 2.7 mm LED display building blocks, which rise from a clock face-style fish tank window to cover the hall’s barrel vault ceiling with a direction change from side to side to forward/back in DE-ŹYN’s redesign. “We wanted to create a sort of ‘Fantasia’ ballet in the Grand Lobby, a series of three- to five-minute vignettes combining an original music score, sea life, water and natural elements in a very stylized way to immerse visitors in a world of enchantment from the moment they arrive,” says John Miceli, Chief Creative Officer and Founder of DE-ŹYN Studios.

“The immersive visuals float around the fish tank wall and up and overhead and behind and over that massive palette created by the architecture,” he notes.  Whales, dolphins, betta fish, sharks, jellyfish, manta rays, sardines and many other sea creatures bring their special flowing movements, synchronized to the music score, through the space providing a wow moment for guests. An Undersea Station that appears to be 3D to the naked eye, water flow and an incredible journey through the galaxy all play a part in the Entrance Experience, the central element in the room.

“At whatever point a visitor walks into the space, whether they see a whole vignette or just part of one, there’s an endless set of ‘wows’ to dazzle them,” says Miceli.  “There might be a few betta fish in a love story in a black void or the entire space might be transformed into an undersea observatory that’s quite 3D and colorful.  Everything is carefully and artistically done to be simple and elegant and synchronized to the score.”

“We could drive DE-ŹYN’s custom resolution LED videowall with specific and high-resolution content using just one Picturall Pro at very high quality and with repeatability,” notes Brian Smith, Southeast Regional Sales Manager at Analog Way.  “The system also features input cards so if the space is rented out to an event they can plug in external sources and support other content.”

DE-ŹYN has provided aquarium staff with intuitive tablet control of the Entrance Experience.  “We allow the user to set up vignette sequences in the order they choose, or they can manually play something for a special guest,” Miceli explains.

“This was our first time working with Analog Way, and we’re very happy with the results.  We’re pushing a lot of high-resolution content and never want to settle for anything less than perfection,” he notes.

“Analog Way’s support throughout was excellent,” he adds.  “They flew out to the site and were on top of anything we needed to customize or tweak.  They were great!”