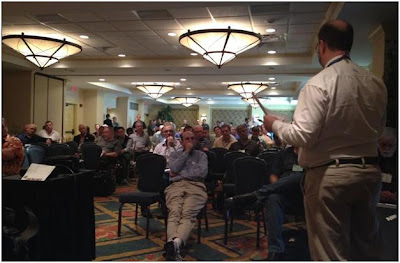 Ft. Lauderdale, FL, USA (March 1, 2012) — ASTM F24, the committee on amusement rides and attractions which produces global safety standards for the amusement industry, held its semi-annual meeting from February 16th-18th in Ft. Lauderdale, Florida. Approximately fifty separate meetings were held, each one focusing on a specific safety element of the amusement industry. Attendance was at an all-time high with over 200 safety experts from around the world participating.
In addition to traditional sessions on issues like ride design, operations, and maintenance, some of the areas discussed included nontraditional areas of growth such as the participatory attractions of zip lines, rock wall climbing, inflatables, Zorbs, and trampolines.  A number of meetings focused on water-related attractions which continue to see ample growth in the resort and hotel industry. A significant amount of work continues to be performed on the subject of trains, which balloted a new standard for the first time.
Jim Seay, Chairman of ASTM F24 Committee and President of Premier Rides, commented, “I was very impressed by the dedication shown by so many people who are both passionate about safety and volunteering their valuable time to participate. As one example of many, the trampoline task group that had proactively been established last year met for two days straight. Compelling input was provided by consumers who had been personally affected in a trampoline incident. The task group’s work effort was remarkable.”
Following up on a growing trend, a number of sessions were held to assist both domestic and global representatives with the adoption of ASTM F24 standards.  The recently passed Canada-specific standard was used as a model for other countries that wish to incorporate internal requirements and existing standards into their adoption of F24 standards. A newly established task group focused on the Latin American adoption of F24 standards met to review the model. Len Morrissey, Director/TCO Division of ASTM International, stated, “With the success of the Canadian and Colombian efforts, we will be reaching out to specific countries in Latin America within the next month to assist with the adoption of F24 standards. We also established a task group to address New Jersey’s desire to harmonize with F24.”
Seay added, “I am extremely pleased with the high level of interest expressed by committee members in the spring 2012 meeting.  I am grateful that participants travelled around the globe to share their passion for safety in the amusement industry.” The meeting was open to all with an interest in safety and a desire to contribute to the industry standards. Global participants represented a large range of countries, including: Singapore, Japan, Hong Kong, China, Canada, the Netherlands, Switzerland, the United Kingdom, and Italy.
The International Association of Amusement Parks & Attractions (IAAPA) collated its biannual Safety Committee Meeting at the same location on February 15th. In addition to IAAPA, the following industry associations had representation at the ASTM F24 Spring Meeting: ACCT, AIMS, IALDA, NAARSO, OABA, and WWA.
The ASTM F24 meetings were sponsored by Great Wolf Lodge, IMPACT, Premier Rides, Proslide Technology, Rockwell Automation, SeaWorld Parks & Entertainment, Tapeswitch, and Uremet.
The next ASTM Committee F24 meeting will be held October 18-20th 2012. The fall meeting’s location and venue will be announced shortly.
ABOUT ASTM COMMITTEE F24
ASTM Committee F24 on Amusement Rides and Devices was formed in 1978. F24 meets twice a year, usually in February and October, typically with over 150 members from around the world attending several days of technical meetings. The Committee, with current membership of over 500 global members, currently has jurisdiction over 17 standards, published in multiple languages in the Annual Book of ASTM Standards, Volume 15.07. These standards continue to play a preeminent role in all safety aspects important to amusement rides and devices.
ABOUT ASTM INTERNATIONAL
ASTM International is one of the largest voluntary standards development organizations in the world and is a trusted source for the technical standards of materials, products, systems, and services. Known for their high technical quality and market relevancy, ASTM International standards have an important role in the information infrastructure that guides design, manufacturing and trade in the global economy. Standards developed at ASTM are the work of over 30,000 ASTM members. These technical experts represent producers, users, consumers, government and academia from over 120 countries. Participation in ASTM International is open to all with a material interest, anywhere in the world.
Subscribe to InPark for FREE!
Submit your news

Joe Kleimanhttp://wwww.themedreality.com
Raised in San Diego on theme parks, zoos, and IMAX films, Joe Kleiman would expand his childhood loves into two decades as a projectionist and theater director within the giant screen industry. In addition to his work in commercial and museum operations, Joe has volunteered his time to animal husbandry at leading facilities in California and Texas and has played a leading management role for a number of performing arts companies. Joe has been News Editor and contributing author to InPark Magazine since 2011. HIs writing has also appeared in Sound & Communications, LF Examiner, Jim Hill Media, and MiceChat. His blog, ThemedReality.com takes an unconventional look at the attractions industry. Follow on twitter @ThemesRenewed Joe lives in Sacramento, California with his fiancé, two dogs, and a ghost.
Share
Facebook
Twitter
Linkedin
Email
Print
WhatsApp
Pinterest
ReddIt
Tumblr
Previous articleLEGOLAND Calfornia’s Star Wars Miniland Addition Now Bricks Away From Completion
Next articleLowe’s Named Opening Day Sponsor of Six Flags Parks