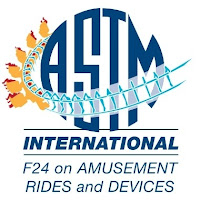 West Conshohocken, PA — ASTM F24, the committee on amusement rides and attractions which produces global safety standards for the amusement industry, will be holding three days of meetings from October 18th through October 20th, 2012 at the Grand Sierra Resort in Reno, Nevada. Approximately fifty separate meetings will be held, each one focusing on a specific safety element of the amusement industry. Upwards of 200 safety experts from all over the world are expected. Meetings are open to both members and non-members of ASTM and registration is available at http://www.astm.org/.

In addition to traditional sessions on issues like ride design, operations, and maintenance, some special areas of focus include nontraditional areas of growth, such as participatory attractions like zip lines, rock wall climbing, inflatables, Zorbs, and trampolines. A number of meetings will also focus on water-related attractions which continue to see ample growth in the resort and hotel industry. A significant amount of work has been performed on the subject of trains, which will also be reviewed in detail.

A number of sessions will again be held to assist global representatives with the adoption of ASTM F24 standards. Representatives of Central and South America as well as Asia have already confirmed participation. The recently passed F24 Canada-specific standard is being used as a model for other countries that have a desire to adopt F24 standards, but have specific internal requirements that must be added to the existing standards. The newly established task group focused on Latin American adoption of F24 will meet to review the model. Len Morrissey, Director/TCO Division of ASTM International, stated, “With the success of the Canadian and Colombian efforts, we now have a clear path that allows any country to adopt F24 standards and still recognize specific national requirements.”

Preregistration for the ASTM F24 Fall 2012 Meeting is strongly encouraged. Additionally, ASTM F24 urges all participants to make room reservations at the Grand Sierra Resort as soon as possible to take advantage of the special group rate, which ends September 30th. A complete list of meeting details can be found at the ASTM website.

Jim Seay, chairman of ASTM F24 Committee and president of Premier Rides, commented, “The best thing about the ASTM meetings is that there is a wide diversity of attendees ranging from the largest operators to regulatory officials to consumer advocates. I am extremely pleased with the high level of interest expressed by committee members in the upcoming fall 2012 meeting. I am grateful that participants will travel from around the globe to share their passion for safety in the amusement industry. As always, the meeting is open to all that have an interest in safety and would like to contribute to the industry standards.”

ABOUT ASTM COMMITTEE F24
ASTM Committee F24 on Amusement Rides and Devices was formed in 1978. F24 meets twice a year, usually in February and October, with over 100 members from around the world attending several days of technical meetings. The Committee, with current membership of over 600 global members, currently has jurisdiction over 17 standards, published in multiple languages in the Annual Book of ASTM Standards, Volume 15.07. These standards continue to play a preeminent role in all safety aspects important to amusement rides and devices.

ABOUT ASTM INTERNATIONAL
ASTM International is one of the largest voluntary standards development organizations in the world and is a trusted source for the technical standards of materials, products, systems, and services. Known for their high technical quality and market relevancy, ASTM International standards have an important role in the information infrastructure that guides design, manufacturing and trade in the global economy. Standards developed at ASTM are the work of over 30,000 ASTM members. These technical experts represent producers, users, consumers, government and academia from over 120 countries. Participation in ASTM International is open to all with a material interest, anywhere in the world.

Joe Kleimanhttp://wwww.themedreality.com
Raised in San Diego on theme parks, zoos, and IMAX films, Joe Kleiman would expand his childhood loves into two decades as a projectionist and theater director within the giant screen industry. In addition to his work in commercial and museum operations, Joe has volunteered his time to animal husbandry at leading facilities in California and Texas and has played a leading management role for a number of performing arts companies. Joe has been News Editor and contributing author to InPark Magazine since 2011. HIs writing has also appeared in Sound & Communications, LF Examiner, Jim Hill Media, and MiceChat. His blog, ThemedReality.com takes an unconventional look at the attractions industry. Follow on twitter @ThemesRenewed Joe lives in Sacramento, California with his fiancé, two dogs, and a ghost.
Share
Facebook
Twitter
Linkedin
Email
Print
WhatsApp
Pinterest
ReddIt
Tumblr
Previous articleLEGOLAND California Previews Final Room Decor
Next articleResorts World Sentosa to Hold Grand Opening Dec 7; Marine Life Park Completes Final Phase of Construction