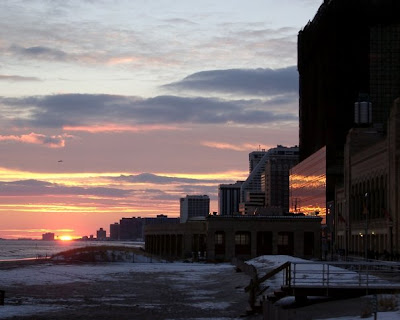 Atlantic City, NJ, USA (April 2, 2012) /PRNewswire/ — The Atlantic City Alliance (ACA) announced today it has assembled its core team, two of whom will be calling Atlantic City “home.” Liza Cartmell, CEO of the ACA, will be joined by Jeff Guaracino as the newly appointed Chief Strategy & Communications Officer, Judi Ludovico as the new Chief Entertainment Officer and Christine Spencer as the new Chief Marketing Officer. The team begins work today.

The Atlantic City Alliance (ACA) is a New Jersey not-for-profit corporation first launched in the fall of 2011 in response to legislation signed by New Jersey Governor Chris Christie. The ACA’s primary mission is to revitalize and rebuild Atlantic City’s reputation and to broaden the destination’s appeal beyond gaming to a multi-night, year-round destination with world-class dining, premier shopping, endless beaches and historic Boardwalk.

Along with the help of newly-hired Guaracino, Ludovico and Spencer, the ACA will work to put in place a large-scale media campaign designed to develop a new brand for Atlantic City as a resort destination, increase visitation among leisure travelers and support the Atlantic City’s revitalization program. Guaracino and Ludovico have also established residency in Atlantic City.

“We are thrilled to have Jeff, Judi and Chris joining our team,” said Liza Cartmell, CEO of the ACA. “After a national search, we have recruited incredible talent to Atlantic City to help us achieve our mission.”

Together, the combined national and international experience among the team will help make a significant impact in the city. The team will be taking the right steps to move the needle on perception of the area while also working in partnership with the Casino Reinvestment Development Authority (CRDA) to support its Atlantic City Tourism District Master Plan, which aims to promote Atlantic City’s appeal as a premier tourist destination.

As Chief Strategy & Communications Officer, Jeff Guaracino will be primarily responsible for overseeing the development of ACA’s strategic plan and communications programs. Additionally, he will be responsible for facilitating communication between the ACA and key partners, local businesses, industry and elected officials. Guaracino comes to the ACA after nearly 11 years at the Greater Philadelphia Tourism Marketing Corporation, six years of which were spent as Vice President of Communications. Named by Philadelphia Business Journal as a “40 Under 40” business leader, Guaracino brings extensive experience in tourism marketing, strategic planning, multicultural marketing, global communications and destination brand development to the ACA. He is the current vice-chair of the International Gay and Lesbian Travel Association (IGLTA) and author of the book Gay and Lesbian Tourism: The Essential Guide for Marketing. Guaracino was raised in New Jersey and graduated from Rowan University.

As Chief Entertainment Officer, Judi Ludovico is responsible for developing a robust portfolio of new and exciting entertainment programs consistent with the marketing program to increase visitation. With a background in marketing, production, and performance, Ludovico has extensive experience developing and promoting large-scale theatrical productions for iconic live entertainment brands. Most recently, she worked as the Special Events producer for Discovery Times Square. She also spent 13 years at Madison Square Garden Entertainment where she worked as the Director of Productions Programming for the Radio City Christmas Spectacular and as the Creator and Executive Producer of the Radio City Rockettes dance events – Rockettes Summer Intensive and The Rockettes Experience. In addition, she produced the first-ever vocal coaching mobile app – Singing for Dancers. Ludovico began her career in entertainment as a performer at the Tropicana in Atlantic City.

Christine Spencer joins the ACA as Chief Marketing Officer. As a former Brand Manager for Philadelphia Newspapers, LLC and Vice President of Marketing and Communications for the National Constitution Center, Spencer is now responsible for overseeing the implementation of the new Atlantic City brand through a broad scale media campaign to include television, radio, outdoor advertising, print and digital activations. In the past, she has collaborated with multiple teams to ensure the success of various marketing projects while also planning, budgeting, implementing and measuring marketing services, programs and projects. Spencer also worked to increase advertising and sales growth for multiple publications in Philadelphia. Guaracino and Spencer worked together previously at The Franklin Institute Science Museum in Philadelphia from 1999-2001.

The ACA is a recently established New Jersey not-for-profit corporation whose primary mission is to develop and implement a full-scale, broad-based, multi-year marketing program for Atlantic City. The ACA will work with the Casino Reinvestment Development Authority (CRDA) to market and promote the Tourism District via a public/private partnership. The ACA also works with local and state government, the private sector and other organizations to further enhance the marketing program.

Joe Kleimanhttp://wwww.themedreality.com
Raised in San Diego on theme parks, zoos, and IMAX films, InPark's Senior Correspondent Joe Kleiman would expand his childhood loves into two decades as a projectionist and theater director within the giant screen industry. In addition to his work in commercial and museum operations, Joe has volunteered his time to animal husbandry at leading facilities in California and Texas and has played a leading management role for a number of performing arts companies. Joe previously served as News Editor and has remained a contributing author to InPark Magazine since 2011. HIs writing has also appeared in Sound & Communications, LF Examiner, Jim Hill Media, The Planetarian, Behind the Thrills, and MiceChat His blog, ThemedReality.com takes an unconventional look at the attractions industry. Follow on twitter @ThemesRenewed Joe lives in Sacramento, California with his wife, dog, and a ghost.
Share
Facebook
Twitter
Linkedin
Email
Print
WhatsApp
Pinterest
ReddIt
Tumblr
Previous articleSony Electronics Partners With Disney Parks On Newest "Magical Memories" Campaign
Next articleAZA Member Zoos and Aquariums Hosting "Party for the Planet"