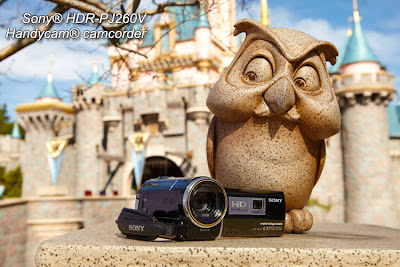 San Diego, CA, USA (April 2, 2012) /PRNewswire/ — Sony Electronics announced today it has teamed up with Walt Disney Parks and Resorts to promote its latest line of Handycam® camcorders in a new integrated marketing campaign that focuses on capturing and sharing family memories.

The “Share Magical Memories” co-branded campaign kicks off with a unique online contest and dedicated website hosted by Disney Interactive at www.disney.com/memories, where guests can submit a written entry about a special someone in their life, a family member, friend or educator, who has helped create a lasting memory. A panel of judges will review the stories about the special memory makers and select five grand prize winners. Each grand prize winner will receive a vacation for themselves and three guests, plus a vacation for their memory makers and three guests to Walt Disney World Resort. The winning families will also receive a Sony® HDR-PJ260V projector camcorder to document new memories before, during, and after their experience at Disney Parks.

There will also be a weekly sweepstakes on disney.com/memories where guests can enter daily on the site or text “SONY” to DISNEY (347639) on their mobile devices, for a chance to win prizes such as a $200 Disney gift card and a Sony HDR-PJ260V camcorder. One winner will be awarded per week.

“Sony is thrilled to be working with Disney Parks to promote its new line of Handycam camcorders,” said Hidenori Toyoda, director of the camcorder business at Sony Electronics. “It’s a perfect fit – they create magical memories for families and we make the products to capture and share those memories.”

To support the campaign, a series of custom videos showcasing the new camcorders will be produced and featured on disney.com/memories and in retail stores. Some videos will be more educational and showcase the benefits of Handycam camcorder features, including built-in projection, low-light capabilities, Optical SteadyShot™ image stabilization, a wide angle lens and high zoom functionality. Videos will also be recorded at the Disney Parks, using Handycam camcorders, that capture guest’s favorite Disney memories along with beloved Disney characters. In addition to the video series, the campaign will also be promoted through Sony and Disney’s various social media channels.

“We are equally delighted to be working with Sony on this program,” said Scott Cassidy, senior vice president, Disney Global Alliance Marketing. “Their newest line of Handycam camcorders clearly takes the idea of capturing and preserving great Disney Parks memories to a whole new level.”

The “Share Magical Memories” campaign will also have a strong presence at Sony Stores and select electronics retailers nationwide. As part of the campaign, Sony and Disney will offer a Gift with Purchase program where consumers can purchase Sony HD Handycam camcorders and receive an exclusive, limited-edition Disney item from May 14 through Sept. 30. Additionally, a specially designed experience for mobile phones will feature video and images, as well as allow consumers to enter the contest or sweepstakes.

With sleek, compact designs and a refined level of optical performance, Handycam camcorders offer best-in-class features that set them apart from the competition. Some new stand-out technologies integrated among select models include improved built-in projector for a brighter and larger projected picture (up to 100″ diagonal), Balanced Optical SteadyShot™ image stabilization which controls the entire optical path as one floating unit to improve image stabilization by up to 13 times better than its predecessor, By Pixel Super Resolution to create higher pixel count in still images by referencing hundreds of samples in the database to generate pixels close to reality, and Closer Voice utilizing Face Detection and its advanced audio processing to suppress unwanted noise and capture human voices with maximum clarity.

The new high-definition camcorders and their accessories are available, starting at about $300, at http://store.sony.com, Sony retail stores and other authorized retailers nationwide.

Joe Kleimanhttp://wwww.themedreality.com
Raised in San Diego on theme parks, zoos, and IMAX films, Joe Kleiman would expand his childhood loves into two decades as a projectionist and theater director within the giant screen industry. In addition to his work in commercial and museum operations, Joe has volunteered his time to animal husbandry at leading facilities in California and Texas and has played a leading management role for a number of performing arts companies. Joe has been News Editor and contributing author to InPark Magazine since 2011. HIs writing has also appeared in Sound & Communications, LF Examiner, Jim Hill Media, and MiceChat. His blog, ThemedReality.com takes an unconventional look at the attractions industry. Follow on twitter @ThemesRenewed Joe lives in Sacramento, California with his fiancé, two dogs, and a ghost.
Share
Facebook
Twitter
Linkedin
Email
Print
WhatsApp
Pinterest
ReddIt
Tumblr
Previous articleRainworks Omnimedia Develops Traveling Exhibit on Economics
Next articleAtlantic City Alliance Announces Core Team For Resort City’s Revitalization