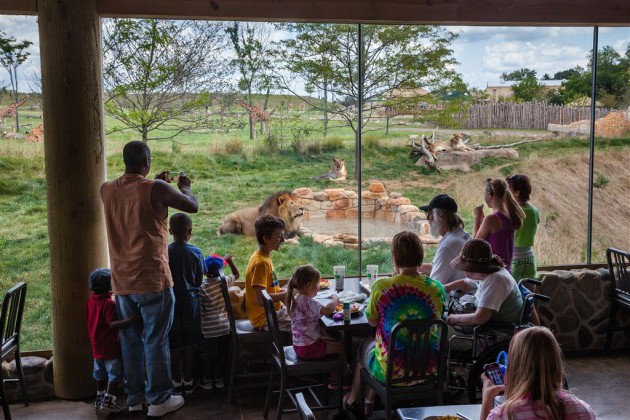 What Jurassic World teaches us about zoos

With the opening of Jurassic World this summer, we saw a glimpse of the future: An advanced hybrid zoo-theme park facing an insatiable market demand for instant gratification of bigger, better, and never-before-seen. Sound familiar?

The film presents Jurassic World: a massive revamp of the original Jurassic Park situated on Isla Nublar. This newer, bigger, better park boasts state-of-the-art features like holographic dinosaurs, a massive aquatic show arena where the seats move for views above and below water, and a glass orb gyrosphere ride through the dinosaur savanna. Not to mention the genetically modified hybrid, Indominus Rex.

Despite all of its theme park flair (and apparently unlimited budget), Jurassic World is, at its core, a zoo – a dinosaur zoo. And that combination – that hybridization – of parks, is where we see the future.

Over the last century, zoos have undergone a tremendous evolution. Their origins are rooted in royal collections, menageries, and circuses where animals were displayed in large cages, with little to no thought regarding animal welfare. Recreation, status, and economics (of the owners and spectators) were the primary goals of these prototype zoos. But today, nearly every one of the 229 AZA-accredited zoos and aquariums dedicates resources for conservation, ecosystems, biodiversity, and in-situ research. What’s more, today’s zoos’ primary focus is the welfare of the animals in their care, and the improvement of their lives and natural environments. But that evolution is far from complete.

In 1992, former head of the Brookfield Zoo, George Rabb, presented a diagram that demonstrated the history and future of zoo development. Looking at his 21st Century prediction, he saw immersive exhibits that would focus on ecosystems and the survival of species, at institutions that would create strong networks to achieve holistic conservation. 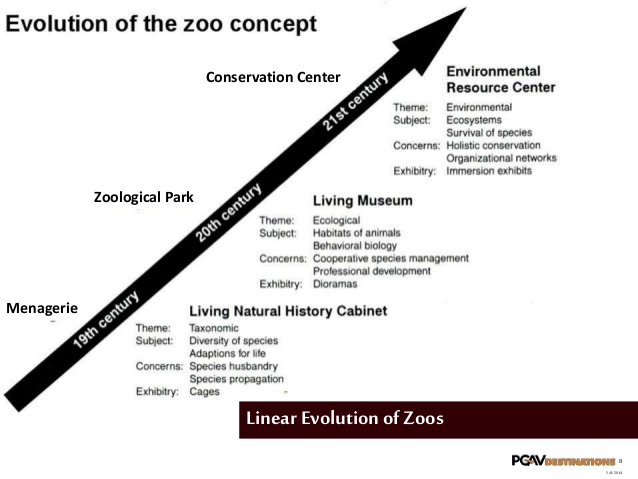 While Rabb’s diagram is an easy-to-follow chart, it implies a linear evolution of zoos where all began at a singular starting point and will follow the same evolutionary path. However, we know that evolution simply isn’t that clean. We know it branches off in many directions, creating new and fantastic forms, often surprisingly, through wild mutations or gradual improvement. In the end, evolution isn’t a straight line; it’s a twisting, crisscrossing, branching tree. And this is how we view the future of zoos: a blending of traditional organizations.

Let’s explain. Today, you most likely think of a zoo as an urban park – typically one per city – that’s flat, horizontal, mostly outdoors, in which you walk around to see different animal collections on display to learn about animals. The same is actually true for most city destinations: If you want to learn about history, you go to the history museum. If you want to see art, you go to the art museum. If you want to cool off, you drive 30 minutes outside of the city to the waterpark. What is already happening, and what we predict will only continue to happen, is that these elements will find more and more symbiosis between one another, and traditional zoos will begin to occupy a space somewhere in the middle of purely naturalistic and human-centered experiences.

The Columbus Zoo and Aquarium is an excellent example of this evolution. From its humble beginnings in 1905, the Columbus Zoo has become one of the largest and most successful zoos in the world. Today, in addition to its incredible animal collection and programs, it is home to the Safari Golf Club, Zoombezi Bay Waterpark, and The Wilds – the largest wildlife conservation center for endangered species in North America. In addition to shows, ropes courses, zip lines, and special events on site, the Zoo devotes $4 million annually to conservation efforts around the world to 70 projects in 30 countries.

Six Flags Great Adventure in Jackson, New Jersey has long incorporated animal exhibits and shows alongside thrill rides and roller coasters. Their recent renovation of the once separately ticketed African Safari incorporates over 350 acres of drive-through savanna into a fully produced ride.

Even smaller institutions such as Central Florida Zoo, Greensboro Science Center, South Florida Museum, and Durham Museum of Life and Science illustrate how the lines between museums, zoos, aquariums and theme parks are blurring.

However, SeaWorld might be the prime example in blending zoos and aquariums with other types of destinations. The organization maintains one of the largest animal collections in North America throughout its system of parks, caring for approximately 67,000 animals–including 7,000 marine and terrestrial animals and 60,000 fish. The SeaWorld & Busch Gardens Conservation Fund has awarded over $11 million in conservation grants to over 800 organizations around the world, and has rescued more than 26,000 sick or injured animals. At the three SeaWorld parks, guests can visit numerous animal exhibits, expansive aquariums, and ride some of the world’s most famous roller coasters. At SeaWorld’s three Aquatica waterparks, visitors enjoy fun and themed slides and lazy rivers that might also pass through aviaries and Commerson’s dolphin pools. And at Discovery Cove, 2,000 guests per day experience an exclusive resort setting that enables them to snorkel a coral reef, swim with dolphins, or simply relax on the beach. The lines are all but clear, and many of these destinations defy conventional labels. And that’s the mark of evolution. 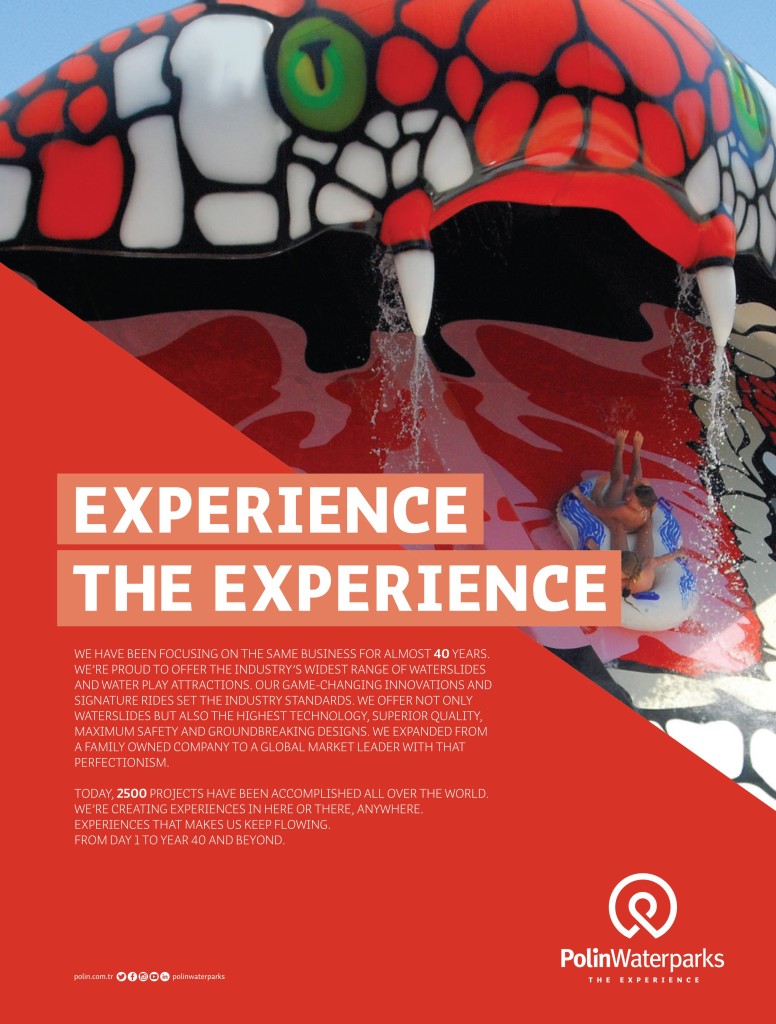 From an educational standpoint, Hybrid Zoo Theory reflects society’s views of the world today. We no longer examine the world by isolating individual elements, as we did in the past. We’re no longer classifying and delineating. We are aware of the individual’s role in the whole, as part of the great web of life. And it’s that connection that we examine, scrutinize, and teach about in today’s zoos, aquariums, and museums. It makes sense that we’d like to see the whole together in one place; and because each institution often teaches the same principles, the assumption is we’ll continue to see merging. The same can be said for theme parks and science education. Theme parks are becoming more sensitive to the issues and responsibilities of today. Meanwhile, science institutions want to better communicate to over-stimulated guests leveraging the effective storytelling elements found in many theme parks. Competition among these institutions is driving them to develop similarly, and this trend will grow to be the next recognized innovation in the future of zoos. We’re nowhere near hybridizing dinosaurs, but destinations are already finding a way. • • •

Joe Kleimanhttp://wwww.themedreality.com
Raised in San Diego on theme parks, zoos, and IMAX films, InPark's Senior Correspondent Joe Kleiman would expand his childhood loves into two decades as a projectionist and theater director within the giant screen industry. In addition to his work in commercial and museum operations, Joe has volunteered his time to animal husbandry at leading facilities in California and Texas and has played a leading management role for a number of performing arts companies. Joe previously served as News Editor and has remained a contributing author to InPark Magazine since 2011. HIs writing has also appeared in Sound & Communications, LF Examiner, Jim Hill Media, The Planetarian, Behind the Thrills, and MiceChat His blog, ThemedReality.com takes an unconventional look at the attractions industry. Follow on twitter @ThemesRenewed Joe lives in Sacramento, California with his wife, dog, and a ghost.
Share
Facebook
Twitter
Linkedin
Email
Print
WhatsApp
Pinterest
ReddIt
Tumblr
Previous articleChanging the Waterpark Game
Next articleThe Road to Blue World