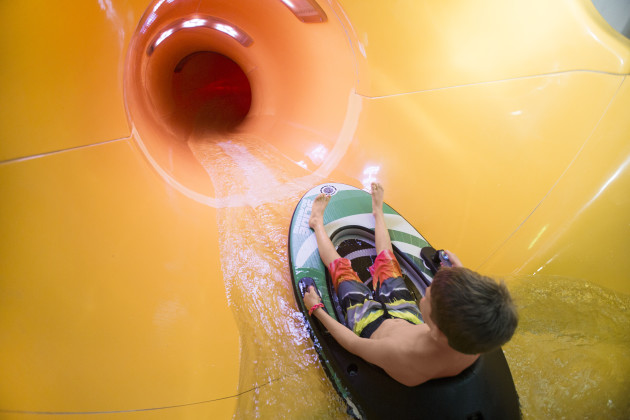 The concept for Slideboarding came to Denise Weston, Director of Imagination at WhiteWater, courtesy of her son Aydon and his friends, who one day at the waterpark, intuitively turned a traditional waterslide into a game. “Aydon and his buddies were slapping the waterslide joints as they rode down the slides and comparing who was able to hit the most when they got to the bottom,” explains Weston. “I felt this was a great way to combine a unique play experience into a traditional thrill attraction. Because it was so natural for them, I felt intuitively that it was going to work.”

Slideboarding takes that gaming concept – the basic, competitive activity of slapping the waterslide joints – introduces technology, and riders become players. The concept is simple: guests sit on a board equipped with red, green, blue and yellow buttons on the side handles. As they move down the waterslide, they pass under LED lights in four colors. Points are scored if they press the correct color button as they pass beneath the lighted target. Players receive feedback via small vibrations if they hit a target exactly.

The system combines existing technology such as RFID sensors and readers and analytical tracking and it translates over to iOS platforms and Android platforms as well to create the Slideboarding experience. 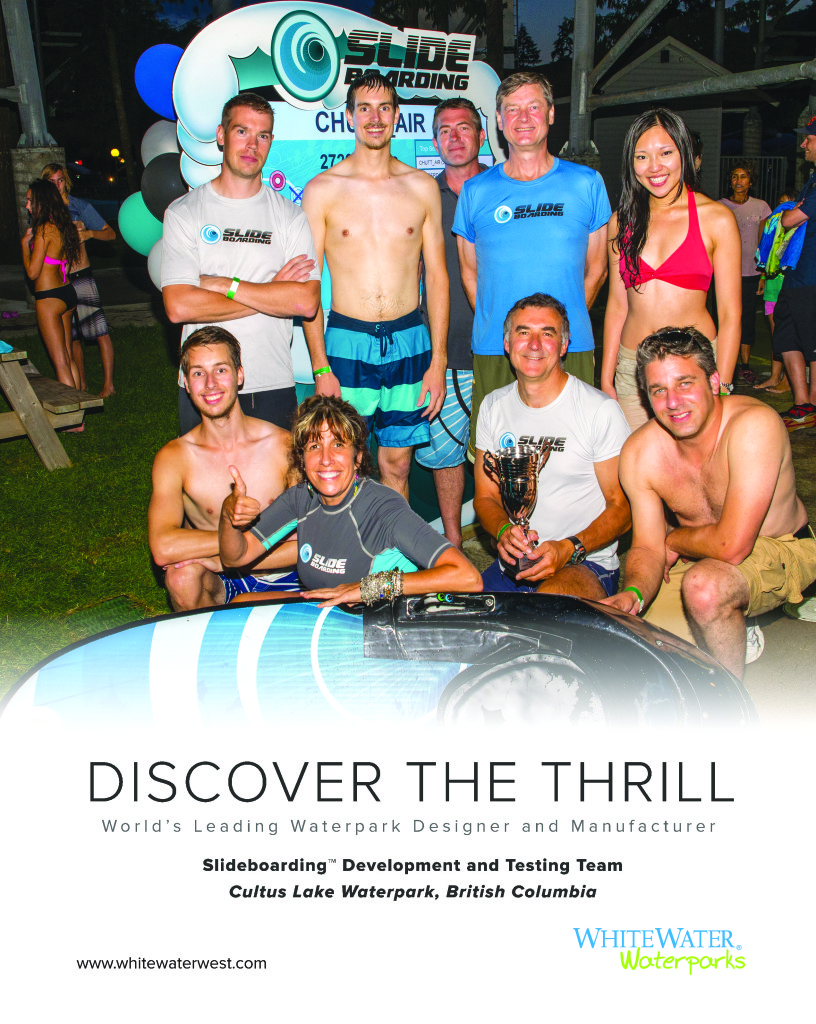 Slideboarding attractions can be built new, or as retrofits of existing slides. Either option enables a park operator to introduce something new and customized. A variety of components provides a range of customization opportunities such as theming, color scheme, soundtrack, style of registration stations, score boards, targets, and dashboards.

The core demographic for Slideboarding is 6-15 year olds, although the competitive nature of the attraction appeals to all ages and skill levels. “Some of the most positive interactions we have heard about are parents being able to ride and compete with their kids,” says Weston.

Each slide has the capability to challenge players at multiple levels. As they gain points and experience on repeat rides, they progress through the levels. The first level starts with just one color. The guest only has to focus on hitting the red button at the right time. As the levels progress, more colors come into the mix until the player is using all four colors. There are also a certain number of targets in each slide. The first level may have only 25% of the targets turned on. As the levels progress, more targets are activated.

Slideboarding allows guests to continue the fun they had during the day at the waterpark at home, using the Slideboarding app on their smartphones or tablets to simulate the ride experience. Weston is known for integrating technology in new ways that change the way people view “traditional” attractions. A pioneering accomplishment of her company, Creative Kingdoms, was the MagiQuest technology, honored by the Themed Entertainment Association in 2006 with a Thea Award for Breakthrough Technology. MagiQuest, now owned by Great Wolf Resorts, combines RFID-technology with computer and theatrical effects to simulate the effect of a magic wand in a built environment and help realize a storyline with an interactive guest experience. Denise developed an application of the technology for WhiteWater called SplashQuest. It follows the same concept as MagiQuest while integrating water. It currently is enhancing the guest experience at Yas Waterworld in Abu Dhabi, following the same concept while integrating water. 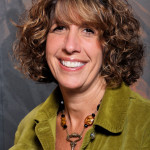 What does a Director of Imagination do?

At your local swimming pool, there are various levels of diving decks. The top deck is for the really brave, for those who crave bigger and better. My job is to get to the higher deck, to look at ideas, business and experiences and imagine what is possible. I look from 50,000 feet above and bring others up to the high deck with me, and then make them all jump into the pool together! But I’m also always looking up to the next deck to what’s next. Not only am I always going up and searching for the next level but also willing to dive in and get wet. It’s more than invention, it’s also about creation.

Where did the name Slideboarding come from?

Can the technology be integrated into multiple person slides?

It absolutely can, but right now we can’t tell you exact details of what it could look like.

How would you address potential operator concerns like reliability and upkeep?

We show operators how the technology works and that, at a core level, it is rather simple. Operating Slideboarding is not as complicated as one may think because we have taken specific steps in ensuring the back of house system is simple, intuitive and reliable.

We have a team dedicated to our “Partner Parks” to respond to any issues that arise. We’re completely equipped to support our clients with any maintenance services or alterations they require.

Can the game play be adjusted after installation?

Yes, and the game changes as you keep playing and progressing to different levels. It is possible for parks to offer different levels at different times, add levels, take away levels or even adjust what the levels look like without tearing the whole thing up. It’s designed to be flexible to provide the client with control over the guest experience.

What sort of data collection is happening on the back end?

We are learning a lot every day. The data we receive is shaping our next steps. We collect guest behavior such as how many times a single rider rides, how many riders per day or per hour, the move from the live game to the app and back. We’re working to understand guest behavior, which helps us and the operator as we design the next generation of attractions.

Slideboarding 2.0 will look much the same but it will feel different. As traditional games on computers or game systems do, Slideboarding will continue to grow and new features will be added over time. There are many layers of this game that allow the manufacturer (WhiteWater) and the client to grow the experience endlessly.

Although we’re currently on Slideboarding 1.0, we already know what 2.0, 3.0 and 4.0 look like. We’re planning for the future of waterparks.

How else can the gamification concept be applied in waterparks?

There’s a lot of potential for this concept, but to know specific details you need a VIP pass into WhiteWater’s secret laboratory.

“I’ve learned that technology is most effective when it elevates a traditional play experience instead of replicating or replacing it,” says Weston. “The live environment where kids can touch the water, run around, feel the wind in their hair provides the most fun experience.”

Weston explains that she likes to start with an idea and then sees how the technology can augment it. In the case of Slideboarding, the simple concept of introducing a game into a waterslide evolved as the team addressed challenges during development.

Perhaps surprisingly, combining water and electricity wasn’t the biggest challenge the team faced. Ensuring that Slideboarding was completely user-friendly for both the operators and guests was critical before deployment. That simplicity factor was key to making the attraction appealing for parks and for guests.

“Slideboarding gives park operators the ability to tap into the massive market of gamers and tech savvy kids while still appealing to parents and grandparents because the game is simple to play,” says Weston. “Slideboarding was created by watching how kids intuitively play, so naturally it’s something kids love.” • • • 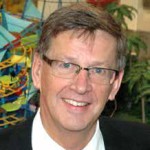 Turning waterslides into a game doesn’t seem immediately obvious to most people, but it seems to work. Why do you think that is?

Anyone with a child or grandchild has seen the growth of gaming. In fact we don’t have to monitor our kids watching T.V. or playing outside, we need to monitor their amount of game playing. What WhiteWater has done is take this clear desire of kids and overlay that experience onto our rides. This has never been done before in the waterpark or the amusement park industries. With respect to our portfolio of products the overlay of gaming takes them all to a new level.

How can technology best be combined with waterpark attractions?

Denise has been a major proponent for the integration of mobile technology into attractions at WhiteWater. So far Slideboarding has been the first attraction to integrate this kind of technology. We have products that have huge potential to integrate gaming and mobile technology, but many of the concepts are still in development. The idea of actively using a cell phone in a waterpark feels so alien that it’s something the industry is only starting to consider.

For 35 years waterparks have been created around wave pools, lazy rivers, play structures and slides so in some ways Slideboarding doesn’t fit. But we believe that it has the potential of being a game changer in the industry…..both wet and dry. WhiteWater is the only company in the waterpark industry to win an IAAPA Best New Technology award, and we have won two. That said this technology is slated to dwarf the technologies found in the AquaLoop, the AdenaLIM (our linear induction motor based water coaster) and our various Hopkins Rides. It is the overlay, the public competition and the fact that this ride, in the form of a game, can be taken home with you.

What has been the response to the experience?

Perhaps optimistically we agreed only to sell five systems for the 2015 operating season. We sold out at the first trade show. And the response was from some of the most sophisticated operators in the industry: Village Road Show’s Wet n Wild park in Las Vegas; Great Wolf Lodge in the Poconos and Williamsburg; Hyland Hill’s Water World (the largest municipally owned waterpark in the nation), and West Edmonton Mall. You can expect to see over 20 Slideboarding installations by the end of 2016… and we don’t expect it to stop there

Joe Kleimanhttp://wwww.themedreality.com
Raised in San Diego on theme parks, zoos, and IMAX films, InPark's Senior Correspondent Joe Kleiman would expand his childhood loves into two decades as a projectionist and theater director within the giant screen industry. In addition to his work in commercial and museum operations, Joe has volunteered his time to animal husbandry at leading facilities in California and Texas and has played a leading management role for a number of performing arts companies. Joe previously served as News Editor and has remained a contributing author to InPark Magazine since 2011. HIs writing has also appeared in Sound & Communications, LF Examiner, Jim Hill Media, The Planetarian, Behind the Thrills, and MiceChat His blog, ThemedReality.com takes an unconventional look at the attractions industry. Follow on twitter @ThemesRenewed Joe lives in Sacramento, California with his wife, dog, and a ghost.
Share
Facebook
Twitter
Linkedin
Email
Print
WhatsApp
Pinterest
ReddIt
Tumblr
Previous articleOcean Park Hong Kong
Next articleAttraction Hybridization