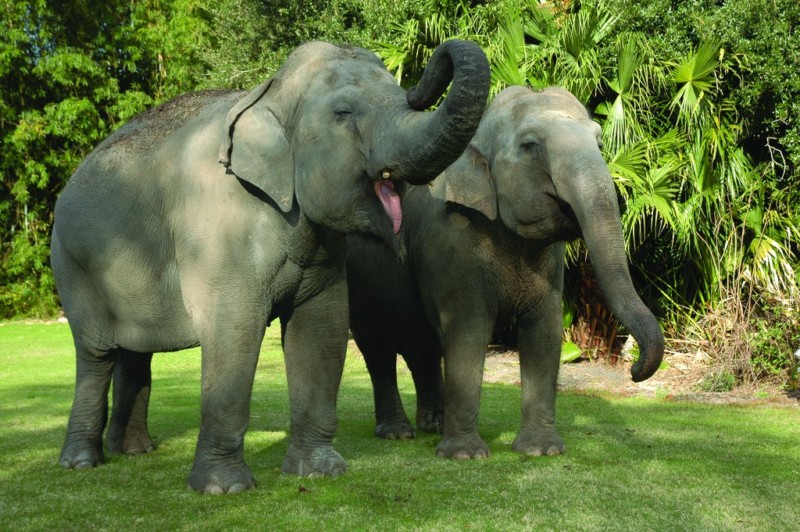 [quote]By backing the 96Elephants effort, we hope to bring attention to the recent increase in demand for ivory that has resulted in the tragic spike in African elephant deaths. By working with lawmakers, we also hope to close some of the loopholes in existing ivory trade laws.’’ — Audubon Zoo vice president and general curator Joel Hamilton[/quote]

New Orleans, LA, USA — Audubon Nature Institute has joined a broad-based, worldwide coalition committed to saving African elephants from extinction by advocating for stricter regulations on ivory sales.The effort, which will culminate with World Elephant Day activities at Audubon Zoo on August 12, 2014, also seeks to raise money to bolster programs to protect the world’s largest land animals and to educate the public about the link between ivory consumption and the staggering death toll of African elephants.In 2012, poachers in Africa killed an estimated 35,000 elephants – an average of 96 elephants each day that represents the worst mass slaughter since the international ivory trade was banned in 1989. That grim statistic has prompted the creation of 96Elephants.org, which is dedicated to uniting a wide range of organizations to coordinate and leverage their collective influence, constituencies and resources to save African elephants from extinction.For its part, Audubon Nature Institute is supporting the efforts of the Wildlife Conservation Society (WCS), pledging to deliver at least 9,600 signatures to raise awareness to Governor Bobby Jindal’s office and the Legislature on World Elephant Day.WCS organizers hope that by mounting similar efforts in all 50 states on the same day, the 96Elephants campaign will place the spotlight on the need to change legislation about the rules and regulations over the elephant tusk and rhino horn trade. The goal is to deliver a total of 960,000 signatures across the nation.“The United States is the second largest importer of ivory in the world, trailing only China,’’ said Audubon Zoo vice president and general curator Joel Hamilton. “And ethically, that’s wrong.”Audubon Nature Institute staffers have been collecting signatures from visitors to all attractions. Audubon also has used social media to encourage participation in the 96elephants initiative.On Aug. 12, Audubon Zoo will host a “Go Grey Day,’’ when staff will wear and distribute grey ribbons in support of World Elephant Day. Guests also will be encouraged to wear grey.Keeper chats will be held throughout the day, which will also feature elephant craft activities.Much of the ivory trade in the United States is currently legal under a confusing set of regulations that perpetuates black market sales of illegal ivory. A moratorium on U.S. ivory sales, supporters say, would represent a clear and simple rule that will help more elephants survive.The 96Elephants campaign is calling on the Obama administration to institute a moratorium on domestic ivory sales and to call on other nations to do the same. The strategy to stop the killing hinges on increased enforcement and improved management at 48 sites across Africa that house two thirds of the continent’s elephant population.Most Ivory traffickers belong to well-organized syndicates that operate as transnational criminal networks that often participate in other illegal activities, including the sale of narcotics and weapons, and some have links to terrorist organizations. The 96Elephants collation has recruited more than 125 zoos, aquariums and zoological organizations and those numbers continue to grow.  Many celebrities have lent their support to the effort, including New Orleans native Ellen DeGeneres, Billy Joel, Gloria Steinem, Nancy Grace and Dr. Deepak Chopra.To learn more about the 96.elephants initiative, go to http://www.auduboninstitute.org/96-elephants To sign the petition, visit any Audubon attraction by Aug. 11 or go to:https://audubon.wufoo.com/forms/z1n2hp851jzddky/

Joe Kleimanhttp://wwww.themedreality.com
Raised in San Diego on theme parks, zoos, and IMAX films, InPark's Senior Correspondent Joe Kleiman would expand his childhood loves into two decades as a projectionist and theater director within the giant screen industry. In addition to his work in commercial and museum operations, Joe has volunteered his time to animal husbandry at leading facilities in California and Texas and has played a leading management role for a number of performing arts companies. Joe previously served as News Editor and has remained a contributing author to InPark Magazine since 2011. HIs writing has also appeared in Sound & Communications, LF Examiner, Jim Hill Media, The Planetarian, Behind the Thrills, and MiceChat His blog, ThemedReality.com takes an unconventional look at the attractions industry. Follow on twitter @ThemesRenewed Joe lives in Sacramento, California with his wife, dog, and a ghost.
Share
Facebook
Twitter
Linkedin
Email
Print
WhatsApp
Pinterest
ReddIt
Tumblr
Previous articleNewBay Media Acquires AV-IQ Online Resource from InfoComm
Next articleAustralia’s Crown Resorts Announces Partnership to Develop Resort on Las Vegas Strip