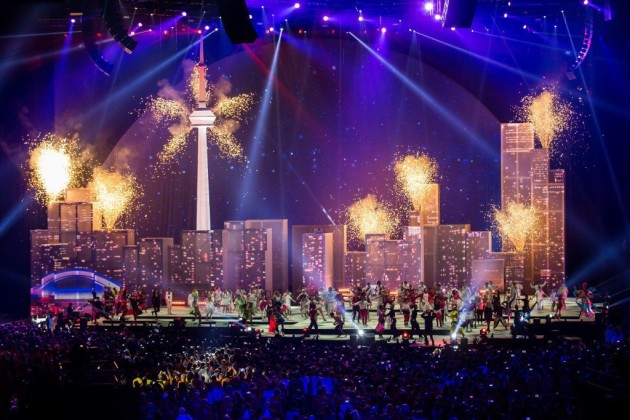 Toronto, ON, Canada — BaAM Productions announced that the Canadian Event Industry recognized the Toronto 2015 Pan Am Games Closing Ceremony for Best Entertainment Production in 2015 at its annual Awards Gala on March 31. The Canadian Event Industry Awards describes itself as “the pinnacle mark of professional achievement and one of the highest honours among Canadian event professionals.” BaAM President, Annemarie Roe, accepted the award at the Gala, recognizing the Games as an incredible opportunity for the BaAM team and the best of Canadian event resources to shine alongside the awe-inspiring Pan Am athletic and cultural performances.

As Ceremony Producer, BaAM Productions, in partnership with FiveCurrents, collaborated with the TO2015 Pan Am Organizing Committee more than a year in advance to create and deliver a world-class entertainment spectacular that harnessed the energy and passion of the Games. The creative segments, protocol elements, and star-powered finale brought athletes, officials, organizers, volunteers and spectators together to celebrate as one and carry forward the message: “Unity through Diversity.”

Joe Kleimanhttp://wwww.themedreality.com
Raised in San Diego on theme parks, zoos, and IMAX films, InPark's Senior Correspondent Joe Kleiman would expand his childhood loves into two decades as a projectionist and theater director within the giant screen industry. In addition to his work in commercial and museum operations, Joe has volunteered his time to animal husbandry at leading facilities in California and Texas and has played a leading management role for a number of performing arts companies. Joe previously served as News Editor and has remained a contributing author to InPark Magazine since 2011. HIs writing has also appeared in Sound & Communications, LF Examiner, Jim Hill Media, The Planetarian, Behind the Thrills, and MiceChat His blog, ThemedReality.com takes an unconventional look at the attractions industry. Follow on twitter @ThemesRenewed Joe lives in Sacramento, California with his wife, dog, and a ghost.
Share
Facebook
Twitter
Linkedin
Email
Print
WhatsApp
Pinterest
ReddIt
Tumblr
Previous articleJack Rouse Associates Makes Science Fun for Kids at New H-E-B Science Center
Next articleWatermelon Magic Returns to Giant Screen and 3D Theaters for Earth Day