For two new visitor centers in San Francisco, Lands End Lookout and the Golden Gate Bridge Pavilion, both run by the Golden Gate National Parks Conservancy, Cinnabar fabricated the exhibit/retail elements of the public experiences, for the design firm Macchiatto. The experiential nature of the displays and the collaborative production process both departed from traditional models, as Jeremy Regenbogen of Macchiato describes. “While most visitor centers make a clear distinction between interpretive and retail spaces, we took a new approach. The client (Golden Gate National Parks Conservancy) creates unique products with true interpretive value, not the knickknacks commonly found in visitor centers. Early in the planning process, we decided to fully integrate interpretive and retail moments for both projects. The synergy between an interpretive product and an accompanying exhibit panel can be quite strong, especially when the visitor brings a product home and the interpretation carries on for them eternally. 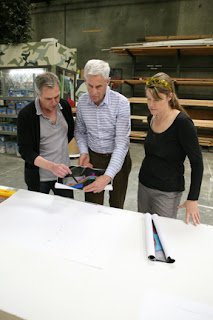 In other words, the collaborative, transparent model advocated by Cinnabar in the field reflects a model consciously facilitated within the company. “Effective collaboration demands that you respect the skill of other participants,” says Katz. “I encourage the project managers to work at being open, to listening. You can initiate a conversation with anyone. We believe in the critique – its not about the person, but about the work. We foster transparency, which you can see and hear in our open plan office. We make an effort to become familiar with one another’s work. My favorite saying – promoting the idea of management by walking around – is ‘the best fertilizer is the farmer’s shadow.’ I’m not going to tell you what to do, but I want you to listen when I have something to say. Once you establish that ethos you have laid the groundwork. Our origins as a fabricator provide a positive benefit at all levels of the company: we are artisans who build and make things.”

Highlights from Cinnabar’s museum portfolio
by Joe Kleiman
AMERICAN WEST & OPEN SPACES
In 2010, Cinnabar worked with the design from Muniz/McNeil and the Autry National Center of the American West on the traveling exhibit “HomeLands: How Women Made the West.” The exhibit, based on the book by Virginia Scharff and Carolyn Brucken, examined three different areas of the American West – Rio Arriba, Colorado Front Rage, and Puget Sound, and women’s stories from each area. Cinnabar created an exhibit that can easily be assembled and disassembled while maintaining extensive audiovisual components, collections of artifacts, and tactile exhibit surfaces for a four-city tour.
During the same year, not too far from The Autry, at Pasadena’s Jet Propulsion Laboratory von Karman Visitor Center, Cinnabar joined forces with design firm C&G Partners and JPL to reimagine the center’s exhibits. New graphics, high security artifact displays, vitrines, model rigging and a/v integration were all supplied by Cinnabar. In what has become a common practice for the company, they also fabricated modular structures that allow for easy change out of images, text, and audiovisual content as NASA’s expedition of the universe consistently evolves.

FLOATING ANIMALS
For the Natural History Museum (NHM) of Los Angeles, on a team headed by Simon Adlam, NHM Director of Exhibits & Creative Director, Cinnabar worked with graphic design firm KBDA and NHM staff to create a new “Age of Mammals” exhibit, where panels can easily be switched out (if information needs updating).

But moving things around was not as easy with the specimens themselves. According to Jeannie Lomma, Senior Project Manager at Cinnabar, “There are some serious seismic factors that affect NHM. We were also dealing with large and delicate exhibits and an old 1913 floor. The artifacts in that exhibit have some flexibility, but for the most part, they’re situated permanently in place for a 15-year duration.”

To resolve the issues with the floor, the exhibit structures are supported from steel studs welded to the main beams, floating the structures about one inch above the floor.
ENTER THE GRID
The floor proved to be part of an exhibit for another museum, the California Academy of Sciences in San Francisco. Damaged by earthquakes, the entire building, save for one historic wall, was slated for demolishment and reconstruction. While the new building – a celebrated design by Renzo Piano – was being built on the site of the original in Golden Gate Park, a temporary location opened in a historic factory in the city’s downtown district, near the museums and entertainment venues of Yerba Buena Park.

This temporary exhibition space, which featured a three-story coral reef, was a collaborative effort between Cinnabar and Thinc Design. However, when it came to the huge project of the permanent museum, the two groups took on individual challenges. Thinc designed the exhibits for the Academy’s Steinhart Aquarium, while Cinnabar produced the exhibits for its Kimball Natural History Museum.
Cinnabar’s work entailed five different areas: “Islands of Evolution,” “Early Explorers Cove,” “Altered State,” “Tusher African Center,” and the Wilson Naturalist Center.
“Unlike NHM,” says Lomma, “the Academy was designed for maximum flexibility. Working with Renzo Piano and the Academy design team, we designed a grid system of anchoring for the building’s radiant floor.” Also integrated into the grid were conduits and outlets for power and audiovisual needs.
[click here to see feature article on this project from IPM spring 2009]
CHILD’S PLAY
The “Early Explorers Cove” at the Academy is a children’s play area for the five-and-under crowd. Its key features are a treehouse, a backyard area complete with garden shed and vegetable patch, a tide pool-themed infant area, and a play-structure of the research schooner Academy. (Those who remember the original Sony Metreon in San Francisco may be interested to know that Cinnabar also built “Where the Wild Things Are.”) Lomma states, “Early childhood is ALL about themeing. All the goals and objectives are designed as play, but they’re really designed to bring younger children in for educational purposes.”

At California’s Discovery Science Center (DSC) in Santa Ana, Cinnabar produced “Eco Challenge,” a participatory attraction/exhibit that caters to a wide range of age groups. The exhibit had been first envisioned as targeting middle schoolers, but Cinnabar’s research showed that the visitor demographic could extend to younger groups as well. This resulted in one immediate change: the “Discovery Market,” a life-size recreation of a grocery store, complete with computer-enhanced shopping carts, ended up with carts of two differing heights, so that younger and shorter visitors could also participate fully.

Another aspect of Eco Challenge, which is all about making eco-friendly choices, is “Race to Recycle.” This is a fully interactive experience: kids compete to pull actual items off a conveyor belt and sort them into the proper recycling bins. “The visitor is actually participating in the exhibit,” explains Lomma. This analytical act is not only popular with children, “but many adults get very involved with it as well,” she adds.
A TRANSFORMATIVE PROCESS
“When we started this company, we were trying to decide what to call it,” remembers Jonathan Katz, Cinnabar’s CEO. “We wanted to have a name that was easy to remember, like Kodak. One of my partners was a painter and he came in one day and mentioned the red color based on the mineral cinnabar. The rock itself is mined for both pigment and mercury. And it was also used in ancient China to carve cartouches and other decoratives. It had mystical and transformative properties. We like the idea of transformation.” • • •
The Cinnabar Culture

• Schedule Compression and Fast-Track Methodology.Building scenery and special effects for broadcast and film taught the company how to produce complex projects within tight deadlines, without compromising quality.

• Constant Business Innovation. Collaborative models of supply chain management furnished lessons for a transparent, efficient design/build process that engages all participants in the supply chain: subcontractors, freelancers, shop production systems, and all facets of the client institution including curatorial, education, development, operations and marketing.
• From Analog to Digital. The digital revolution drives integration of media into the built environment, and connects exhibits to a larger virtual, socially linked world. Technology powers uniquely engaging interactive exhibits.
• Sustainability. Greenbuilding principles influence the choice of materials and equipment, yet more significantly they address multiple agendas: immediate program requirements and long-term performance.
• Change is the new normal.A decentralized, modular approach to fabrication and control anticipates and simplifies the process of refreshing an exhibit’s content and supports optimizing reuse through flexibility.
• Know Your Strengths. Selectivity about projects and hands-on involvement at all levels fosters long-term relationships and transparency.

Judith Rubin
Judith Rubin ([email protected]) is a leading journalist, publicist, strategist, blogger, content marketing specialist and connector in the international attractions industry. She excels at writing about all aspects of design and technical design, production and project management. Areas of special interest include AV integration and show control, lighting design and acoustics, specialty cinema, digital video and world’s fairs. Judith has ties to numerous industry organizations. From 2005-2020 she ran communications, publications and social media for the Themed Entertainment Association (TEA). In 2013, she was honored with the TEA Service Award. She was development director of IMERSA, and co-chair of the 2014 IMERSA Summit. She was publicist for the Large Format Cinema Association in the 1990s, now part of the Giant Screen Cinema Association (GSCA) and has also contributed to the publications of PLASA, IAAPA and the International Planetarium Society. Already making her mark as a magazine and book editor, Judith joined World’s Fair magazine in 1987, which introduced her to the attractions industry. Launching as a freelancer in the mid 1990s she has contributed to dozens of publications and media outlets including Funworld, Lighting&Sound America, Sound & Communications, Urban Land, The Raconteur and The Planetarian. She joined InPark in 2010. Judith earned a Bachelor of Fine Arts from Pratt Institute. She has lived in New York City and the San Francisco Bay Area, and now makes her home in Saint Louis, where she is active in the local arts and theater community.
Share
Facebook
Twitter
Linkedin
Email
Print
WhatsApp
Pinterest
ReddIt
Tumblr
Previous articleNOUSGuide Introduces Downloadable Mobile Software Solution for Museums
Next articleNapa’s COPIA: The American Center for Wine, Food and the Arts Hits the Auction Block