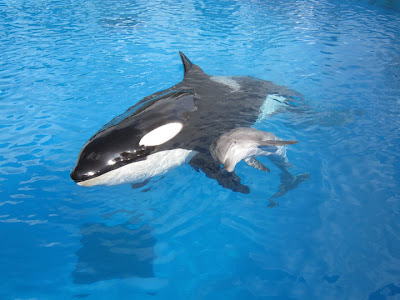 Shouka, a beloved and cherished member of the Six Flags Discovery Kingdom family, is now living at SeaWorld San Diego. She touched millions of lives and we are forever grateful for the time she spent here. Please join us in wishing Shouka much love and a fond farewell.

Shouka, a killer whale, was born in 1993 at Marineland Antibes.  From 2002-2004, she resided at Six Flags Worlds of Adventure (the former SeaWorld Ohio), and was transfered to Six Flags Marineworld (now Discovery Kingdom) following that park’s closure.  During her time at Six Flags parks, the chain was unable to acquire a mate, resulting in public petitions to have her moved to another facility. She was the only killer what at the Vallejo park.

Breaking News: Six Flags Wild Safari will discontinue allowing guests to drive their own vehicles through its gates on September 30, 2012. The animals will all remain on property and under the excellent care of our veterinary and animal husbandry staff. More to come when we release the details for our 2013 season on August 30, 2012.

Six Flags Wild Safari opened in 1974 and features a 4.5 mile auto trail that meanders through the wildlife preserve.

Joe Kleimanhttp://wwww.themedreality.com
Raised in San Diego on theme parks, zoos, and IMAX films, InPark's Senior Correspondent Joe Kleiman would expand his childhood loves into two decades as a projectionist and theater director within the giant screen industry. In addition to his work in commercial and museum operations, Joe has volunteered his time to animal husbandry at leading facilities in California and Texas and has played a leading management role for a number of performing arts companies. Joe previously served as News Editor and has remained a contributing author to InPark Magazine since 2011. HIs writing has also appeared in Sound & Communications, LF Examiner, Jim Hill Media, The Planetarian, Behind the Thrills, and MiceChat His blog, ThemedReality.com takes an unconventional look at the attractions industry. Follow on twitter @ThemesRenewed Joe lives in Sacramento, California with his wife, dog, and a ghost.
Share
Facebook
Twitter
Linkedin
Email
Print
WhatsApp
Pinterest
ReddIt
Tumblr
Previous articleComedienne and Actress Phyllis Diller Dead at 95
Next articleAlton Towers Scare Maze Will Act as Preview of 2013 Attraction