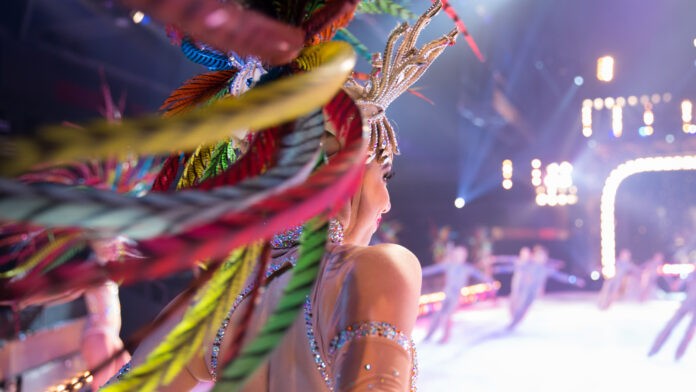 Blackpool Pleasure Beach’s Hot Ice returns for 2021 with a new show – Euphoria.  The show, which is the world’s longest running ice show, opens for the summer season on 8th July and runs until 11th September 2020 and anyone booking tickets in May for performances on selected dates in July can get a money off deal.

This year’s show features what’s hot in ice skating with the very best performers from around the world taking to the ice in over 400 costumes to a collection of popular music, state-of-the-art lighting system and explosive pyrotechnic fire effects.

Hot Ice has always been the place to see the world’s best skaters.  Numerous national, world and Olympic champions have performed in the show since its inception.  This has made Hot Ice one of the world’s best known and most beloved ice skating shows with a reputation for amazing choreography and stunning costumes.

This years’ new production ‘Euphoria’ is a fast-moving live performance. Hot Ice is a dream that is brought to life by the stunning lighting that reflects the mood and magnificence of each scene. The young and dynamic skaters gracefully slide and glide into a world of creative paradise with intricate choreography performed to beautifully written music, conceived and inspired by the greatest soundtracks to our lives.

Amanda Thompson OBE has been both Producer and Director of the Hot Ice Show for over 20 years. In 2005 she also took over as Managing Director of Blackpool Pleasure Beach and has managed to successfully combine the two major and demanding roles.

The show is choreographed by Oula Jaaskelainen, a former Olympic athlete and Hot Ice cast member, who creates excitement by encouraging the performers to skate at high speeds with intricate footwork and spine-tingling jumps.

Created by the talented Pleasure Beach Wardrobe Team, the show’s costumes are among the best in the theatre world.