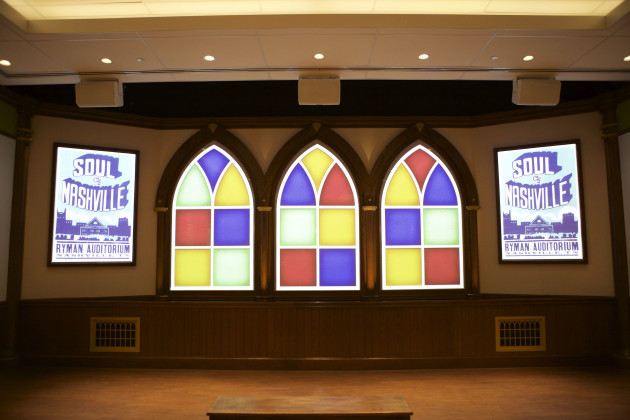 Nashville, TN, USA — Ryman Hospitality Properties has unveiled its $14 million Ryman Auditorium expansion and daytime tour attraction, which begins with a state-of-the-art theater experience titled “Soul of Nashville.” Visitors are immersed in the Ryman’s legendary history as the room brings to life more than a century of legendary performances and a new collaboration featuring Darius Rucker, The Fisk Jubilee Singers, Sheryl Crow and Vince Gill. Once “Soul of Nashville” has provided an introduction to the Ryman story, visitors enjoy five new exhibits: “Workin’ on a Building,” “Showplace of the South,” “Mother Church of Country Music,” “Ryman Stage to Screen” and “Ryman Renaissance.” Guests will see genuine artifacts and enjoy videos with hosts Charles Esten, Marty Stuart, Nicole Kidman, Ricky Skaggs, Robin Roberts and Trisha Yearwood taking them through each chapter of the Ryman’s illustrious history.

“When you see the Ryman’s past come to life in such an innovative way, it’s hard to imagine that this building was nearly lost to history just 20 years ago,” said Colin Reed chairman and chief executive officer of Ryman Hospitality Properties, Inc. “As more and more people from all corners of the world discover what Nashville has to offer, we now have a fully-immersive way to share with them just how important the Ryman is to Nashville, our artist community and to the people who visit this great city. The continued investments our company has made in the Ryman Auditorium are a testament to the fact that this building should and will live on forever as the most important Nashville icon.”

“To say there is no other place like the Ryman is an understatement,” said Sally Williams, Ryman Auditorium general manager. “The story of this building is so powerful and emotional— we needed an extraordinary way to take visitors on our nearly 125-year journey. The “Soul of Nashville” and our new exhibits do that job beautifully.”

“The Ryman Auditorium is one of the great music venues in the world and is synonymous with Nashville’s brand as Music City,” Mayor Karl Dean said. “This expansion is a testament to the strength of our music industry and our cultural significance. Thank you to Colin and Ryman Hospitality Properties for your leadership and confidence in our city.”

The original 1892 auditorium remained untouched during the renovation. Nashville- based firms Hastings Architecture Associates and R.C. Mathews Contractor headed up the $14 million project. 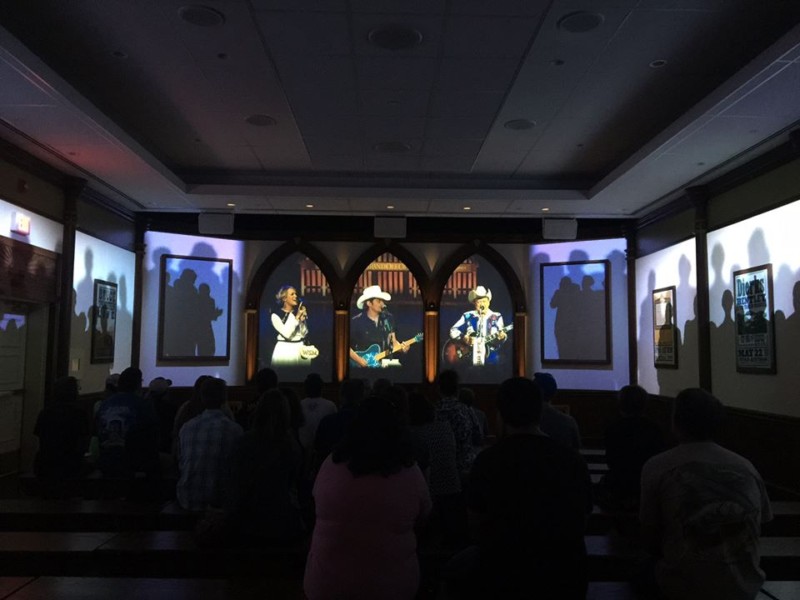 “Soul of Nashville” kicks off the reimagined Ryman daytime tour experience in a new 100-seat theater custom built for the show. Created by BRC Imagination Arts of California, “Soul of Nashville” utilizes cutting edge technology to surround the audience with moving images on multiple projector planes and sound that engulfs the senses and puts them in the center of the show. Through special effects, archival images and footage, performers from the Ryman’s past become multidimensional right before the viewer’s eyes.

“The opportunity to put guests inside the history of the Ryman has been one of the most satisfying experiences in our 33 year history,” said Brad Shelton, creative director of BRC Imagination Arts. “We’re immensely proud to be a part of it.”

The show culminates in a finale that delivers a montage of photos, posters and video footage from the Ryman’s contemporary history since reopening 20 years ago. Seamlessly, the energy captured in those performances transitions into a new arrangement of the traditional song, “Workin’ on a Building,” featuring a magnificent performance by the acclaimed Fisk Jubilee singers, who have a history with the Ryman dating back to 1892, and soloists Darius Rucker, Sheryl Crow and Vince Gill. The choir and stars appear larger-than-life on the screens as if performing a concert right in the room. By design, this experience makes an emotional connection with the audience who will then exit the theater and begin the rest of their tour experience. 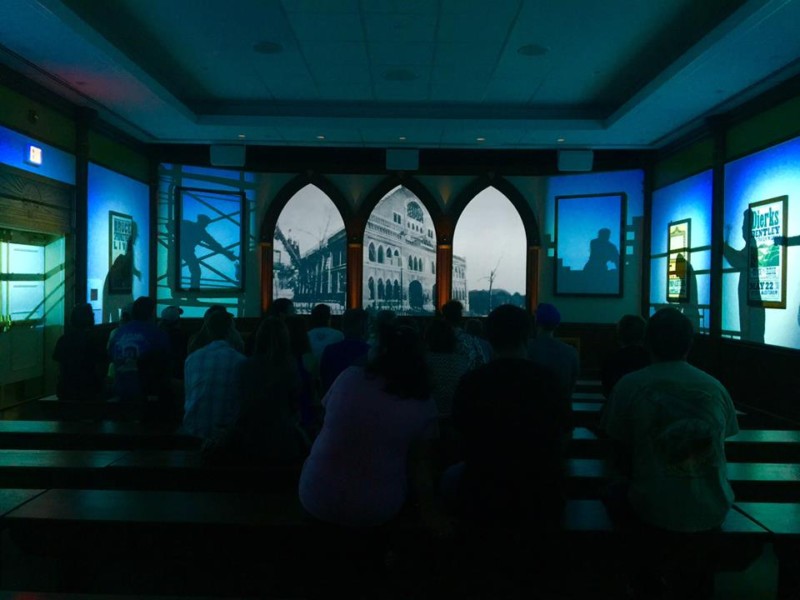 “Soul of Nashville” is hosted by a virtual Lula C. Naff, the Ryman’s longtime promoter and manager (1904-1955.) A remarkable woman not widely known today, Naff’s business and booking savvy garnered prestige for both Ryman Auditorium and the city of Nashville as a performance arts center for the region. Known as the “first lady” of theater management, she brought the greatest performers and Broadway plays of the day to the Ryman including: Bob Hope, Charlie Chaplin, Enrico Caruso, Harry Houdini, Katharine Hepburn, Mae West, Ziegfeld Follies, “Guys and Dolls,” “Oklahoma!” and many more. Naff also ushered the Grand Ole Opry into the Ryman in 1943, where the show resided until 1974. Under her leadership, the Ryman became a showplace for great diversity, a tradition that continues today. She was also a trailblazer for working women, branching out on her own before women even had the right to vote.

“Workin’ on a Building”

Video host Trisha Yearwood tells of the famed meeting between Thomas Green Ryman and Samuel Porter Jones, and the inspiration that led to the construction of one of the nation’s grandest tabernacles. On display are artifacts documenting Ryman’s life, construction of the building and events that took place during the early years of the Union Gospel Tabernacle.

“Showplace of the South”

Most know of the Grand Ole Opry’s time in the Ryman, but some may not be aware of the performances that graced the stage long before the radio show arrived. Video host Nicole Kidman shares the fascinating story of the Ryman’s transition from a revival hall into a premier performing arts venue. At the forefront was longtime manager Lula C. Naff. 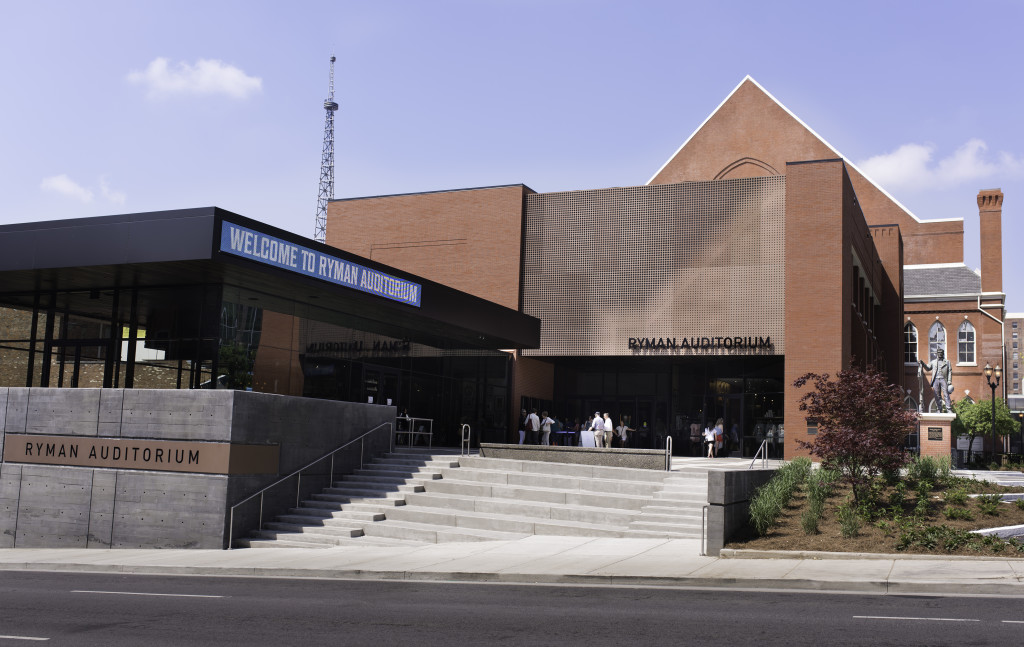 The Ryman acquired a new identity when a soon-to-be world-famous radio program found itself in search of a new home. The Ryman’s new tenant brought a whole new fan base into the pews when they began broadcasting their clear-channel signal coast to coast from the stage of the old “Mother Church.” Hear firsthand accounts from Opry members Marty Stuart and Ricky Skaggs as they host the exhibit video, enjoy rare performance footage and see stage costumes and instruments on display.

Many remember hearing the sounds of the Opry resonating over the airwaves but do not realize how many times the Ryman has appeared on the big screen. Visitors will see clips from the concert tapings, television episodes and major motion pictures that have used the Ryman as their setting during a video hosted by Charles Esten. From “Coal Miner’s Daughter” to television’s “Nashville,” “Honkytonk Man” to “American Idol,” the Ryman has served as an important backdrop for many filmmaking projects over the years.

The last stop on the tour is an exhibit dedicated to the ongoing legacy of the Ryman. Video host Robin Roberts shares recent Ryman history and relates the importance of its continued tradition. Today, the Ryman hosts 200-250 events annually, and, just like the generations of the past, people sit in the same wooden pews to see the greats of their day perform and breathe new life into the room. 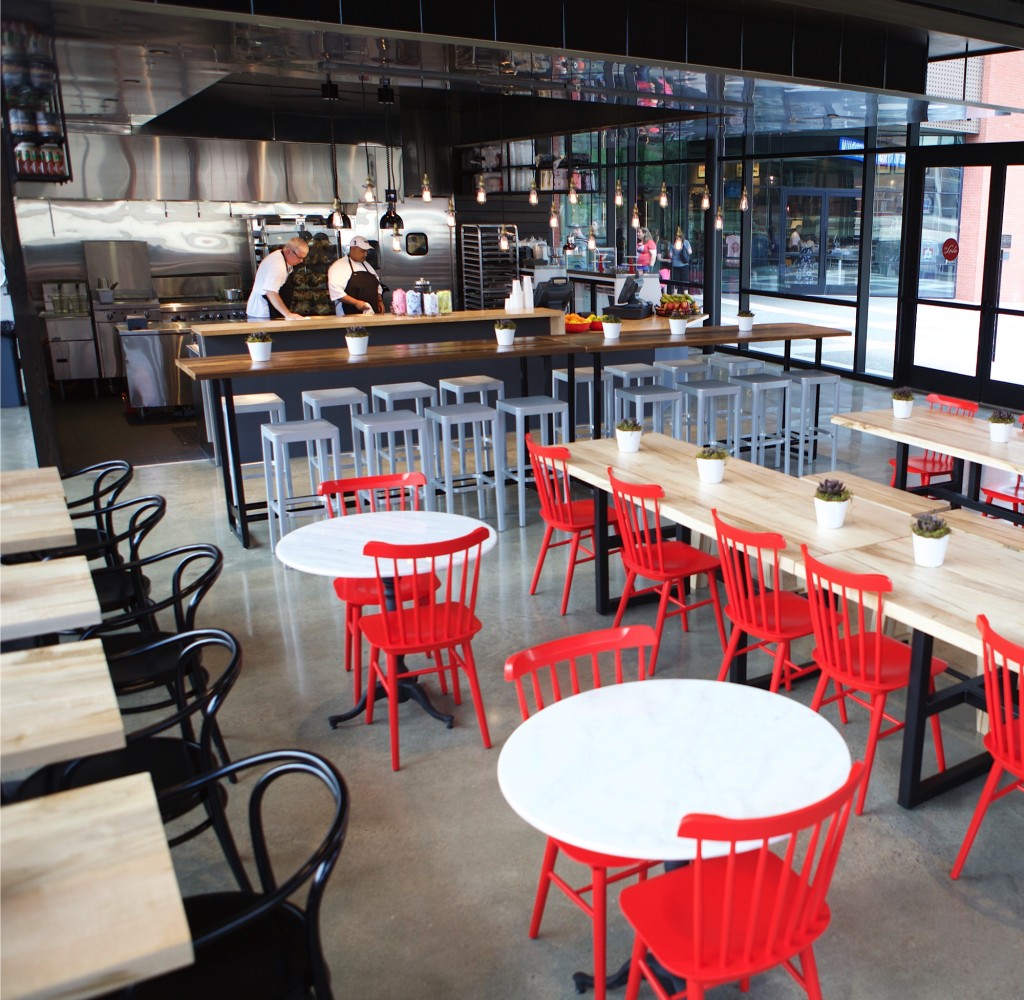 In another nod to Lula Naff, a new restaurant has been added bearing her name, Cafe Lula. With floor-to-ceiling glass windows on three sides and a covered patio, the cafe, located just outside the Ryman’s main entrance, will cater to tour visitors, concert-goers, downtown office workers and residents alike.

Cafe Lula is open daily from 7 a.m. to 7 p.m. with extended hours during Ryman events. Serving Springer Mountain Farms chicken, the menu features fresh, healthy fare with an emphasis on rotisserie cooking and locally-sourced ingredients available for both dine-in and grab-and-go service. The cafe also includes an espresso bar featuring locally roasted and specially blended coffees, which transforms into a full service bar each afternoon.

As part of the renovation, the Ryman has doubled the size of its gift shop. The new store offers exclusive Ryman-branded items as well as an activity station where visitors can make their own custom t-shirts and posters and listen to music before they purchase. Users also have the opportunity to shop the Ryman e-commerce site at the activity station.

Joe Kleimanhttp://wwww.themedreality.com
Raised in San Diego on theme parks, zoos, and IMAX films, InPark's Senior Correspondent Joe Kleiman would expand his childhood loves into two decades as a projectionist and theater director within the giant screen industry. In addition to his work in commercial and museum operations, Joe has volunteered his time to animal husbandry at leading facilities in California and Texas and has played a leading management role for a number of performing arts companies. Joe previously served as News Editor and has remained a contributing author to InPark Magazine since 2011. HIs writing has also appeared in Sound & Communications, LF Examiner, Jim Hill Media, The Planetarian, Behind the Thrills, and MiceChat His blog, ThemedReality.com takes an unconventional look at the attractions industry. Follow on twitter @ThemesRenewed Joe lives in Sacramento, California with his wife, dog, and a ghost.
Share
Facebook
Twitter
Linkedin
Email
Print
WhatsApp
Pinterest
ReddIt
Tumblr
Previous articleMummies of the World Take Over Orlando Science Center for Limited Run
Next articleKevin Murphy Joins Attraktion! as VP of Sales

cavlo adds more panel discussions for its May trade show