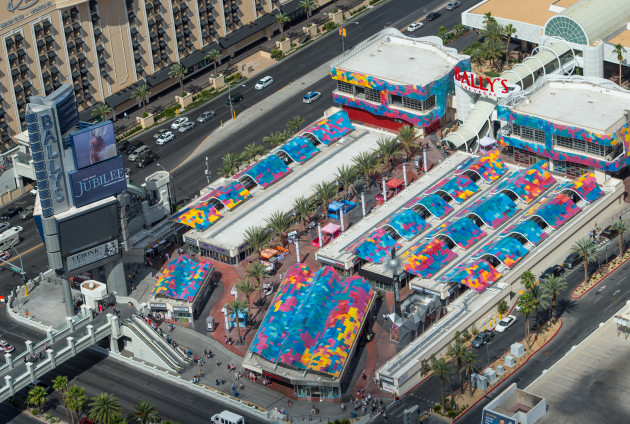 The Starburst and the lighting and music shows help to blend a shopping experience with a party experience, differentiating the Grand Bazaar from other retail settings.”

Chatuchak Market in Bangkok. Temple Street, Hong Kong. London’s Portobello Road…The world’s great open-air markets have always had a feeling of mystery and excitement that is tough to find back home in the United States.

Or is it? Now that the Grand Bazaar Shops are open (since fall 2015) at the entrance to Bally’s Las Vegas, Americans can get a taste of these exotic markets, combined with the comforts and convenience of a more traditional retail development.

The project is the result of a partnership between Caesars Entertainment and JGB Vegas Retail Lessee, LLC. Grand Bazaar Management Services, LLC (a subset of Juno Property Group) manages the development.

“The Grand Bazaar Shops are unlike anything else you will see,” explains Allen R. Bowman, General Manager at Grand Bazaar Shops. “We worked hard to create a more authentic and engaging experience than typical brick and mortar stores.”

One big difference is the intimacy of these shops. Most are just 350 square feet, about the size of a nice hotel room. With space at a premium, merchants put forward only their best products.

There is an international flavor to the shops at this unique retail destination – with English dry goods in one, hand-made cosmetics in another, wearable art, jewelry, spices, candy, gifts, and even a shop devoted to Turkish ice cream.

A great deal of the atmosphere is created by colorful, wave-shaped roofs that top each bank of shops. These serve as a huge electronic canvas that displays an immersive sound and light show visible from above and below.

Towering above the market is the Swarovski Crystal Starburst, lit up twice each night with a special sound and light show. It is directly in front of Bally’s and across from the Fountains of Bellagio, at Flamingo Road and Las Vegas Boulevard – the busiest pedestrian intersection in the city and one of the busiest in the world – a site that more than 20 million people walk through each year.

“There is only one other crystal ball comparable to this in the United States, the one in Times Square,” Bowman says. The Starburst and the lighting and music shows help to blend a shopping experience with a party experience, differentiating the Grand Bazaar from other retail settings.” 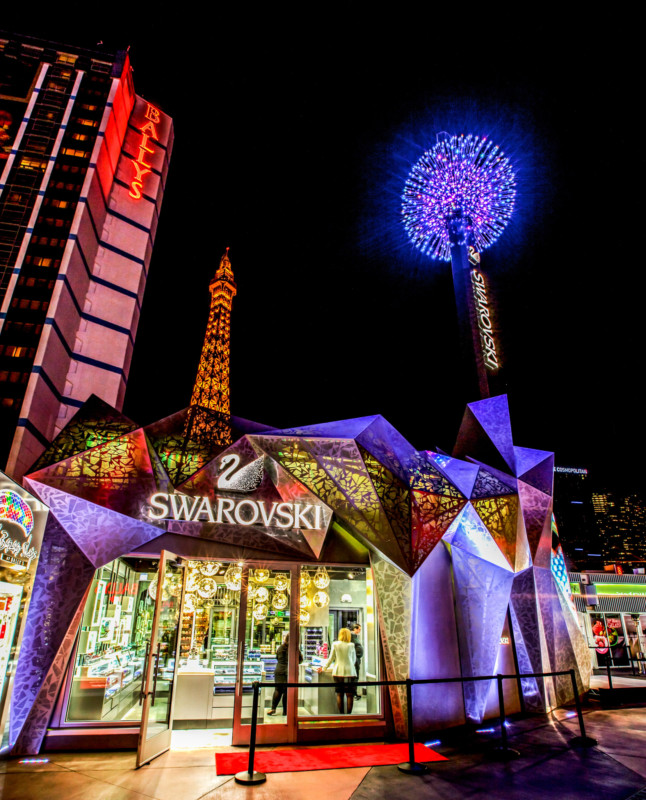 In creating this unique marketplace, Bowman explains that the design team faced a number of unique challenges. “Keep in mind that when developers build a regional mall of 130 to 150 tenants, they put them on a site of 90 acres or more,” says Bowman. “Here we have over 120 tenants on a two-acre site, the density of which has never been seen before in the United States.”

The choice of the design and construction teams was crucial. Bergman Walls & Associated (BWA) and DCC Architects shared roles as the designers and Architects of Record. The Penta Building Group was the General Contractor. Management also charged DCC Architects to create the site plan and Elkus Manfredi the roof design, with Grand Canyon Development serving as the owner’s rep. JBA’s Artistic Engineering Group, headed by Director Rob Pourciau, designed the audio, performance lighting shows and show control network, with the help of JBA’s technology and electrical engineering group, that designed the network and electrical infrastructure that delivers them. BWA designed the Swarovski building, signage specialist YESCO created the Swarovski Crystal Starburst, and integrator PSX handled the AV installations.

“Without these companies, the light show would either not exist or would not come close to the appeal it has today,” Bowman says. “Rob Pourciau and the JBA team, we believe, are truly global experts. Their creations are absolutely spectacular.” 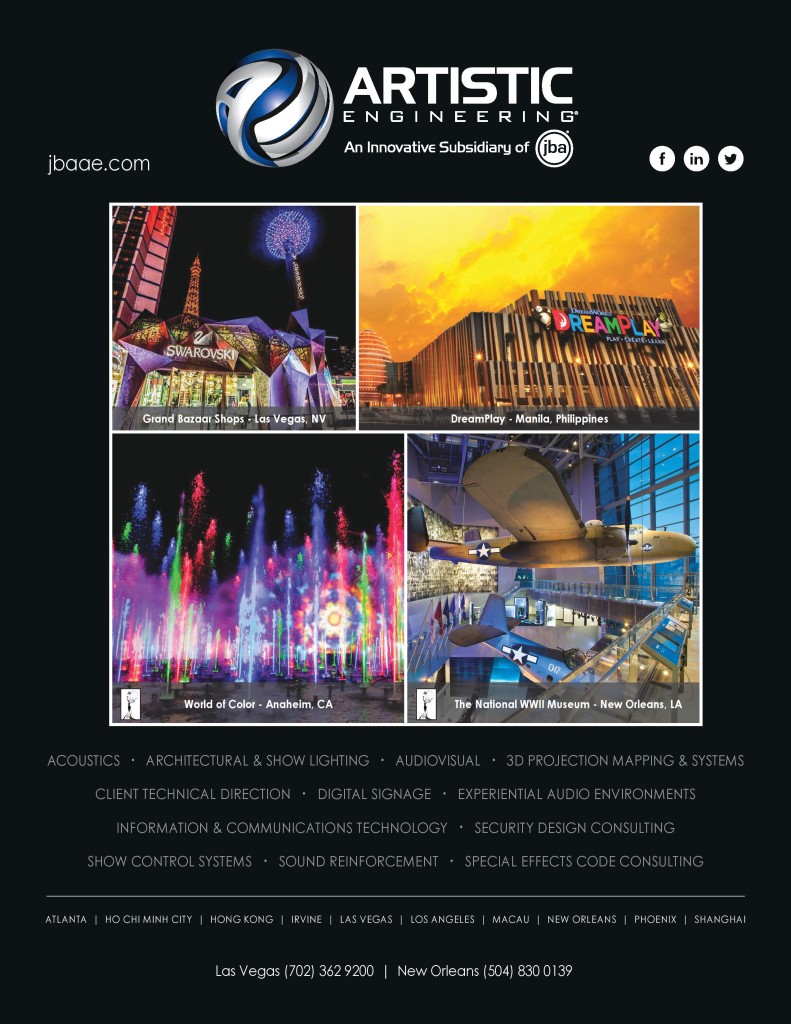 “It was a happy chain of events that brought us together with the developer,” Pourciau recalls. “I was able to help them understand how the Grand Bazaar theme could be extended to create an immersive environment that would attract shoppers and keep them there—that would prompt them to say, ‘Wow, this is great. I need to come back with my friends.’” (Repeat visitation is the lifeblood of any destination, even at the busiest intersection in Las Vegas.)

“Rob and his team designed the audio and lighting aspects of the project along with a kind of a jukebox of songs and light shows, from classic Las Vegas to modern fun,” Bowman adds. The programming changes constantly throughout the day and night, arranged into three to four-minute segments that start every 15 minutes. At 9:00 p.m. and midnight, the Swarovski Midnight Celebration takes over, and the JBA team feeds that music into the Grand Bazaar multimedia system, so it plays throughout the shops, accompanied by complementary lighting effects.

A Medialon media server and show control system synchronizes all of the special effects and makes it easy to upload new shows digitally from the JBA office in New Orleans. The Artistic Engineering team varies the shows by the time of day and by the season, and they continuously create new shows for holidays and special events.

Clint Gordon, Senior Project Manager, Electrical, for JBA says that in many ways the infrastructure for The Grand Bazaar Shops is more straightforward than for other retail developments.

According to Gordon, because the multimedia system is based on intelligent color-changing LEDs, it uses only 10% of the power that more traditional theatrical lighting would require. Aside from the food vendors, the power requirement for most shops is small. “We created a basic electrical infrastructure, but then provided separate distribution panels for the larger units and a few of the smaller shops that have higher demands for power,” Gordon explains.

“We used an existing tunnel system that had been installed back when the area was used for special events by Bally’s,” explains David Wells, JBA Director of Technology. “We created an MDF (main distribution frame network), essentially a small data center, in a utility room beneath the Grand Bazaar, then ran conduit to nine smaller utility rooms serving all of the shops.” The biggest challenge, he adds, was providing Wi-Fi throughout the property, given the interference expected from the metal in the colored roofs. “We worked with Cox to make sure everyone has good coverage.”

The fire protection planning was challenging, mainly because the fire codes were written with larger retail structures in mind. Fire protection consultant Michal Turczyk worked with the Las Vegas building department to designate each group of shops as a single building for the purposes of planning. “Michal created an egress plan that made sense for the unusual layout, while, in electrical, we helped with exit signs and emergency lighting,” Gordon says.

“Here in Las Vegas, we set out to create a destination, an outdoor shopping and dining experience with rich colors, sounds and smells that delight all the senses,” Bowman adds. “We feel we have captured all the excitement and intrigue an international marketplace has to offer.” • • •