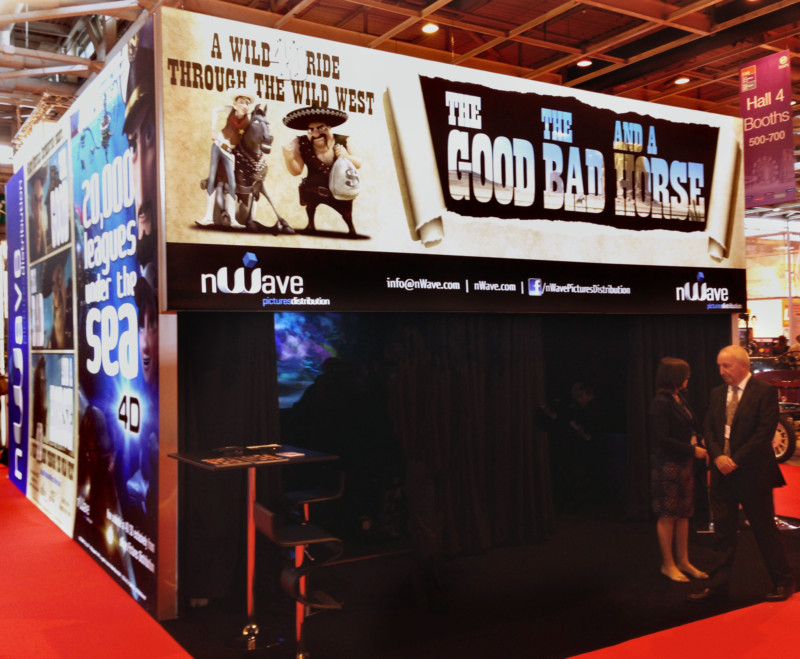 The future of 3D

Co-owner and co-founder of nWave Studios SA, Ben Stassen has been a director/producer of 3D films in the special venue market for over 20 years and made the jump in 2008 to feature films with the “Fly Me To The Moon” 3D release. He shares his thoughts on new technology and growth of 3D.

How can 3D improve and maintain its “wow” factor?

The future of 3D will depend on the industry’s willingness to switch to 48 frames per second (fps) projection systems. At 24 fps, the current mainstream standard, 3D filmmakers have to deal with a lot of technical limitations that greatly impact the creative process. One issue is strobing. At 24 fps, fast action scenes in 3D have a tendency to jump or stutter. Limiting the amount of 3D in the action scenes is more of a missed opportunity than a solution. As Peter Jackson demonstrated with his groundbreaking, HFR (high frame rate) release of The Hobbit, 48fps is the solution.

The bad news is that 48fps requires new production and new projection technologies. The good news is that all the new 4K projectors are capable of projecting at 48fps.

Yes, when it’s a movie like The Hobbit, or a movie like Gravity. The latter has received critical acclaim for its use of 3D as a great visual art, and has stimulated an increase in 3D viewership. Eighty percent of box office revenue for Gravity is from 3D attendance. Audiences are excited about 3D when it is visually stimulating and enhances the emotion of the characters – in this case, emphasizing the emotions of the main character’s isolation in space.

But apart from a few outstanding productions such as the two named above, in my observation very few Hollywood ventures into 3D have enriched the medium or justified the cost.

What is new and exciting in the future of Ben Stassen and nWave?

More and better content – as we continue to work in features as well as the specialty cinema sector, and transmit the experience and assets from one to the other. When we ventured into feature filmmaking in 2005 (Fly Me To The Moon), we were uncertain the move would pay off. The feature film business model seemed far more risky and unpredictable than what we’d been used to. But it did work out for us and has given us a real edge in the specialty arena. We are currently starting production on our sixth feature, and thanks to careful planning, we have been able to combine the production of quality, high-end attraction films at a reasonable cost using the feature assets. There is no way we could produce specialty 4D films like TurtleVision, Sammy & Ray or the upcoming The House of Magic independently from our feature film production pipeline. They would be too expensive and the business model would not work. But this way, we deliver a high quality film to our specialty customers while generating ancillary revenues for the feature productions. It’s a win-win situation.

nWave reports that it is growing in production, distribution and diversification. The company, which recently marked its 20th anniversry, has added employees and developed a marketing department with Julien Bollee as Chief Marketing Officer and Senior VP, Strategy & Sales.

This year at the IAAPA Attractions Expo in Orlando, nWave will demonstrate a JPEG DCinema theater in its booth – the same model of theater that is installed in cinemas, giant screen venues and some amusement parks including Cedar Fair properties. Eric Dillens, Chairman, nWave Studios SA describes this theater as “competitive quality with the local cinema or even better. Clients will be able to view 3D at a higher and brighter resolution which improves the quality of immersive 3D for their audience.”

The 3D projection system for this theater is provided by RealD. Meg Wilson of RealD describes the setup as “high quality and high value, using an affordable NEC 900 projector with nWave’s superb 3D content delivered on DCI digital cinema packages with RealD 3D.”[/box] 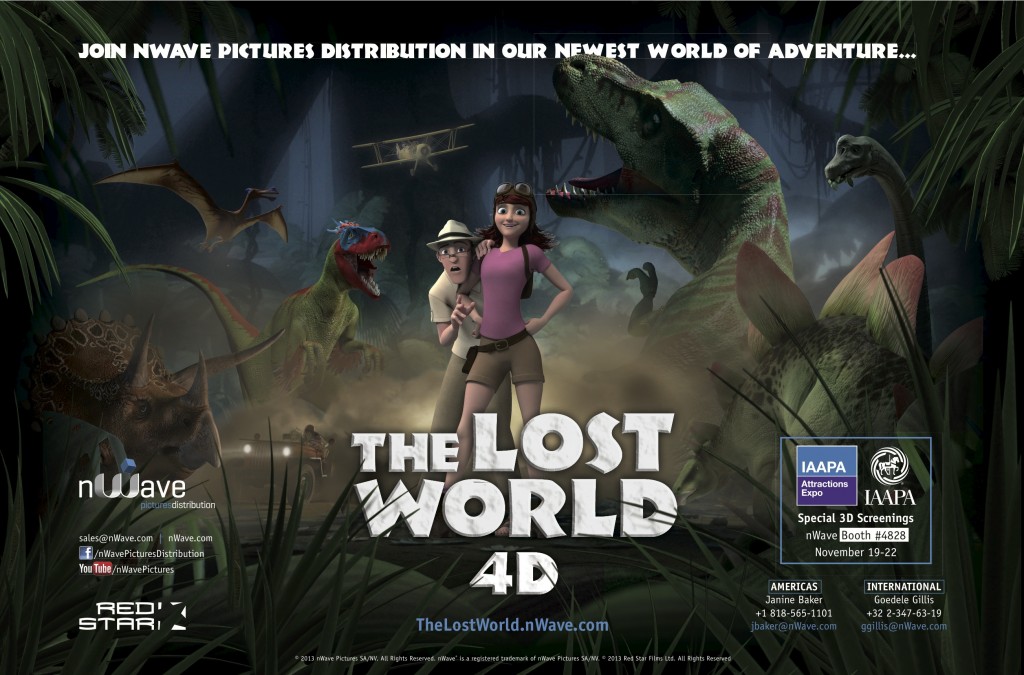 What is your reason for attending the IAAPA Attractions Expo?

Dean Briere: I believe it is important to understand what is being offered in the attractions industry. Although science centers, zoos and aquariums are organizations with educational missions, we still are businesses that compete for the leisure time and dollars of our guests. Understanding all aspects of how guests use their leisure time and dollars is important to creating a competitive business model. Moreover, guests are looking for more experiential opportunities. Since no one organization can be everything to all people, developing partnerships is important to meet this need. The IAAPA expo is effective at bringing the attractions world and the education world together.

Jessica Packard: We’re always looking for ways to stay relevant, fun and entertaining and IAAPA helps to keep us in the loop on the latest and greatest.

Has 3D exhibition altered or helped increase the flow of attendance to your facility? Has it contributed to the educational mission?

Dean Briere: It is incumbent upon science centers to use appropriate ways to communicate science to generate a more scientifically literate world population. The 3D giant screen theater allows us to offer educational content that complements the interactive exhibit experiences in the science center. We often pair a traveling exhibition with a giant screen 3D film. We have found that the combination increases attendance more than either could do alone. The pairing enables visitors to gain a greater understanding of the subject, and that helps achieve our larger educational objective.

Jessica Packard: The best way for our visitors to learn and experience the Museum is through interactive and hands-on exhibits. Technology has helped our museum improve and showing 3D films has added a “fun” component to the Museum. It captures all audiences whether they’re interested in aviation or not.

How has technology changed the science center?

Dean Briere: Science centers by their nature are inclined to be aware of developments in technology, and have often been at the forefront of high-tech educational exhibition. We were early adopters of giant screen film exhibition, and now we are early adopters of cutting edge digital cinema. While the exhibits themselves may tend to use tried-and-true components, the things that support the exhibit experience – such as digital cinema, 3D presentations and interactives – will trend toward the latest technologies.

Jessica Packard: We have an older audience of grandparents who watched Neil Armstrong take his “giant step for mankind”,and they are thrilled to experience this event with their grandchildren through 3D and the newest technology of immersive entertainment and learning. • • •

[box] Catching up with Janine Baker

Janine Baker has been a constant, effervescent presence at trade events and conferences including those of IAAPA, ASTC, GSCA and AAM since she joined the industry in 1998. Recently, as she battled cancer, her colleagues have missed that presence and have been rallying for her recovery, and cheering her recent reappearance on the scene at GSCA in Ottawa. In her own words: 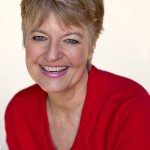 “I battled Stage 3 HER-2 breast cancer this last year and credit the love of my family and passion for my job that kept me motivated to fight and win the battle against cancer. One of my favorite shows to attend is IAAPA. When I found out I had an aggressive cancer prior to last year’s show, I begged my doctors to let me go for a few days prior to starting chemo – they agreed. And now, after 6 rounds of intense chemo and two surgeries, I am excited to be cancer free and celebrate with my nWave co-workers at IAAPA. I never stopped working and credit the supportive team at nWave as part of the reason for my success in beating this disease. The only sad note for me is the passing of a young man, Chad Mather, from this industry whom I worked closely with for five years at SimEx-Iwerks. I was starting my first day of chemo when I received the email that he had died from cancer. I was devastated. We had a lot of great times together at IAAPA and the last time I saw him was at IAAPA 2011 in which he honored me with a great compliment and gave me a big hug. He made me laugh, and he made me smile. His unfortunate passing makes me value my luck and life even more as I attend this 2013 IAAPA. I love my life, my job, its challenges, the ups, the downs, and am so fortunate to continue the best roller coaster ride I have ever been on and it only gets better.”[/box]