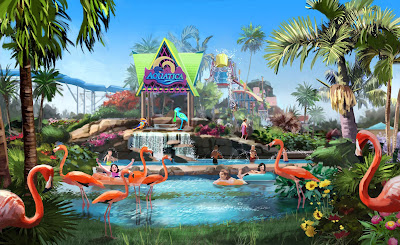 SeaWorld will make significant changes over the off-season transforming the park into an Aquatica: “These parks reflect the highest standard of quality in attractions, entertainment and theming, but the presence of animals makes the experience something truly special. Aquatica San Diego, like its sister parks, will feature guest experiences with a variety of exotic animals,” said Jim Atchison, President and Chief Executive Officer of SeaWorld Parks & Entertainment. “Having animals in our Aquatica parks adds an educational component to a waterpark visit that is both unexpected and enriching.” 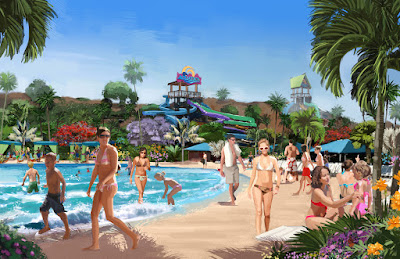 The first Aquatica opened adjacent to SeaWorld Orlando in 2008. It is now among the nation’s most visited waterparks, with annual attendance of roughly 1.5 million guests. In addition to birds and tropical fish, Aquatica Orlando features Dolphin Plunge, the park’s centerpiece water slide, which includes an enclosed acrylic slide that allows riders to see animals underwater.

Last year SeaWorld San Antonio unveiled its own Aquatica, with some of the region’s best ride attractions, along with displays of kookaburra, spoonbills and southern stingrays.

“When the gates of Aquatica San Diego open for the first time next June, guests will see what visitors to Orlando and San Antonio already know: No theme park company can deliver a waterpark experience quite like SeaWorld,” said John Reilly, President of the company’s San Diego attractions. “Aquatica will be a great complement to SeaWorld and help us continue to bring value to our guests and enhance this destination.”

Aquatica San Diego will be located at 2042 Otay Valley Rd. in Chula Vista, Calif. Terms of the deal, which have been under negotiation for several months, were not disclosed.

A global leader in animal care and conservation, SeaWorld Parks & Entertainment cares for more than 67,000 animals including 200 endangered or threatened species. This commitment extends to animals around the world: The company operates one of the world’s most respected animal rescue and rehabilitation programs. SeaWorld has assisted more than 22,000 orphaned, injured or ill animals over four decades.

Joe Kleimanhttp://wwww.themedreality.com
Raised in San Diego on theme parks, zoos, and IMAX films, Joe Kleiman would expand his childhood loves into two decades as a projectionist and theater director within the giant screen industry. In addition to his work in commercial and museum operations, Joe has volunteered his time to animal husbandry at leading facilities in California and Texas and has played a leading management role for a number of performing arts companies. Joe has been News Editor and contributing author to InPark Magazine since 2011. HIs writing has also appeared in Sound & Communications, LF Examiner, Jim Hill Media, and MiceChat. His blog, ThemedReality.com takes an unconventional look at the attractions industry. Follow on twitter @ThemesRenewed Joe lives in Sacramento, California with his fiancé, two dogs, and a ghost.
Share
Facebook
Twitter
Linkedin
Email
Print
WhatsApp
Pinterest
ReddIt
Tumblr
Previous articleSome events we’re looking forward to in 2013
Next articleAttractions Industry Professionals Raise $81,000 for Give Kids The World with Golf Tournament, Motorcycle Ride, and Fun Run at IAAPA Attractions Expo 2012