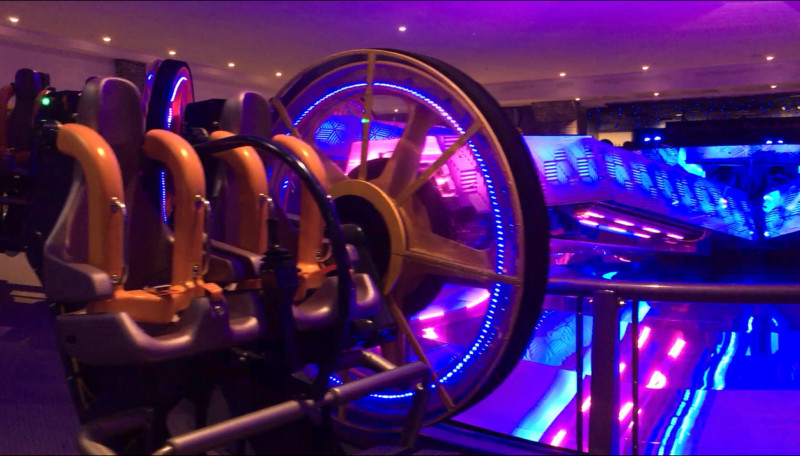 Galaxyland in West Edmonton Mall debuted their newest ride with a free ride event on December 1st. The ride is the Chance Rides Unicoaster, decked out with 15,360 RGB LED lights, provided by EWorks Pro. Each individual light can produce up to 32 different colors, with the light display bouncing off the chrome-like center hub and sweeps. The Unicoaster is a rider controlled experience, allowing riders to control the spinning action with a joystick. The ride can go from mild to wild at the riders’ choosing – pressing the joystick forward makes the seat roll forward, pressing the joystick backwards makes the seat roll backwards. Leaving it steady results in a calm ride over the undulating track.

The people at Galaxyland put more control in the hands of their ride fans when they conducted a contest to name the new ride. The overwhelming favorite and winning name is Zero Gravity. The post on Facebook announcing the contest received over 800 comments and name suggestions. The winner of the contest has received a one year pass for unlimited rides at Galaxyland.

More information about Galaxyland and their new ride can be found on their Facebook page: www.facebook.com/wemattractions.

Joe Kleimanhttp://wwww.themedreality.com
Raised in San Diego on theme parks, zoos, and IMAX films, Joe Kleiman would expand his childhood loves into two decades as a projectionist and theater director within the giant screen industry. In addition to his work in commercial and museum operations, Joe has volunteered his time to animal husbandry at leading facilities in California and Texas and has played a leading management role for a number of performing arts companies. Joe has been News Editor and contributing author to InPark Magazine since 2011. HIs writing has also appeared in Sound & Communications, LF Examiner, Jim Hill Media, and MiceChat. His blog, ThemedReality.com takes an unconventional look at the attractions industry. Follow on twitter @ThemesRenewed Joe lives in Sacramento, California with his fiancé, two dogs, and a ghost.
Share
Facebook
Twitter
Linkedin
Email
Print
WhatsApp
Pinterest
ReddIt
Tumblr
Previous articleClip ‘n Climb Opening Reaches 100 Milestone
Next articleEnvironmental Street Furniture Participates in IAAPA Attractions Expo as Company Expands Globally