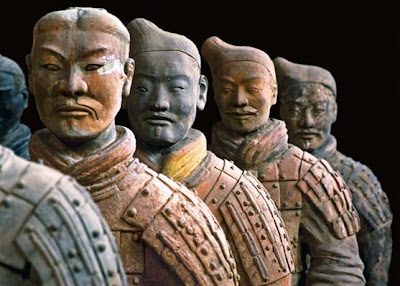 New York, NY, USA (April 16, 2012) /PRNewswire/ — Terracotta Warriors: Defenders of China’s First Emperor, a new immersive exhibition of one of the most significant archaeological discoveries in modern time, is set to make its Northeast U.S. debut in New York City at Discovery Times Square (226 West 44th Street) on April 27. The exhibition will feature artifacts dating back to 221 BCE, including the world premiere of a set of gates from an ancient Han burial chamber, the U.S. debut of more than 20 artifacts, and an up-close look at 10 of the authentic, life-sized clay soldiers and their armor.

Standing more than six feet tall and weighing 600 pounds each, the terracotta soldiers were created more than 2,000 years ago with unprecedented craftsmanship to protect China’s First Emperor, Qin Shihuangdi, in his afterlife. After founding the first united China, Qin Shihuangdi was responsible for building and unifying various sections of the Great Wall of China and a massive national road system that has continued to evolve over centuries.

Since its accidental discovery in 1974, the Terracotta Army continues its legacy as one of the most sought after collections of artifacts from ancient China. The exhibition created and produced by Discovery Times Square in partnership with China Institute will provide a unique way of understanding China’s history.

“Since its founding in 1926, China Institute has advanced a deeper understanding of China through exhibitions and programs in education, culture and art. We are very pleased to partner in this groundbreaking exhibition, bringing the Terracotta Warriors and the history they represent to New York,” said Sara Judge McCalpin, President of China Institute.

James Sanna, CEO of Discovery Times Square, added: “It’s a great honor to have the opportunity to work with these legendary artifacts and craft a one-of-a-kind experience immersing visitors into a time that was so influential in shaping China’s history. We are proud to partner with New York’s China Institute, the Shaanxi Provincial Cultural Relics Bureau, and the Shaanxi Provincial Museum Association to present these artifacts here in the heart of Times Square.”

The exhibit contains three chronological exhibition stages. Upon entry, visitors will first learn the history of the Qin Dynasty and the First Emperor’s rise to power, followed by the significance of the Terracotta Warriors, and the peaceful life of the ensuing Han Dynasty, which established essential Chinese traditions still reflected in Chinese society today.

In addition to the Terracotta Warriors and burial chamber gates, more than 200 additional artifacts and treasures will be displayed, including a bronze ritual vessel “He” (water or wine container), a “Lai” Ding (cooking utensil), and gold pendants and ornaments.

China Institute advances a deeper understanding of China through programs in education, culture, business and art in the belief that cross-cultural understanding strengthens our global community. Founded in 1926 by a group of American and Chinese educators, China Institute in America is the oldest bicultural non-profit organization in the U.S. to focus exclusively on China. The organization promotes the appreciation of Chinese heritage and provides the historical context for understanding contemporary China. Programs, activities, courses and seminars are offered on the visual and performing arts, culture, history, music, philosophy, language and literature for the general public, children, and teachers, as well as for business. China Institute Gallery, established in 1966, is distinct among the museums of New York City. It was the first in the United States to showcase Chinese art exclusively on a regular basis. Today, China Institute Gallery is New York’s only non-commercial exhibition space solely dedicated to Chinese art and is known for its innovative thematic and scholarly exhibitions, publications and related art education programs.

Joe Kleimanhttp://wwww.themedreality.com
Raised in San Diego on theme parks, zoos, and IMAX films, Joe Kleiman would expand his childhood loves into two decades as a projectionist and theater director within the giant screen industry. In addition to his work in commercial and museum operations, Joe has volunteered his time to animal husbandry at leading facilities in California and Texas and has played a leading management role for a number of performing arts companies. Joe has been News Editor and contributing author to InPark Magazine since 2011. HIs writing has also appeared in Sound & Communications, LF Examiner, Jim Hill Media, and MiceChat. His blog, ThemedReality.com takes an unconventional look at the attractions industry. Follow on twitter @ThemesRenewed Joe lives in Sacramento, California with his fiancé, two dogs, and a ghost.
Share
Facebook
Twitter
Linkedin
Email
Print
WhatsApp
Pinterest
ReddIt
Tumblr
Previous articleRegistration Now Open for IBC Conference, London
Next articleIPM Presents Asian Casino Report, Part 3: Gambling Laws and the Megacasino

“The Hunger Games: The Exhibition” Designed by Thinkwell to Premiere July 1 in New York