ABOVE: The Hunger Games: The Exhibition is a 12,000 square-foot exhibition whose costumes, props, set recreations and interactive experiences deliver a dynamic fan experience. Images courtesy of Marion Curtis.

The Hunger Games: The Exhibition will have a six-month run at Discovery Times Square before moving to San Francisco’s Palace of Fine Arts in February 2016. The exhibition comprises seven galleries telling the story of Katniss’s epic journey from tribute to revolutionary. Lionsgate created the exhibition in close collaboration with the Thinkwell Group and produced it in partnership with Imagine Exhibitions.

Electrosonic met the dual challenges of a rapid production schedule coupled with the need to engineer and fabricate the exhibition as a touring system to be set up in multiple venues over the years.

“This is a traveling show so it was designed to be modular,” says Electrosonic Project Manager, Steve Calver. “Our support for the exhibition is not unlike what we do for permanent exhibitions but with a different form factor. There are 18 rolling equipment road rack cases plus another 40 robust rolling road cases for show control, interactivity and sound distribution. Everything is designed and packaged for quick set up and tear down while maintaining simple and reliable connectivity. For example, Jan-Al designed custom cases for all the speakers so they could be packed with their mounts attached.”

“We’ve done a lot of traveling shows,” notes Electrosonic Show Systems Engineer, Will Guest. “They are like enormous interactive puzzles. Putting the show together is a show in itself, but we have given the exhibition the tools and features to make installation easy. The Hunger Games: The Exhibition was a more complex traveling show than usual, but it came together quickly thanks to all the participants. It was a fun, creative show to work on.”

Electrosonic’s involvement in the exhibition begins with the preshow queue area where the Hall of Justice façade is projection mapped onto a three-dimensional set piece, which becomes the entry to the District 12 gallery. Panasonic projectors with ultra short-throw reverse lenses sit side by side to warp the architectural imagery onto the set piece. A 7thSense server, in mesh mode, aligns 3D CAD files of the architecture onto the dimensional surface of the set. Electrosonic provided mock-ups and consultation for the projection mapping system prior to installation.

Once inside the District 12 gallery, visitors are introduced to Panem. A stylized interactive map, with an “Easter egg” that displays the hidden District 13, takes the form of a 55-inch CyberTouch touchtable in a custom enclosure.

Visitors board the luxurious Tribute Train to see numerous props and artifacts from the films. Electrosonic created the audio environment for the soundscape. A QSC Q-LAN system performs the digital audio playback; QSC speakers are mounted in overhead truss as well as in the train car’s set pieces.

In The Capitol gallery, Electrosonic facilitated the magic of the interactive Cinna’s Sketchbook. A Panasonic projector pointing straight down onto the pages of the book displays illustrations, text and video content that appear and disappear as visitors turn the pages.

Making the Games explores the art and science behind The Hunger Games. Visitors get to test their stunt skills in front of a centrally-placed 40” Samsung monitor, with two 65-inch Samsung monitors on either side, hung in portrait mode. A stunt coordinator shown on the monitors performs a move seen in The Hunger Games, and then visitors try to replicate it; Microsoft Kinect compares an image of the visitors’ movements to those of the stunt coordinator. The exhibit is powered by custom NLE Systems computers.

Visitors get to be filmmakers themselves in the District 13 gallery. Electrosonic installed four kiosks with 22-inch Samsung monitors and touch interfaces where visitors can edit their own short propaganda film or ‘propo.’ Rosco flat LED panels provide illumination for the photo shoots. 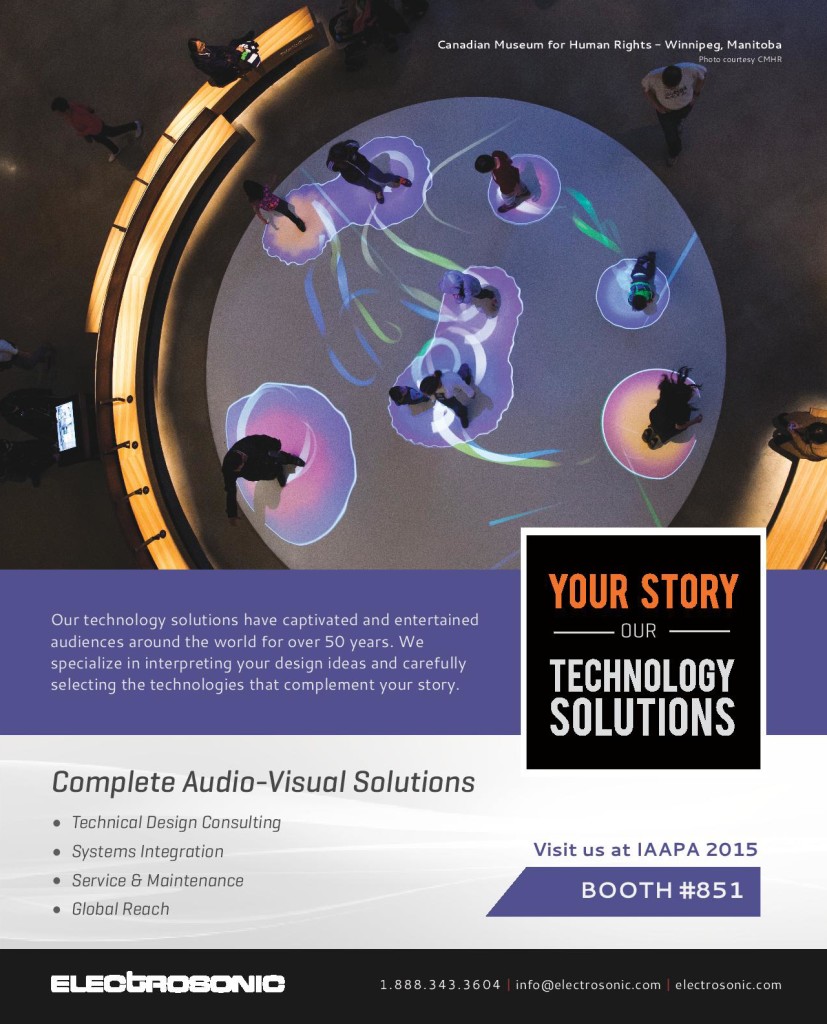 Joe Kleimanhttp://wwww.themedreality.com
Raised in San Diego on theme parks, zoos, and IMAX films, InPark's Senior Correspondent Joe Kleiman would expand his childhood loves into two decades as a projectionist and theater director within the giant screen industry. In addition to his work in commercial and museum operations, Joe has volunteered his time to animal husbandry at leading facilities in California and Texas and has played a leading management role for a number of performing arts companies. Joe previously served as News Editor and has remained a contributing author to InPark Magazine since 2011. HIs writing has also appeared in Sound & Communications, LF Examiner, Jim Hill Media, The Planetarian, Behind the Thrills, and MiceChat His blog, ThemedReality.com takes an unconventional look at the attractions industry. Follow on twitter @ThemesRenewed Joe lives in Sacramento, California with his wife, dog, and a ghost.
Share
Facebook
Twitter
Linkedin
Email
Print
WhatsApp
Pinterest
ReddIt
Tumblr
Previous article
Temporary Park, Permanent Fun
Next article
The Network