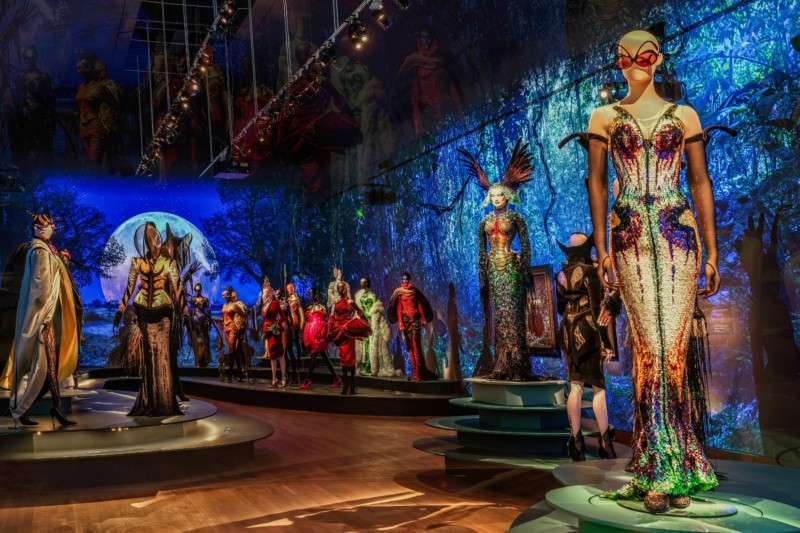 Seeking to enhance their exhibits and create a truly unique experience for guests, three museums have recently embraced these technologies.

Bringing haute couture to life in the exhibition “Thierry Mugler: Couturissime” was no small feat. The first retrospective on the iconic couturier, photographer, director and perfumer, “Thierry Mugler: Courturissime” drew more than 290,000 visitors to the Montreal Museum of Fine Arts (MMFA). The exhibition brought together over 150 outfits, as well as accessories, theater costumes, videos, film clips, rare prints and unpublished sketches, with projection throughout the exhibit powered by Christie 1DLP® projectors.

Born in France, Mugler’s career began in 1973 with the launch of his first collection, followed shortly thereafter with the opening of his first store in Paris. He went on to outfit celebrities, including David Bowie, Lady Gaga and Diana Ross, and create costumes for Beyoncé, Cirque du Soleil and Comédie-Francaise. His legacy as one of the great haute couture and prêt-à-porter designers is well-established, but the challenge remained: how do you showcase such a prolific career?

An operatic display of fashion

Conceptual planning for “Thierry Mugler: Couturissime” started in spring 2018 with the museum team mapping out the flow of the exhibit and planning for the inclusion of projection technology. The exhibition is laid out as an opera in six acts, moving from act one “Macbeth and the Scottish Lady,” through to the final act, “Futuristic and Fembot Couture.”

Says Sandra Gagné, Head of Exhibitions Production, MMFA, “The variety of themes and ideas presented in the show required versatile equipment that could lend itself to different atmospheres going from the dark and haunted ambience of ‘Macbeth,’ to the immersive fantastical jungle of ‘Metamorphosis.’ At this stage, the Christie team was of great help in guiding us to the ideal product, as well as helping us with the position of the projectors in the rooms.”

The projection is used in three acts. In “Macbeth,” guests enter the exhibit and are greeted by costumes designed by Mugler for La Tragédie de Macbeth and a hologram of Lady Macbeth created by the multidisciplinary artist Michel Lemieux for 4D Art, Montreal. Says Gagné, “The hologram projection opens the visitors’ route with an enveloping performance; the sleepwalking queen is haunted by the blood she imagines on her hand and she ultimately descends slowly into madness.” This performance is the introduction to over 70 costumes that Mugler designed for the 1985 performance of Macbeth by Comédie-Française at Festival d’Avignon, for which he was given the biggest budget in the troupe’s 200-plus year history.

In “Stars & Sparkles: Staging Fashion,” video clips of Mugler’s pioneering work designing runway shows is projected onto a large screen at the end of the room, complementing the dramatic fashions on display. Mugler used his runway shows as a theatrical stage, combining haute couture with lighting, music and celebrity.

Mugler’s fascination with the animal world is on show in “Metamorphosis,” which used materials including crystals, rhinestones, feathers and thousands of hours of work to create a fantastical costume akin to a mythical creature. Mugler also drew inspiration from reptiles, insects and butterflies, and complementing these themes required a captivatingly immersive AV experience, which was created by award winning Montreal’s special effects studio Rodeo FX (Stranger Things, Game of Thrones).

“The Metamorphosis section is composed on a scenic immersive environment,” says Gagné. “The projections transport the visitors into the jungle, the desert, and the ocean to discover the flamboyant costumes designed by Mugler. The composition of numerous projectors in the room allowed for a mesmerizing panoramic experience.”

The MMFA required projectors that were high-resolution, yet powerful, dependable and low-maintenance. Says Gagné, “The weight of the projector was also crucial for transportation, as we needed a light yet reliable device, solid enough to withstand transport.” Christie GS Series projectors have performed admirably, with positive feedback from the public and the artist.

“Thierry Mugler: Couturissime” has been a resounding success for the MMFA, during its six-month tenure at the museum (March 2-September 8, 2019). “Projections and immersive visual work allow the visitors to discover the work of Thierry Mugler in a mesmerizing and captivating environment,” says Gagné. “Visual installations are a key feature of the exhibition, allowing a new public to discover the world of fashion design. People of all ages have been appreciating the exhibition since its opening!”

Chief curator of MMFA, Nathalie Bondil, says of the exhibit, “It includes not only thousands of works, pieces and accessories to be assembled, but also – because we opted for a spectacular dimension of installation and setting – immersive special effects and exceptional sets. Welcome to the theater of fashion. The curtain is rising!”

The MMFA’s exhibition is on display at Kunsthal Rotterdam from October 13, 2019 to March 8, 2020 followed by the Kunsthalle der Hypo-Kulturstiftung in Munich from April 3 to September 20, 2020.

The Panorama 6th October Museum in Cairo, Egypt, was established to commemorate the 6th October War which took place in 1973. Having been inaugurated in 1989, the eye-catching museum frontage – home to an array of military tanks and aircraft – drew visitors in to witness a commemorative panoramic mural which depicts Egyptian soldiers rushing the Bar-Lev Line on the Suez Canal.

Thirty years later, and the museum – operated by the Military Authority of Museums – had become dated and lacked the cutting-edge technology that museum visitors have come to expect. Following an extensive renovation, the museum has blended audiovisual technology with existing exhibits to help continue its educational mission in the most effective and captivating way.

With the aim of improving and modernizing the visitor experience, Egyptian integrator Audio Technology S.A.E was asked to equip a trio of halls at the museum with the latest audiovisual technology to bring an array of historical exhibits to life. In Hall One, a 3D-capable Christie Mirage projector has been installed as part of a 150-seat 5D cinema. The venue is used for showings of an FHD resolution 3D stereoscopic movie, which transports guests to the front lines of the war by highlighting a host of different battles, as well as lifting the lid on the Egyptian army’s preparations before the 1973 war.

In a further exhibit, six Christie 1DLP projectors were installed to create a striking U-shaped display which is used to showcase a film that gives an additional overview of the war in a bright and seamless 10k resolution display. The unique shape allows for the audience to feel a part of the video, as it fills their visual field, further immersing them in the content.

In a cylindrical room, nine Christie laser projectors were installed to create an impressive 360-degree screen projection. The unique display shows footage captured during the 2011 and 2013 revolutions that reflect the political situation in Egypt at the time. The immersive display matches the unusual shape of the museum building and provides the platform for a captivating educational experience.

A key challenge that was faced during the installation process was the issue of spacing. The projectors had to be mounted in tight spaces without any obstructions to hinder the display. This was an issue in the U-shape and 360-degree mapping rooms; due to the complexity of the projector arrays, it was important to ensure that none of the light beams were obstructed by other
projectors. Thanks to the compact sizes of Christie’s projectors the challenges were overcome using a special Christie mount that enabled the technology to fit into the spaces effectively, and by using the built-in warping and blending options in the projectors.

The museum has also been updated throughout, with 3D holograms of weaponry, digital signage displays, wireless tour guides, and even an exterior projection mapping display on the façade of the building.

“We couldn’t be more thrilled with how the new additions have transformed the museum, and the response has exceeded all our expectations,” explains Jacko Makram, Technical Design & Pre-Sales Manager, Audio Technology. “We’ve received great feedback from the operator, who has said that visitors have thoroughly enjoyed the experience, with much of the excitement stemming from the exclusivity of the project – this is the first time in Egypt that all of this technology has been combined together in one place. It’s important for us to show people this important time in history in an effective and immersive way that provides not only knowledge, but entertainment too. The client aspired to achieve a full day entertainment program for all ages, and we feel that the museum now proudly sits among Cairo’s other iconic locations.”

Situated on the banks of the river Tagus, in Belém – one of Lisbon’s most popular neighbourhoods for tourism, arts and culture – MAAT (Museum of Art, Architecture and Technology) is located in the city’s former power station with a total floor area of 38,000 square meters (409,000 square feet).

“We want the museum to be a beacon, not just for Portugal but for the whole world,” explained Rita Costa Gomes, Production Coordinator at MAAT. “With several exhibitions on the go at any one time, we need to be able to count on the right multimedia equipment for all our needs. And if we truly wish to be a benchmark, then we have to work with the highest quality brands. And as Christie offers the best professional projectors available in the market, the decision was easy for us.” Through the Christie partner Total AV, MAAT acquired 10 Christie 1DLP projectors, as well as 17 different lenses.

“We choose laser technology because it is the perfect solution for museums which are open seven days a week, given that they require virtually no maintenance and there are no lamp costs,” added Costa Gomes. “They have proven to be the best option to suit our needs. We have already used them in various exhibitions with different technical crews, and all the national and international artists involved have given them the thumbs-up. I have to say that we are more than delighted with the performance so far.”

Technology is enabling museums to tell compelling, engaging stories that draw in visitors. Whether it’s invisibly running in the background and letting the art shine, or used to create an interactive experience for guests, technology has become a de facto part of museums’ tool boxes. • • •