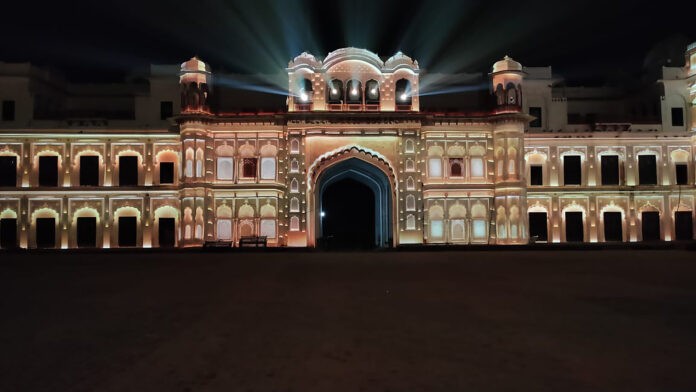 Located in the city of Patiala in Punjab, Qila Mubarak was first built as a mud fortress by Sidhu Jat ruler Baba Ala Singh in 1763, who was the founder of the Patiala dynasty. It occupies an area of 10 acres in the heart of the city, and also served as the residential palace of the Patiala Royal family. The complex is known for its majestic design facades that include Ran Baas (guest house), Darbar Hall (royal court) and Quila Androon (royal chambers), which is known for its 13 royal chambers adorned with scenes from Hindu mythology painted in Patiala’s art style.

“We’re very proud to be part of this unique and the first-of-its-kind architectural illumination project in India, where conventional lighting is replaced with 3D projection mapping to restore the grandeur of this magnificent fortress,” said Aarti Parwaney, director, Pyramid Technologies. “The magic of the historic structures has been meticulously recreated by highlighting the ornate designs on the entrances, works of bas-relief featuring geometrical, floral and other images to bring out the nuances from surrounding surfaces through projection mapping techniques.”

Sarvdeep Basur, founder partner and principal, Lucent Worldwide, added, “Qila Mubarak is a stunningly beautiful 18th century fort with its exteriors decorated with exquisite designs that highlight exceptional Patiala-style craftsmanship. We are proud to offer our expertise in lighting design to illuminate the facade of this majestic monument to rekindle the glorious, opulent past of the Patiala kings.”

A total of 27 Christie HS Series laser projectors with brightness levels of up to 20,000 lumens have been deployed for this endeavor. The projectors are fitted in Rover weatherproof IP55 enclosures throughout the Qila Mubarak complex, and the entire process was completed and commissioned over a period of three months.

“The execution team had to take special care during installation, since the building structures of Qila Mubarak are Punjab State protected monuments,” said Parwaney. “Before mounting the projectors on the roof, we conducted a thorough study to ensure that the load-bearing strength to mount the projectors in their housings, as well as the solar panels for powering the set-up would not cause any damage to the structure.”

Similar care was taken to overcome challenges to the line of sight at Darbar Hall due to tree cover in certain areas, said Parwaney, adding that the angle of mapping and support structures had to be modified accordingly to avoid causing any damage to the trees in the courtyard. “These modifications helped to maintain a clear line of sight for the projectors without any shadows. The projector housing structures were also customized so that they only protrude minimally from the backdrop and assimilate with the surroundings as much as possible,” she noted.